With alumni of former Gov. Jim Florio’s administration gathering at Drumthwacket tonight to celebrate the 20th anniversary of his election, Republican State Chairman Jay Webber couldn’t help but note what he said was irony.

“It’s just unbelievable to me that Jon Corzine and the Democrats want to celebrate one of the most disastrous governorships in New Jersey’s history,” said Webber in a phone interview today. “He’s giving them the Governor’s Mansion to hold the celebration.”

Corzine does not plan to be at the event, but Webber said that they must have gotten his permission to use the official governor’s residence.
The gathering comes a day after a new Quinnipiac poll shows Christie leading Corzine by 12 points, continuing an long, unbroken string of polls showing the Republican significantly ahead.

“Those numbers are astounding, and I guess the Florio alumni are in Drumthwacket celebrating the fact that their governor is no longer the worst in New Jersey history,” said Webber.

Republicans are delighted to draw parallels between Corzine and Florio, who was swept out of office in 1993 on the back of an anti-tax movement. Both their terms were marked by a deep recession that brought about tax increases, Webber said – in Corzine’s case, $2.8 billion (counting cuts in the property tax rebates).

“The parallels with the Jim Florio administration are frightening,” he said.

Democratic State Chairman Joseph Cryan responded that it was unfair to make a spectacle of a reunion for people who started working together 20 years ago.

"I think people in public service truthfully try to do the right thing, and his comments here are classless, and frankly show a level of inexperience," said Cryan about his 37-year-old counterpart.

"For a guy who's had to deal with Newt Gingrich and Mitt Romney, you'd think he'd have better things to worry about, like whether Chairman Steele is going to come back in and maybe bring Sarah Palin with him." 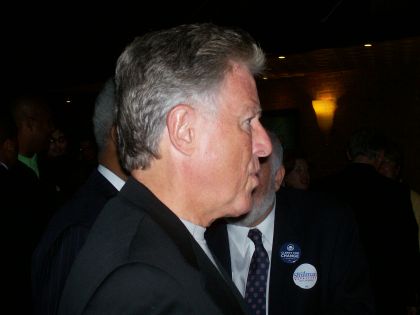