FRANKLIN -Setting out on its second day of the campaign three days after Corruption Thursday and the handcuffed image of Hoboken Mayor Peter Cammarano still dominanton the political landscape, theCorzine/Weinberg team attended the annual Indian American Festival this evening where the governor'snew running mate, thrown onto the ticket in the 11th hour apparently because of her street cred as a reformer,registered a ceremonial slamdunk.

"I come from Bergen County, from a diverse town where your community is very well represented," state Sen. Loretta Weinberg (D-Teaneck) tolda crowd of Indian Americans- as broad a mosaic as any with Hindus, Moslemsand Sikhs all in the mix,many in traditional dress, who had just been wowed by a children's dance act grooving to the soundtrack of "Slumdog Millionaire."

To the very cynical – or even just the casually cynical – the Academy Award winning film title might appropriately describe Wall Street vet Gov. Jon Corzine and his party at the moment, asthe governor's ownhometown mayor, Cammarano, andlarge handfulsof other political operatives stand accused of federal charges in a two-track corruption and money laundering case turning stomachs all up and down the state.

Followinga Friday in whichworried operativesstepped up phone callsto gauge – or prod – party interest in dumping Corzine, who'sapparentlystalled in the polls and trailing Republican Chris Christie, a former topcopknown for bustingbad guys,the Corzine campaign dug in and unveiled the progressive 74-year-old, Blue Jersey darlingWeinberg on Saturday as an obvious anitidote to bossism.

This evening, she worked the massive crowd, going stall by stall, hand by hand, at this, thetenth annual culture and crafts extravaganza, organized by the Hindu Temple and Cultural Society of U.S.A. and the Sri Venkateswara Temple and Community Center of Bridgewater.

Before a priestled a procession in homage to Vishnu throughthe airplane hanger-sizedroomful of arts and Indian crafts at the Garden State Exhibit Center,he handedCorzine's LG candidatea coconut and asked her to break it in front of the god to bless the journey.

Severalmen had already whaledaway on the concrete floor with their coconuts,finally and unevenly breaking the tough exterior of the fruit before stepping aside.

Now it was Weinberg's turn.

The senatorkicked off her heels, stepped forward, and spiked the coconut, splitting itcleanly on the first try.

"That's the way it's supposed to be done," said an elder, nodding amid other nods of approval.

This was the Corzine-Weinberg team's second official day of campaigning together, and its second event afterappearing in Paterson earlier tocall for additional gun control measures.

Having already joined the chorus of local politicians calling on Cammarano (and other mayors charged with corruption in Ridgefield and Seacaucus) to resign, the governorreceived a blessing at the temple up the road,then leapt onto the stage here with Weinberg at his side.

Heyelled "Namaste!" by way of greeting, and praised Indians' contributions to New Jersey.

"We have the most diverse community in America,"the governorsaid. "I love you all and I love coming here and seeing your arts. It's important we come together as you are doing today."

He received a big hand.

"Education is important to our community, and we have to show in this campaign how we have improved the state school funding formula under Gov. Corzine's leadership after 30 years of deliberation," said Assemblyman Upendra Chivukula (D-Franklin), the state's first Indian American member of the state legislature. "I think what people understandabout this governor – the seven percent of the New Jersey population that is Asian American – and every other community -is that he cares about each community."

Asked if Corzine's choice of Weinberg – a known anti-establishment figure in the party – couldinflame a civil war between progressivereformersand Frank Hague school traditionalists, Chivukula said, "I don't think soat all. We have a common factor in Obama (who last year received the vote of nine in ten Indian Americans), who has committed to bringing changeto our country, with reforms to ourhealthcare system, for example, which even Richard Nixon talked aboutdoing when he was president.

As for thosenervous poll watchers in the partywho want to ax Corzine from the ticket,Chivukula said, "This talk has been going on this way, going back three or four months now, and what the governor has shown throughout is great tenacity while doing one of the toughest jobs, in the toughest times."

The campaign kept Weinberg on the ground to campaign after Corzine left.

Someone ribbed Chivukula about why it had taken him more than one effort to break the coconut the priest had given him, especiallysince neophyte Weinberg had busted it open with one shot. When he tried to explain – "The last time I did it, I split it so hard that I splattered everyone neaby" -he inevitably prompted a skeptical response, and the assemblyman laughed, resigning himself to people believing what they want to believe. 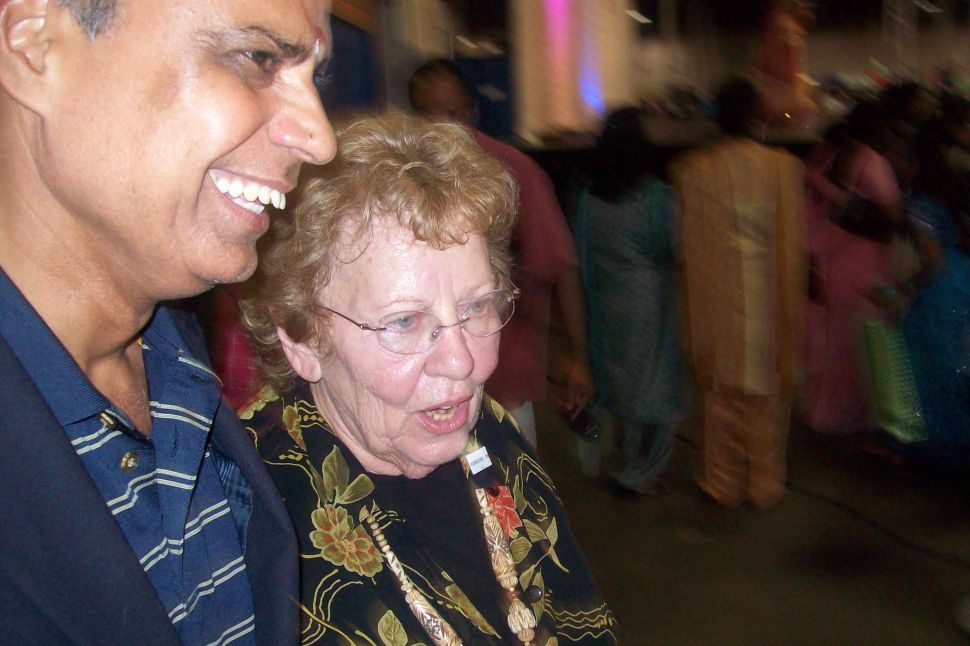