Assemlyman John Wisniewski (D-Sayreville) today called his running mate in the 19th Legislative District, South Amboy Mayor Jack O'Leary, andaskedhim to give serious thought to getting out of the Assembly race.

"Ihave asked Mayor O'Leary to carefully consider the viabilty of his candidacy in light of the current state of affairs in New Jersey," said Wisniewski, moments after calling O'Leary.

The mayorsounded unphased by his running mate's call.

A replacement for indicted Perth Amboy Mayor/Assemblyman Joe Vas, O'Leary immediately ran into questions about his and his brother's insurance work for surrounding municipalities and his brother's establishment of the South Amboy Democratic Club to allegedly solicit contributions from people doing business in South Amboy.

O'Leary has consistently said he has done nothing wrong.

To date, O'Leary and Wisniewski have barely campaigned together – if at all.

"It's fair to say that's more by coincidence than design," said Wisniewski. "I tend to be very aggressive during campaign season. That's my political upbringing, campaigning against Republicans."

Democratic Party sources say that in the event O'Leary abandons his run for the Assembly this year, the party would run Middlesex County Superior Court Judge Mathias Rodriguez.

Wisniewski denied a Middlesex rumor that he promised the Assembly Latino Caucus to help dump O'Leary in order to secure a Latino running mate.

"If I were that clever, I'd be president," said Wisniewski. "The fact of the matter is that it's a prudent exercise to consider what would happen if Mayor O'Leary resigns, and serious consideration must be paid to having adequate minority representation in this district." 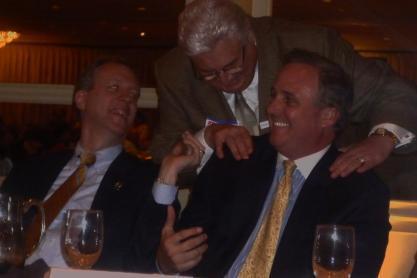