HOBOKEN – Acting Mayor Dawn Zimmer is answering questions now in the council chamber moments after assuming the oath of office.

The city's first woman mayorgets a big hand when a reporter asks her is it's "safe to assume" that come November she will be a candidate for mayor, to fill the unexpired term of Peter Cammarano, who resigned this morning.

"I think it's safe to assume that," Zimmer says.

She adds later, "Nothing ever comes easy in Hoboken. …I'm going to be reaching across the table and getting the supporters of Peter Cammarano to understand we have to work together."

The crowd packs the old City Hall chamber. Even with the TV umbrella lamps open and shining, the lighting is dull yellow in here with the shades drawn.

Green Zimmer campaign shirts speckle the audience, which is heavy with New York Press crews and light on Cammarano supporters, if there are even any here.

A few have to be – they work here. But otherwise their absence underscores a city still divided, still pained.

She received a call from Cammarano this morning.

The feds busted him last week on charges of taking cash bribes for the same campaign in which he beat Zimmer by 161 votes. He toldZimmer he'd hoped to continue to serve as mayor, but can't now. He wished her good luck and she wished him good luck.

"We begin the hard work of restoring the public trust," says the acting mayor, moments after taking the oath from City Clerk Jimmy Farina. "I am confident we can put Hoboken on the right track and restore confidence in our town."

She takes the opportunity of the cameras in the room to plug Hoboken.

"The eyes of the nation have been drawn to our town – we have great restaurants and great cafes," she says. "Weare a short PATH ride from New York. Visit Hoboken, New Jersey, the world's greatest mile-square city."

Someone asks her aboutthe gubernatorial raceand she says she is certain the citizens of Hoboken will look at both candidates and make an informed decision.

Standing next to Zimmer with a walker is her mother-in-law, widow of the man who died in a hit-and-run accident.

His death- and what she saw as the police department's reluctance to purse a serious investigation – propelled Zimmer into Hoboken politicsfour years ago.

She made a donation to reform candidate Carol Marsh's 2005 mayoral campaign and became a pedestrian advocate.

Now she's the acting mayor after two brutal contests and potentially a third on the horizon.

If there is any doubt inher comment about it being "a safe assumption" that she intends to run for the unexpired term in November, she adds definitively to PolitickerNJ.com, "I'm going to run."

Her mother-in-law grips her walker as she leaves the council chambers with the crowd.

"I'm proud of her, she says of Zimmer. "But it's like Hillary Clinton said, for her to succeed as mayor, it's going totake a village." 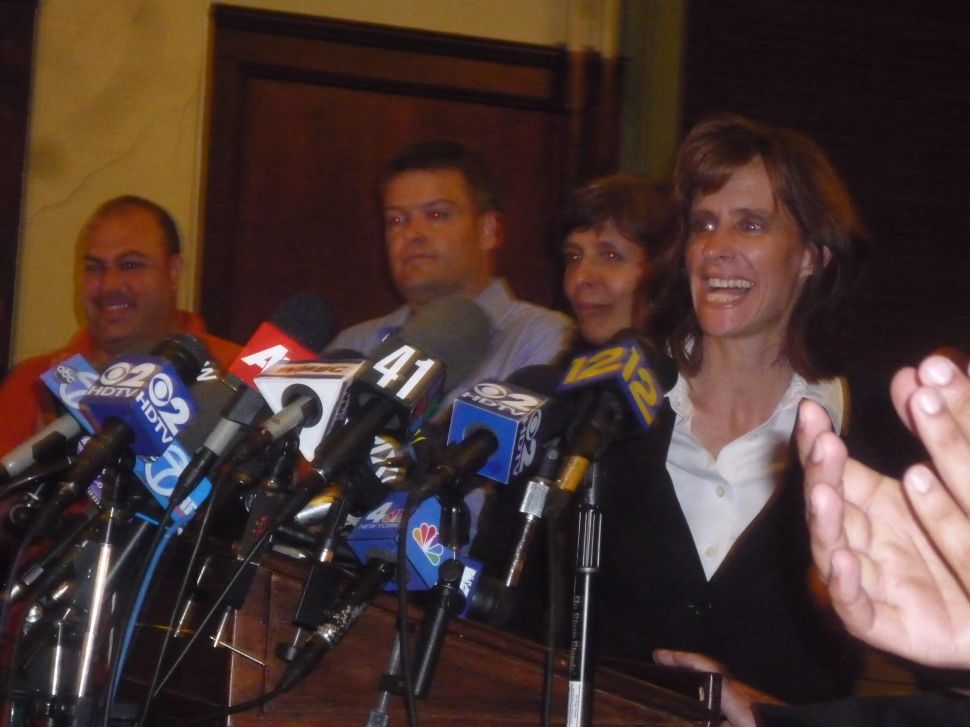