HOBOKEN – Defeated by him in a runoff election on June 9th, Council President Dawn Zimmer today called on Mayor Peter Cammarano to resign.

Zimmer said she believes everyone is innocent until proved guilty, but noted the rough political times the city weathered in recent months.

"Right now my biggest concern is the people of Hoboken," Zimmer said. "It was time to come together.I had accepted that he's mayor andI knew it was going to be a dance. Right now, we're up in the air again, and that's a hard place for Hoboken to be in."

The council president reiterated her disappointment with Cammarano for taking money from developers in his mayoral campaign, and did not appreciate statewide officials intervening to the degree they did in local politics.

"But I never imagined him (Cammarano) taking bribes," said Zimmer, who talked to corporation counsel shortly before speaking with PolitickerNJ.com.

"Right now I'm trying to get the message out to residents that city sevices will continue and our city monitor, Judy Tripodi, will make things run," Zimmer said. "We still have a mayor, and that mayor is Peter Cammarano."

Zimmer and Cammarano rammed heads again as recently as last night, when the new council president tried to pass an ordinance that would concentrate the power to appoint zoning board members with the council. Cammarano threteatened to veto the measure if it made it past the council.

"My feeling is we're much safer having nine people (the council members) appoint members to the zoning board rather than one (the mayor)," Zimmer said.

"I'm disappointing that (old rival Councilwoman) Beth Mason voted against giving the city council authority to appoint the zoning board," Zimmer added. "At this point, we want to take it back to committee in light of the situation. This proves that authority needs to be with the city council. If elected mayor, I will make sue we get that passed. It's the safest way to do that."

Undecided on a gubernatorial candidate, Zimmer told PolitickerNJ.com she is considering both Republican Chris Christie's and Gov. Jon Corzine's candidacies.

She said she was disappointed by the governor's silence as state level operatives overran Hoboken during an election she won on the machines but ultimately lost to Cammarano in a nailbiter that came down to absentee ballots. 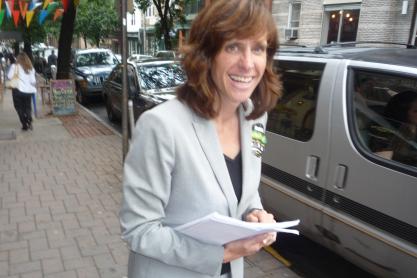