NEWARK – It was aday of celebration in the Central Ward for North Ward stalwart Steve Adubato,who personally cut the ribbon on theRobert Treat Academy-Central on William Street for kindergarteners and first graders.

The way theNorth Warderfigured, if Obama as an African American could secure entire white voter towns, then why should Adubato as a white feel trepidatious about going full bore in areas where black voters dominate; areas like the Central Ward, for example, where the end of theMayor Sharpe James eraleft a political crater that both Adubato and James successor Mayor Cory Booker both eagerly tried to fill.

Newark is composed of five wards, and although a phys ed teacher by trade, James knew math well enough to know that if he controlled three wards, he could maintain control of his domain, and he did: the West, the South and the Central.

His departure from the scene two years ago tilted more South Ward power into the hands of Payne family, and enabled state Sen. Ronald Rice (D-Newark) to consolidate power in the West.

As the longtime leader of the North Ward Democratic Organization and co-founder of five institutions offering education and services to residents inNewark's northernmost,mostly Latino ward, Adubato could see possibility in the Central Ward.

So could Booker, who had lived in Brick Towers and built his Newark Career from the power projection platform of the city's biggest ward where the most development and investment opportunity continues to exist.

Brown died earlier this summer of a heart attack, sending shock waves through both the North and Central wards.

Both Adubato and Booker eulogized him at his funeral last month at Abyssinian Baptist Church, and those in the audience who had witnessed the bruising political battle betweensthe young mayorand the veteran Adubato/Brown tag team straightened to hear the mayor's particularly moving homage.

"I used to see him when he worked for the Housing Authority and he always had a smile," Booker recalled of Brown as he stood in the pulpit of Abyssinian Baptist. "I was a little wary of him because sometimes we're wary of people who smile all the time."

But Booker came to see over the years that Brown's smile came from strength and joy and even though they took up positions on opposing sides of the Central Ward war, the mayorfound inBrown a model and an elder.

So Brown wasn't present today butalong with the expansion of Adubato power in the Central Ward which Brown personally oversaw, came the accompanying and serendipitous expansion ofAdubato's charter school project, which formally came to fruition today.

While the political battles broiled, Adubato was talking to his old friend, Father Edwin Leahy, the headmaster of St. Benedict's Prep, whose Newark Abbey in the Central Ward on Wiliam Street had some available space – perfect for Adubato's long brewing but stymied idea of a Central Ward school to serve a mostly African American population.

"It wasn't politics, it was divine intervention,"saidNorth Ward spokesman Bruno Tedeschi of the new school, whichwill add a grade each year until the 2016-17 academic year, when it will be home to 225 students.

"I can't think of a priority more important than preparing our kids for the future," said Adubato. "We have long dreamed of expanding our successful model in Newark. This is an opportunity to show, once again, that disadvantaged children in the inner city can succeed.

"In urban America, we talk about murders," addedthe school founder and politicianin the packed auditorium of the new school, moments before he cut the ceremonial ribbon with Gov. Jon Corzine and Booker looking on from the front row. "I believe if we don't prepare our children for the future, that is bloodless murder."

Today, with Gov. Jon Corzine and Booker side by side in the front row of an auditorium packed with children, Leahy, political types, and politicians, including Bell, Adubato appeared delighted as he officially opened the school after bearhugging longtime benefactor Corzine.

"Education has been and continues to be my top priority, as a world-class education is key to our economic future – our children's future – and for a better quality of life for all of us," said the governor. "The accomplishments of Robert Treat Academy, in just 12 short years, have been astounding. That is why the opening of Robert Treat Academy Central is such an exciting time for the children of the region."

Booker, for his part, all but endorsed Bell for reelection to the Central Ward council seat next year.

Brown was Bell's chief of staff.

"Did any of you see 'Meet the Press" this past Sunday?" Adubato wanted to know. "Did you see our mayor? For years I had to gulp when I said I was from Newark. Look what Cory Booker has brought to us – a feeling of pride we never knew, and we are so proud of him."

And they plan to dedicate the library at the new school to Brown, the late Democratic chairman of the Central Ward. 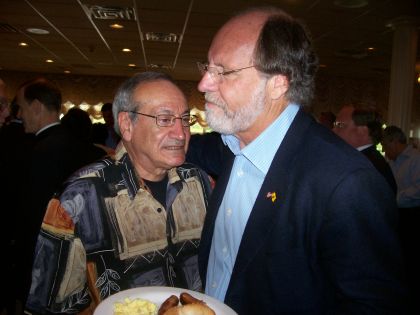