RED BANK – After weathering a roomful of angry residents tonight who called him everything from "liar" to "socialist" to Speaker Nancy Pelosi "lackey" to illegal alien enabler, U.S. Rep. Frank Pallone (D-Long Branch) said he failed to hear an argument to change his mind about the need for a public healthcare option.

'No, I have to be honest, so much of it is misconceptions," Pallone told reportersas 250 residents who attended the first round of this town hall meeting filed out of the Red Bank Middle School auditorium to make way for another 250.

The congressman, who chaired the committee and helped craft the healthcare reform bill which made it through committee on the House side but which the Senate still has not considered, was ready for a thirdbatch of residents at 10 p.m.

Hundreds more lined up outside the school wouldn't make the cut.

"This program is designed not to impact employer-provided healthcare – most people get healthcare through their employer," said Pallone. "It's desiged to address the problems of those who don't have insurance. …I'm very proud of the bill."

Although there was a small contingent of people shaking "O" signs and at least one crowd member at the mic who told Pallone the public option was already a major come-down from single-payer, the bulk of the crowd here in this county that backed Sen. John McCain over Barack Obama in last year's presidential contest wasn't convinced.

If President Obama's summertime starpower effort at the PNC Arts Center was as much a sales pitch for healthcare reform as an attempt to buttress a governor then enduring the turbulence of a tough reelection bid, few here were ready to show Obama- let alone Corzine orPallone, named honorary co-chair ofthe Corzine campaign just yesterday- any love.

"Obamacare may kill my daughter" read the sign of one man, who walked out in disgust amid catcalls, groansand shouts cast in the direction of Pallone, who inititally had tried the more casual carpet-level interaction with the crowd only to get jeered up onstage.

"He's doing an Obama," a woman muttered to her husband, jerking a thumb at Pallone. "He says he'll answer questions, and then he talks for five hours."

The worry among residents here tonightcame on the heels of Pallone's "aye" votes on thebanks bailout and federal stimulus, and his"aye" vote on cap and trade. Theydoubt the federal government's ability to deliver a public healthcare option that won't significantly increase taxes and short-circuit the private sector's capacity toprovide healthcare.

"The problem is everyday more and more people are losing insurance," Pallone countered. "Today, 61% of people receive their insurance through their employers. If we don't do something, those numbers will continue to grow."

Pallone was repeatedly drowned out by audience members who were already fed up when they walked through the doors of the auditorium.

"The cost of government…" the congressman tried at one point.

"If a person loses his job…" Pallone said at another point.

"Then get a second job!" a man huffed amid guffaws.

"Send them back to Mexico," a voice screamed over the top of the verbal fray with Pallone stymied at the microphone.

Of course, the congressman and his critics disagreed over the popularity of the public option. Pallone says he believes most of his constituents favor the reform. His challengers here tonight say no way.

Done with the first group, Pallone readied for the second bunch, who coming gamely though the double doors, promptly shouted out a "USA! USA! USA!" chant before launching into an impromptu version of "America the Beautiful."

There was a brief lull.

When Pallone urged people to stand for the Pledge of Allegiance, at least one man jolted to his feet in anger and fumed, "Hypocrite" atthe congressmanbefore screaming "under God" at the top of his voice with at least two dozen others in a show of defiance.

"In God we trust," the same man shouted at the end, pointing an angry finger at Pallone. "In you, we don't," beforekick-starting a "Yes, we can't" rant. 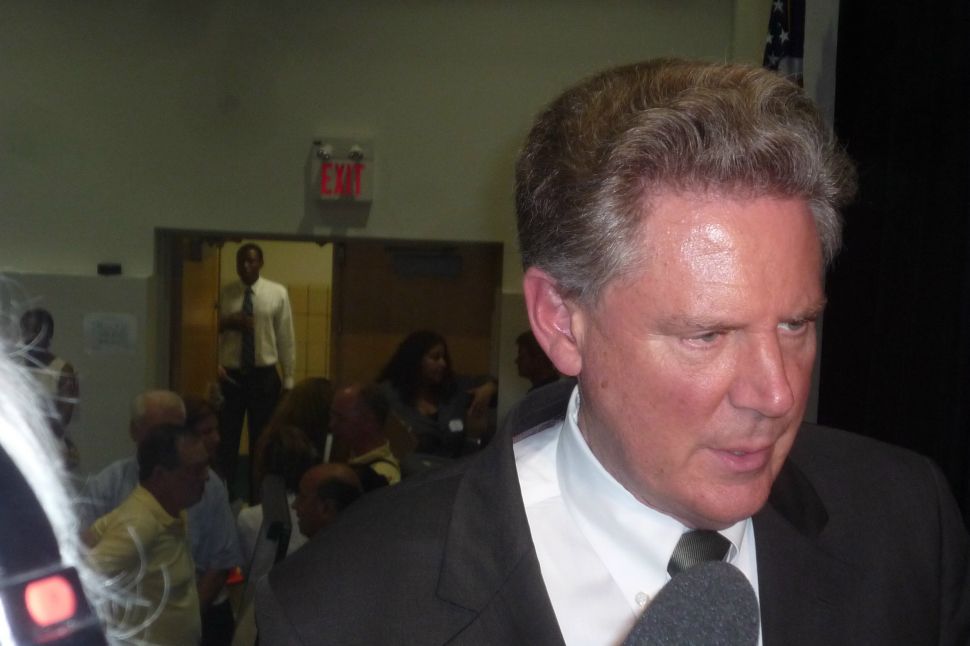