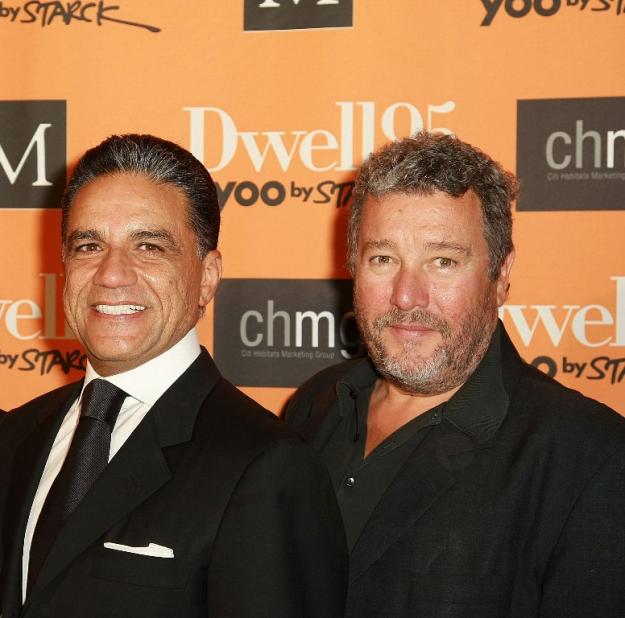 Joe Moinian was once said to have a Midas touch with new developments. That golden touch may be fading.

A few years ago, Mr. Moinian went on a buying spree with plans to redevelop the likes of 1775 Broadway, 95 Wall Street and 475 Fifth Avenue. (Mr. Moinian is pictured above, left, with designer Philippe Starck at the launch party for the redeveloped 95 Wall, now a high-end rental. The party was held, ominously enough, on Sept. 15, 2008, the date of Lehman's bankruptcy.) But a number of his properties—mostly in the Financial District, but with a couple in midtown—have run into financial trouble. He has defaulted on loans and has informed lenders that he’s expecting to default on more. Mr. Moinian had to return the keys to 475 Fifth Avenue.

Now the question is whether he can retreat from costlier ventures but maintain his empire’s core. —Bonnie Kavoussi 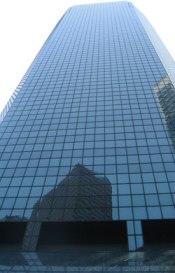 Joe Moinian bought the commercial building at 180 Maiden Lane in August 2004 for $355 million—a price many in the industry viewed as too high even then. Now, Mr. Moinian has recently informed Wachovia that he is expecting to default on a $292 million loan for 180 Maiden due in November. At least the vacancy rate is not likely to pose an issue, thanks to AIG’s bailout: AIG is planning to move its employees from 70 Pine and 72 Wall, which Young Woo is in contract to buy, into 175 Water Street and 180 Maiden Lane. 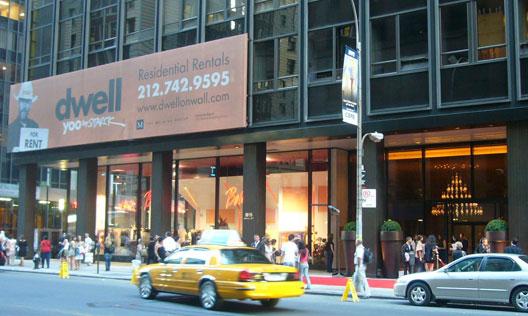 Mr. Moinian bought 95 Wall Street in May 2004 with plans to convert it from an office building into a luxury rental residential building. The building’s marketing agent now says it is almost fully leased—and tenants reportedly include Gossip Girl’s Chace Crawford. Unfortunately, Dwell95 launched on the same day Lehman Brothers collapsed and Wall Street witnessed its largest one-day stock drop since 2001. Mr. Moinian has recently missed a $230 million loan payment on the property to KeyBank. 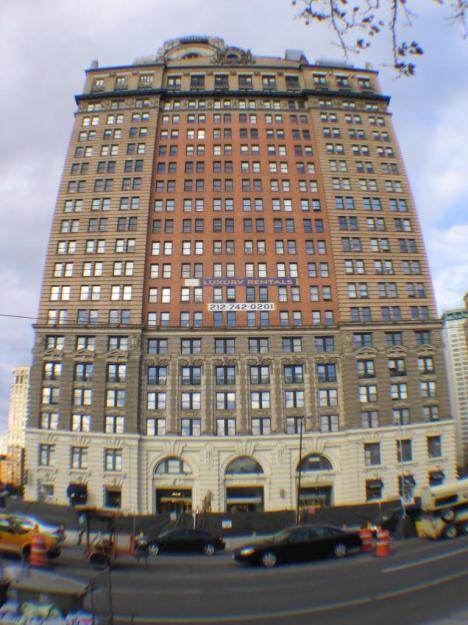 The Moinian Group bought 17 Battery Place North—a 22-story office building near the southern tip of Manhattan—from SL Green in January 2006 for $70 million. The good news: there are a number of eager tenants who recently signed new leases, including Community Access and Tethys Technology. The bad news: Mr. Moinan has had to inform lenders that he is expecting to default on a $53 million loan for the property, due in November. 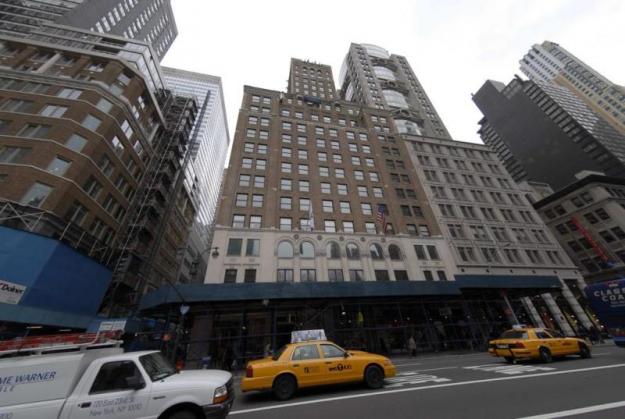 In April 2007, Mr. Moinian and Westbrook Partners bought the midtown office building at 475 Fifth Avenue for $160 million—almost entirely financed with floating interest-rate loans from Barclays—with grand plans to refurbish it and attract higher-paying tenants. But after defaulting on those loans and finding it difficult to lure the wealthier tenants he desired, Mr. Moinian had to return the keys to Barclays in May. Now Barclays is quietly marketing the 23-story office building, situated right across the street from Bryant Park and the New York Public Library. 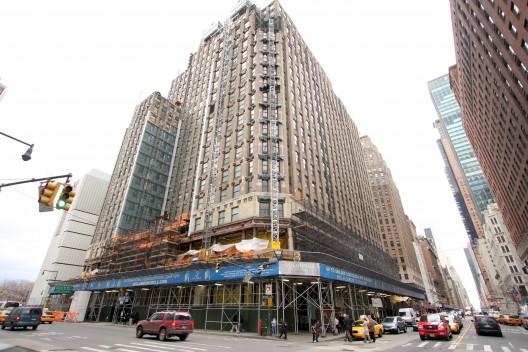 Mr. Moinian has been the target of harsh criticism for remaking the old Newsweek building—an elegant 82-year-old edifice overlooking Central Park—into an all-glass office building to attract new tenants. Mr. Moinian isn’t just tearing down the façade and replacing it with glass; he’s installing white marble floors and has even changed the address to 3 Columbus Circle. Newsweek left behind its 203,000 square feet in the building in May, and The Washington Post and Comedy Central have also been forced to move. The $65 million renovation is moving slowly, but onward it moves. “The loan for 3 Columbus Circle is and will remain in good standing,” a spokesperson told Bloomberg News in June. 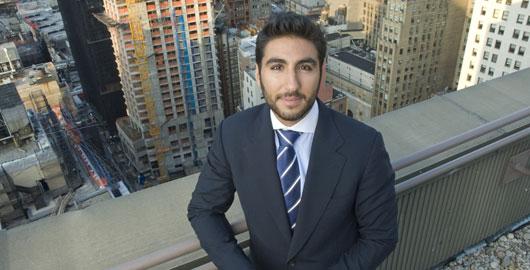 At first, it looked like a bargain: Joseph Moinian bought the smaller Deutsche Bank building for $30 million in 2005, with plans to replace it with a 57-story hotel and condo. But construction, which is being headed by Joe’s son Matthew Moinian (pictured last September, with the W going up in the background), has relied on over $300 million in loans: $39 million from KeyBank and $290.6 million from PB Capital. The hotel’s Web site touts its opening date as Dec. 1—but even if it opens on time, the W is likely to face trouble as room rates for New York hotels continue to drop. 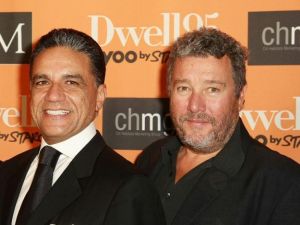 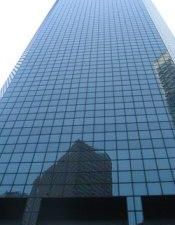 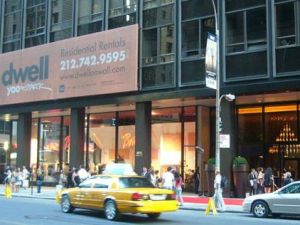 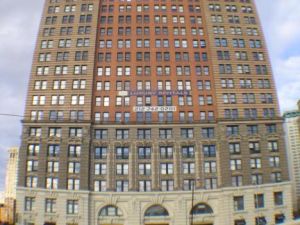 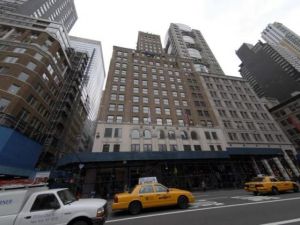 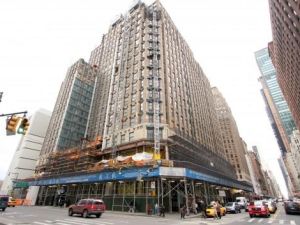 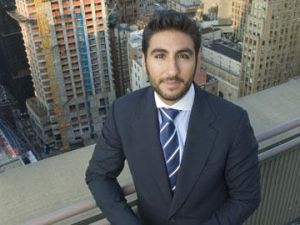