A first in New Jersey political history: the announcement that Assemblyman Anthony Chiappone (D-Bayonne) has been indicted on state corruption charges will be the first time two sitting Assemblymen from the same district will be charged with crimes at the same time. Assemblyman L. Harvey Smith (D-Jersey City) was arrested in July. Chiappone and Smith were running mates in the Hudson County-based 31st district in 2007.

Smith has refused calls by state Democratic leaders to resign, and Assembly Speaker Joseph Roberts has suspended his pay and stripped him of his committee assignments. Smith was not a candidate for re-election at the time of his arrest; he gave up his seat to run unsuccessfully for Mayor of Jersey City last May. His term in the Assembly expires in January. Last spring, Democrats picked Charles Mainor, a Jersey City police detective, to run for his seat.

But Chiappone is the Democratic nominee for Assembly, running on Gov. Jon Corzine's ticket, and faces no legal obstacle to remaining in the race. Republicans have never won the 31st district since its creation in 1973, and the last time a Republican represented this part of Jersey City or Bayonne in the Legislature was in 1921.

Last month, as the U.S. Attorney was filing a criminal complaint against Smith, FBI agents executed a search warrant at the home and office of Chiappone's political rival, Joseph Doria. Within hours, Doria, a former Assembly Speaker, State Senator and Bayonne Mayor, resigned his post as state Community Affairs Commissioner. 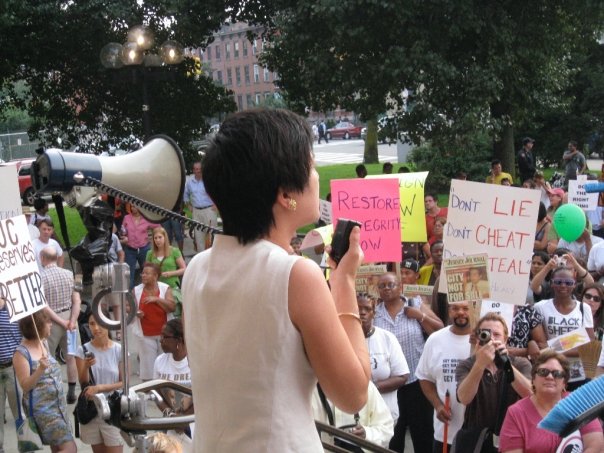