Carla Katz’s name has surfaced in the gubernatorial contest, but it’s not coming from Republican gubernatorial nominee Chris Christie.

Even in light of potentially damaging news accounts about Christie’s loan to high ranking U.S. Attorney staffer Michele Brown, his campaign has no plans to hit back by raising Governor Corzine’s relationship with the former leader of the state’s largest public workers’ union, who he dated before becoming governor. .

“Chris has made a real effort to run a different kind of campaign and has from the very beginning stipulated that this will be a campaign about the issues,” said Christie advisor Maria Comella. “In a state that is facing the highest unemployment in 32 years the highest tax burden and a 32% up-tick in home foreclosures, these are the issues that voters are going to go into the booth to make a decision on in November, and they’re exactly what Chris is going to be talking about.”

In a February, Christie told The Record’s Chares Stile “you won't hear anything about Carla Katz and e-mails out of me and or out of my campaign.”

The news that Christie loaned $46,000 to Brown, his friend and former subordinate at the U.S. Attorney’s office, brought about heavy criticism from the Corzine campaign, as did Christie’s failure to disclose it on personal financial reports and his income taxes. But Christie has not raised Corzine’s own loan of $470,000 to Katz when he was a U.S. senator, which he initially failed to report and forgave in 2004. Nor has Christie responded to the Corzine camp’s charge that the U.S. Attorney’s Office is slowing down their Freedom of Information Act (FOIA) requests regarding Christie’s tenure there by pointing to his refusal to publicly release his email exchange with Katz during contract negotiations in 2006 and 2007 – which former Republican State Chairman Tom Wilson crusaded for.

Christie may not have to bring up Katz, however. Corzine’s loan to her is mentioned in most news articles about Christie’s loan, and some editorialists and bloggers have come to the Republican’s defense by bringing her up. And since the U.S. Attorney's Office began a probe of Katz's use of union funds last year, when it was still under Christie's leadership, using her as a campaign issue could give Democrats more ammunition in accusing him of politicizing his role there.

Even prominent Republicans who support Christie but don’t have an official role in the campaign demure from talking about Katz, or saying whether the campaign should.

“I’m not in the room. I’m not part of the political staff. Whatever issues become relevant for the campaign is for them to decide, and that’s not a prerogative for me,” said state Sen. Kevin O’Toole (R-Cedar Grove).

Democrats are quick to point out that there are key differences between the loans. Katz was not subordinate to Corzine (although they did negotiate labor contracts after he became governor, which was after he forgave the loan) and he, unlike Christie, did not charge interest. They also say that Republicans are trying to have it both ways by staying above the fray on the record and pushing Katz’s name on background.

If Republicans wanted to bring up Katz without Christie breaking his pledge, outside groups could raise her name. But a spokesman for the Republican Governors Association, which has spent about $3 million in-state, implied that his organization would not.

“Our job is to make sure New Jerseyans know and remember Corzine's record as governor on the issues that matter. Right now those issues are taxes and jobs, but Corzine knows he can't defend his record on these issues so he's doing everything he can to distract and mislead the voters,” said RGA spokesman Mike Schrimpf.

Republican State Committee Chairman Jay Webber, who took over the post from Wilson in May, said he would not bring Katz up either.

An unstated reason Republicans aren’t seizing on the governor’s past relationship and loan with the union leader may be because voters don’t really know or care about her, according to Fairleigh Dickinson University pollster and political science professor Peter Woolley.

“It makes for good copy when you’re talking about the romantic aspect of it, but it quickly becomes to most voters tedious and overcomplicated when you get into the legal issues surrounding email and the financial arrangements,” said Woolley.

An FDU poll from September, 2007 found that 61% of likely voters had not heard of Katz, and that she did not appear to be hurting the governor’s support at the time (back then, 54% of voters approved of Corzine’s job performance and only 25% who disapproved).

By January, 2009, however, after the email issue played out more in the courts and the press, a Monmouth Univeristy poll found that 67% of voters had heard of the email drama and 61% said Corzine should release the email. At the time, Monmouth University pollster Patrick Murray wrote that it "could become a campaign issue" because 31% of respondents said that Corzine's refusal to release the correspondence would make them less likely to vote for him.

But the Katz emails have become "old news," said Woolley, while Christie's loan provides a fresh opportunity to tarnish the leading candidate's image.

“The Corzine campaign is following the playbook and attacking the challenger at his perceived strength, they are going to leverage this to find out what it’s worth," he said. 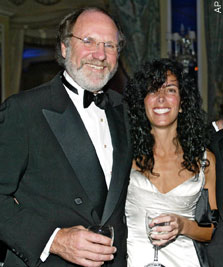