Although Wayne's solid GOP, this is a Democratic base country county, and for Corzine to have to worry about a split-screen effect with ChristiehadDemocratic Party operatives quietly fuming up and down the wings of the auditorium here at the Passaic County Technical Institute.

Both parties credit Passaic County Democratic Party Chairman John Currie -who sat next to the governor during the ceremony as the counterpoint to Christie, who settled into a chair beside Senate Judiciary Chairman Paul Sarlo (D-Wood-Ridge)-with kick-starting the Valdes as prosecutor concept on marching order's from the Governor's Office to find a Latino(a) candidate for the vacancy.

The good news for Democrats in this county where Latino registered voters form well over a fifth of the voting populationand whereregistered D's outnumber R's 78,009 to 47,498? Currietracked down a hard-nosed white collar crime and financial fraudprosecutor with courtroom experience who was also Dominican American. They checked out the resume and to a man/woman the conclusion was competence. And then there was the history-making factor.Valdes would be the first Dominican-American lead prosecutor in the country,creating an opportunity for Corzine to oversee a Sotomayor scenario two months before Election Day in a state with a big and growing Latino voting bloc.

The bad news? Valdes was hired by Christie when he ran the U.S. Attorney's Office and worked under him as assistant United States Attorney, and insisted on giving him a speaking role here this evening.

"It's a great day for the administration of justice in the State of New Jersey," said Christie, words not dissimilar from Corzine's, but this time setting some teeth on edge upon delivery as party diehards grudgingly let Christie absorb some of the glory.

The chairman played down the Corzine-Christie rivalry in the context of Valdes.

"She worked for Christie for seven years and the governor made this happen, that's why they're both here," said Currie. "Christie wants to give her kudos and the governor picked a qualified person. I think she's great."

Down at the near end on the same side of the stage as Christie sat U.S. Rep. Bill Pascrell (D-Paterson), a stark profile shot with Christie in the background, whichhighlightedthe congressman'scall earlier in the week for the feds to investigate Christie based on allegations of the former U.S. Attorney politicizing that office.

It was Valdes who wanted Christie there, and more than several Democrats privately chastised her for allowing the GOP gubernatorial candidate to assume a chair onstage.

"There are a lot of disappointed Democrats here today – this shouldn't be about politics," said a high ranking Democrat. "It's become political and it shouldn't be political."

Pam Miller, past president of the Garden State Bar Association, supplied what came closest to a public dissing of Christie when she described "a day of perfect confluence," setting up in the minds of political animals the resolution of Christie-Corzine through the person of Valdes. But, in fact, Miller's "perfect confluence" was "the governor's vision and courage and highest standards" with an "exceptional lawyer" in Valdes.

Corzine also treaded near the edge of leaving Christie out of his public remarks, as he ticked off the names of "all those who share that vision of equal justice under the law" against the backdrop of U.S. Sen. Robert Menendez (D-Hoboken) public questioning Christie's dedication to those principles, and at least twice left out the former U.S. Attorney turned gubernatorial candidate who's wrestling with headlines about how he conducted business at the U.S. Attorney's Office, before finally mentioning Christie by name in the same spirit.

But the governor saved the celebratory words for the new prosecutor.

"We are proud, we are proud of you," Corzinetold Valdes. "Our diversity makes us strong. It's from that perspective that I was proud to nominate her to the position of prosecutor."

Speaking between Girgenti and Sarlo, O'Toole paid tribute to the new prosecutor as a force in her own right.

"This is not about Gov. Corzine or Chris Christie, this is about the county an the prosecutor," said the senator. "Kids, you want role models? Look to that prosecutor."

Before giving a plug to his own efforts at the U.S. Attorney's Office to hire minorities, Christie in his remarks gave a plug to Corzine.

"I want to commend Gov. Corzine for making the wise choice," he said. "I am confident that choice was not easy."

Turning from the podium, the former U.S. Attorney hugged Valdes, as Corzine had, then shook hands brisklywith the governor beforeheading back to his seat.

Notwithstanding the territorial incursion they felt they suffered with Christie in the house, Democrats were mostly heartened bythe former U.S. Attorney'sKarl Rove headlines and feel encouraged by the trajectory of the gubernatorial race.

"We have sevencampaign workerswho have been canvassinginan operation that we got up and running early and we are confident that we will be able toget the vote out for the governor," said Currie. 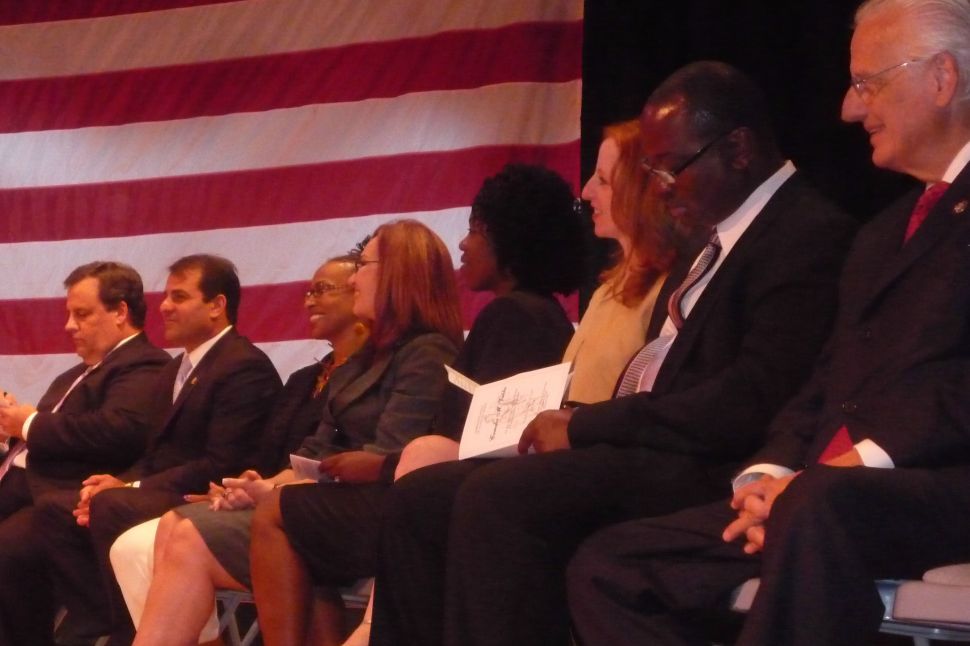