SOMERVILLE – When President Barack Obama choppered into Holmdel and stood at a podium with Gov. Jon Corzineas flashbulbs popped, the event went down asa high profile rescue effortby the president ofa governor for whom much of the Democratic Party was hitting the panic button.

Today, in a seeming effort to shake off the candidate in distress designation and himself come to the oratorical aid of a president whose own favorables havedipped since his appearance at the PNC Arts Center earlier this summer where he sold healthcare reform as much or more then his ally Corzine,the governorsounded a note of defiant allegiance toObama.

"Our president is under attack," Corzine told a crowd of 75-100 rain-spattered troops at the opening of the Somerset County Democratic Party headquarters on Division Street. "We need to send him a signal that we're with him. We're not going backwards, we're going forward."

While the governor is running nine points behind GOP gubernatorial candidate Chris Christie, according to the latest Quinnipiac University poll,the Christie campaign had a week anda half of negative headlines, which may have tightened the race.

But as Christie sustains a barrage, so too does Obama – widely viewed as Corzine's most significant meal ticket to reelection.

According to a national Washington Post-ABC News poll released today, just 49% of respondents expressed confidence that the president- strugglingwith party allies who are trying tohold onto a public optionas part of national healthcare reform- "will make the right decisions for the country, down from 60 percent at his 100-day mark."

Of course, the signal Corzine wants to send to quash any rising backlash against the president is his own blue state reelection on Nov. 3rd.

While most of his efforts to this point have kept him concentrated in party strongholds Essex, Hudson, Middlesex and Bergen,where "recent polls show weaker than expected support among African American and Hispanic voters," GOP State Party Chairman Jay Webber happily noted this week, the governor'sappearance tonight in traditionallysuburban Republican Somerset showcased a county that in 2008 surprisingly went for Obama over GOP nomineeJohn McCain by 6.1%.

Republicans here hung on to the Freeholder Board, however, and helped U.S. Rep. Leonard Lance (R-Clinton) handily defeat Linda Stender in their 7th Congressional District tilt, and now with Corzine and not the 2008 "Change" message Obama at the top of the ticket, the GOP figures the county will congeal back to its natural Republican shape.Yes, there are49,230Democrats to48,321 Republicans in Somerset, but the county's 79,933 independent voters still lean Republican, and most Democrats privately concede that last year was their best shot to at least grab one seat onthe freeholder board.

Cringing through much of the summer, as is most every Somerset Democratic Party loyalist with the prospect of big Republican and unaffiliatedturnout at the top of the ticket for the front-running Christie,both freeholder candidates this week were heartened by headlines that appeared to damage Christie's Elliot Ness-like crime-fighting cred.

"That's why we've been running hard and will continue to run hard – you never know what dynamics can change the course of a race," said Birge.

Short of that and despite his pump-up-the-crowd speech in the rain – "13,000 private sector jobs were added last month because of our business-friendly policies," Corzine yelled. "We're setting the pace!"- there was little confidence in the crowd for the singular merits of Corzine, and even grumblings about giving Christie a look-see – just to shake things up in a Democratic Party-controlled Trenton that to date has yielded little for Somerset County Democrats beyond Franklin Twp.

Somerset County Democratic Party Chair Peg Schaffer shot down the notion that her organizationwould budge from backing the governor.

"We're supporting Jon Corzine," she said, introducing him in the entranceway to the party's new Division Street HQ as "the greatest governor in the land."

Whatever private conversations were going on about Corzine's chances, a chant started: "Corzine! Corzine! Corzine!" and that's when the governor proceeded to defend the president, who's in his own dogfight on healthcare. 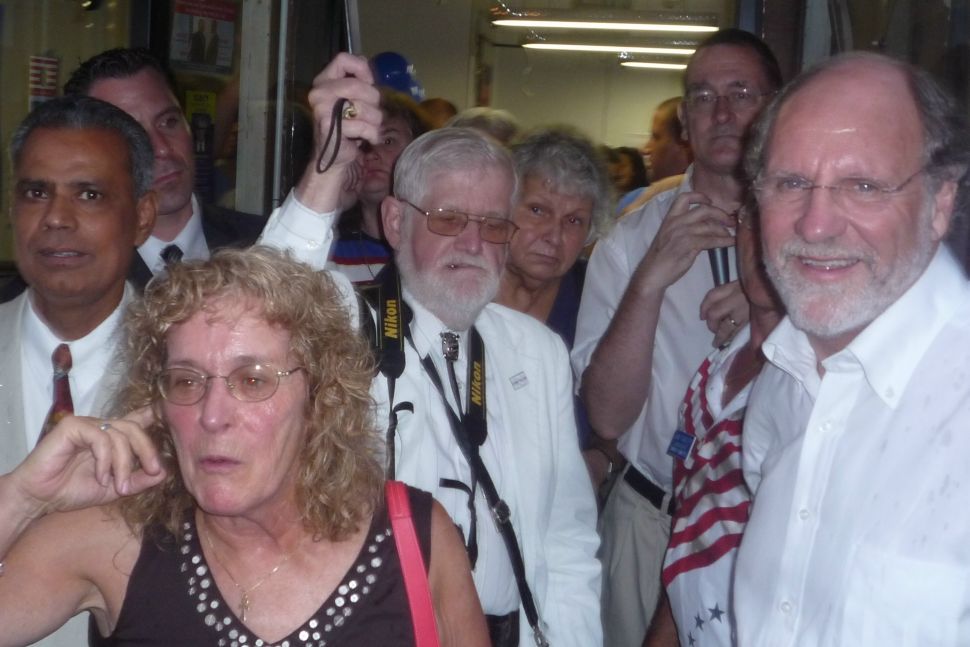