IRVINGTON – Gov. Jon Corzine's informal endorsementtonight of Mayor Wayne Smithwhen the two walked on Springfield Avenue cameshortly afterSmith heartily endorsed the incumbent governor on the steps of City Hall as someone who understands the plight of this Essex County town of perennial hard knocks.

The knock on Smith usually comes in the form of a whisper.

"We've been together from the beginning," the governor said of the mayor,who for almost two years has heard the murmurs when he walks past – "Keith Reid named him in court asIrvington Official #1," andinevitably fieldedreporters' repeated phone calls asking him if heplans to resign.

If not today, what about tomorrow?

"What you learn in this business is a public official can be accused of anything," Smith told PolitickerNJ.com. "You live with these things and you live through them. I haven't heard anything from the U.S. Attorney's Office, but more importantly, I didn't do anything wrong."

He hit another storefront with Corzine in ashoe leatherbuzz-through of jewelry shops, electronics and shoe stores,rug and thrift, grocers, boutiques andbus stops; and accompanied Corzine on at least one jump aboard a bus that abruptly stopped when the driver jabbed a finger of recognition at the governor.

"They've been here 28 years, Gov. Corzine," Smith said of twin brother jewelers Leon and Mike Talis, who the mayor then addressed directly. "You're doing well, right? Trust me, you wouldn't survive if you didn't make some dollars. You're not in it for charity."

A charismatic retail politician, Smith has nonetheless radiated toxicity ever since Reid, the former chief of staff of Newark City Council President Mildred Crump, in his Operation Broken Boards triallast Novemberimplicatedthe mayoras the public officialfor whomReid said he accepted a $5,000 bribe, in addition to the $5,000 he accepted for himself.

At some of his appearances on stages in the lead-up to Obama's 2008 victory,Smith appeared downrightmorose in the midst of otherwise "We Shall Overcome"-like political energy with the Reid backdrop emanating all the worst ugliness from Operation Borken Boards, a public corruption case initiated by then-U.S. Attorney Chris Christie.

Reid's testimony blew the back-chatter into headlines, ultimatelysimply prolonging the gossip about the mayor's status.

"As long as it's out there, everyone's waiting for the other shoe to drop," acknowledged Essex County Freeholder/Councilman D. Bilal Beasely, whowalked point today up Springfield ina Panama hat, steering voters back to the governor and the mayor to make animatedeyeball-to-eyeball contactless than three monthsin front of Corzine's Nov. 3rd showdown with now GOP candidateChristie.

Denouncing Reid's testimony as bogus, Smith walked with Corzine every step of the way, and there was some old Smith groove going on asAssemblyman Ralph Caputo (D-Belleville) admitted the mayor had somethrowback early SharpeJames attitude.

"We can't have a governor who has no sensitivity to our neighborhoods,"Smith told a large crowd assembled outside City Hall by Team Irvington, the local Democratic Party machinemostly runby Beasley.

The crowd erupted with applause.

"Is there somebody down in Washington who screwed up the economy? George Bush," said the governor, who also zinged Christie over the Republican's primary comments about refusing federal stimulus money where there were "strings attached."

"We've been able to use a billion and a half for schools, which we would have had to close or raise property taxes to pay for," said Corzine, quickly turning the claps into hoots of derision as he added, "Christie wanted to turn down the stimulus money."

Smith jeered good-naturedly with the crowd.

Nearing the end of his second term, over half of which has been cloudedover by the Reid debacle,the mayorsaid he definitely intends to run for a third term next year.

"Corzine could support whoever he wants for mayor," said Lyons in a telephone interview. "At this point, it may not be a great endorsement, considering he's down double digits in the polls, but it's early. If he wants to endorse Smith, he has that right. Corzine and Smith have some issues, but I'm going to vote for Corzine because I'm a Democrat. I don't vote for Republicans. But crime down? Yeah, it's down. But come on. There are two fewer murders than this time last year. That's nothing to brag about."

Lyons won't say, but it's almost a given on the streets that he intends to run for mayor again.

"Lyons barely won in his own ward last year," Beasely said as he gripped the shoulders of yet another voter whom he placed in Corzine's path. "He won his ward race by 25 votes."

"This is a rich country, but we don't spread it out enough," the governor told another voter, an elderly man at a bus stop.

"You've got to make it happen – for Barack," Corzine told someone else.

Smith led the way up the driveway to the firehouse withthe state's chief executiveon his heels and a crowd that started out big butwhich the late afternoon sun cut down to platoon-size by the time Beasley, Corzine and Smith and their most faithful lieutenants marched four blocks up Springfield.

The firefighters were midway into their handshakes with the governor when the fire alarm went off and Engine 43 and Ladder 41 were pouring through the doors with full lights and sirens, scattering the politicos.

He was alreadysetting a quick pace for the governor- and smiling with each step. 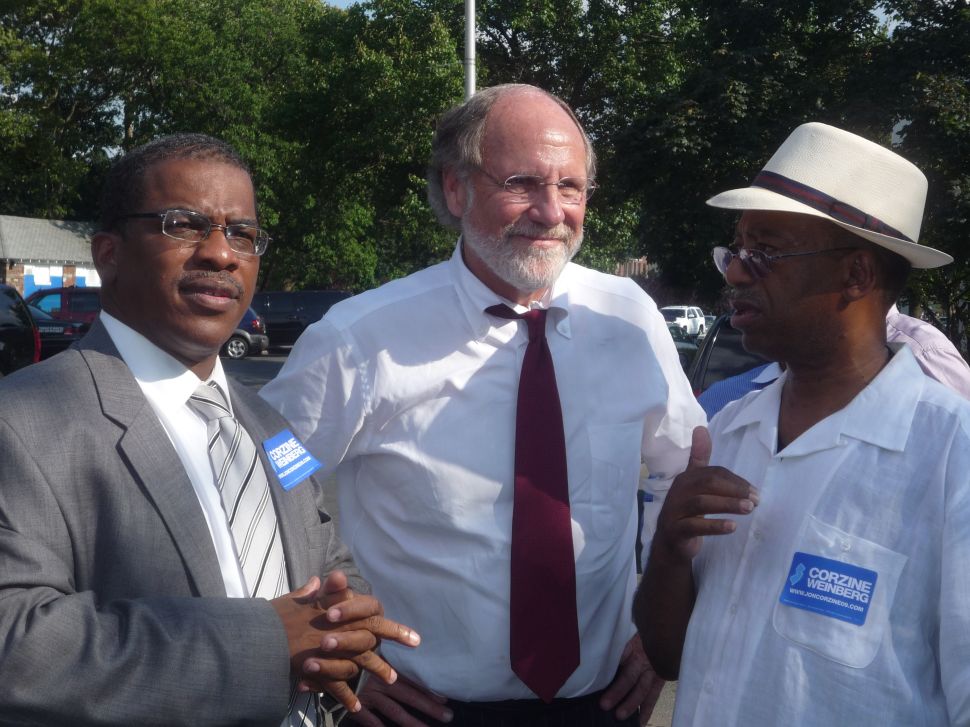