EAST ORANGE – AsNew Jersey's media and political classesfocus on corruption and former U.S. Attorney Chris Christie stands astride the backwash of arrests from nearly two weeks ago sellinga message of change as the Republican candidate for governor, Gov. Jon Corzine redirected the public spotlight to violent crime and murders withnumbers from the state Attorney General's Office that show a reduction in both.

“Thanks to the efforts of Attorney General (Anne) Milgram and the New Jersey law enforcement community, county task forces, police departments, and partner agencies, more than 4,200 offenders have been arrested for crimes including murder, assault with a firearm, armed robbery, and gun and drug trafficking," added the Democratic Party incumbent."We know more work remains. Even one act of violence against a New Jersey citizen is one too many.”

Pitching the stats as a directconsequenceof work done by the AG Office'sgangs, drugs and guns task force, Corzine'sappearance with Milgram ensconced by local law enforcement in dress blues and gold leaf comes as a gauntlet dropright on Christie'sbiographical doorstep.

The former U.S. Attorney often in his statewide speakingtravels last year and the year before talked about his office's prosecutions of the Double Eye Set of the Bloods in East Orange. Notwithstanding their underlying message that all levels of law enforcement are cooperating and have been cooperating stretching back to the Christie era, Bowser said Christie was a minimal player in cracking down on the dreaded gang that once ran these streets.

"Cordero was the lead, Christie was on the outskirts," said Bowser. "Without Cordero's individual assessment of gangs here in East Orange, Chris Christie wouldn't have had any prosecutions. Cordero came out of New York, a gang czar for all the five boroughs. We hired him. He was here four years before Gov. Corzine called us and appointed him statewide. Cordero was the street level guy here."

The governor's officereported "158 homicides in New Jersey in the first six months of 2009, compared to 209during the same time period in 2008 – a 24% drop. Uniform Crime Report figures show that murders declined statewide in 2008, marking the first time since 1999 that New Jersey has seen a drop in murders for two consecutive years. Murders dropped 11 percent in 2007 to 381, the lowest number since 2002. They dropped to 376 in 2008. The broader category of violent crime also declined in each of the past two years. It declined 7 percent in 2007, and declined another .7 percent in 2008."

Democratic sources simultaneously dribbled out statistics showing that the Republican Governor's Association this year accepted $90,000 from the National Rifle Association(NRA), dollars that could in turn find their way into a Christie for Governor TV ad. It's part of an effort byTeam Corzine, down by as many as 14% to Christie, according to the latest Monmouth University/Gannett poll, to make sure that Christiedoesn't wriggleaway from hisprimary time declaration in a dogfight with movement conservative Steve Lonegan that he is himself a conservative Republican.

Today, after seven years of Christie press conferences heavy onnarrativesinvolving elected officials and envelopes with cash inside, the Corzine campaign test drove their candidate's photo opticsas a crimefighter in his own right.

“The latest statistics demonstrate real progress in our fight against gangs and violent crime in New Jersey,” said Milgram. “We have taken a very direct approach under Governor Corzine’s anti-crime plan, conducting intelligence-led, high-impact investigations targeting the command structures and the most violent members of the toughest street gangs. By removing hundreds of violent gangsters from our streets, we have made our communities safer.”

Evidently as a sign of the work he's done, Cordero was given a wide speaking berth.

Faces behind the podium had earlier melted into impressionistic smudges under heavy sheets of perspiration as the former police director here turned statewide law enforcement coordinator plugged the program with a suspended exclamation point.

"We're encouraged by the unprecedented drop in violent crime," he said in his wrap-up. "Much work remains, but we're in this fight to win."

Another favorite Christie contact, whose namehe regularly sprinkles anecdotally into speeches,County Prosecutor Paula Dow said out of respect for her officeshe could not endorse a candidate for governor but is delighted to have made a favorable impression on bothChristie and Corzine.

In her own remarkstoday she held forth on the virtues of the latter.

"When Gov.Corzine took office, he made it clear that fighting violent crime was going to be cornerstone of his administration," Dow said. "We've worked arm in arm in every corner of New Jersey, in all 21 counties. …We've done it all under the leadership of our governor."

Some of the other lawmen and women in the background were those same uniformed or plain clothed cops who last year fought off the lumps in their throats long enough to shower Christie with gifts on the occasion of his retirement from the U.S. Attorney's Office at an event hosted by DiVincenzo.

Today they stood solemnly beside the governor.

"Everybody here has close ties to Chris," admitted DiVincenzo, who waved off the double digit deficitCorzine currently faces inmost polls.

"He believes most people are guilty to begin with,"said the mayor. "I will tell you, it is hard enough being mayor without wearing a label that he wants to hang on us of being corrupt." 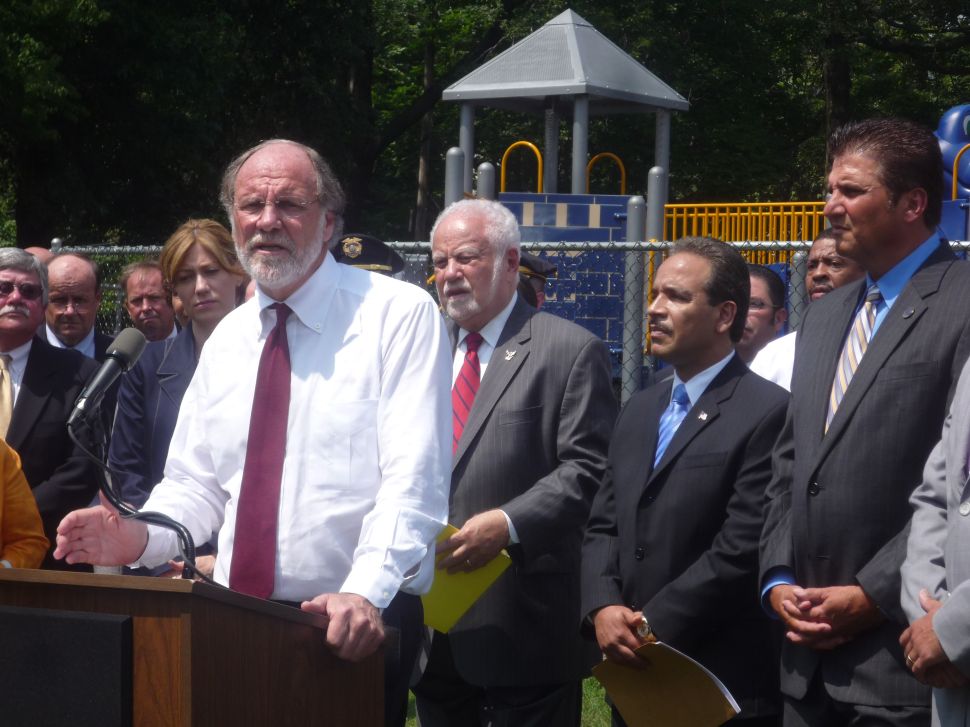