VERONA – Selling his record on healthcare today with the latest poll showing him trailing his opponent by nine points in a head-to-head, Gov. Jon Corzine said back chatter about a ham-handed reelection campaignencumbered by too many chiefsis a "non-story."

"Maggie Moran and Tom Shea are running the campaign," said the governor, where he appeared at a park in Verona with lieutenant governor candidate Loretta Weinberg.

Throwing the floodlights up on their own healthcare record and "values," the pairslammed, by contrast,GOP opponent Chris Christie's markets-driven health care proposals against the backdrop of scene-shiftingin Corzine-Weinberg '09.
Corzine has brought in former Bergen County Democratic Organization (BCDO) spokesman Bill Maer and Democratic Party strategist Jamie Fox, but the governor insisted the upper eschelon hierarchy of the campaign remains unchanged.
"We're enhancing, not substitung or replacing anyone," the governor said.
Assemblyman Tom Giblin (D-Montclair), Assemblyman Ralph Caputo (D-Belleville), Essex County Executive Joe DiVincenzo, and Verona Mayor Teena Schwartzstood with Corzine and Weinberg. DiVincenzo's own chief of staff, Phil Alagia, officially took a leave of absence from work this week to serve as Corzine's statewide political director.
The county executive's deputy chiefs of staff Bill Payne and state Sen. Teresa Ruiz (D-Newark) will juggle duties in Alagia's absence, DiVincenzo said.
"They specialize in different things," the county executive said of Payne and Ruiz, who ran against each other in the 2007 LG 29 senate race, which Ruiz won.
In a hastily scheduled phone counter-conference, Christie's lieutenant governor candidate Kim Guadagno ripped the Corzine campaign's new ad denouncing the health savings account model Christie's presented, which Corzine said would permit New Jersey healthcare plans to cut coverage for 24-hour maternity stays.
"Lies," said Guadagno. "What the Christie plan does is encourage competition."
Corzine took the opportunity to again lump Christie in with former Presiddent George W. Bush, who tried to cut the State Children's Health Insurance Plan (SCHIP) but ran into obstinate New Jersey Democrats – and some Republicans – and was forced to retreat.
"Standing up to the Bush administration, we established universal access to healthcare for all children and ensured women in New Jersey have access to the full range of healthcare services," said the governor.

"Together with Sen. Weinberg, who has been a champion for women's health throughout her entire career, we will continue to move New Jersey forward.

"My opponent is for mandate-free insurance policies," he added. "I don't think (Christie) took a position (on S-CHIP). I don't think he stood up for New Jersey's children."
Corzine said every childin a family makinga little above$40,000 and less iscovered, thanks to his administration's efforts on behalf of maintainingstate and federal funds. Since he has been governor,80,000more at-risk residents have joined the healthcare rolls.
"We have expanded the number of community health clinics – from 15-20 to 51-93 branches," said the governor.
Weinberg also praised Corzine for drivingthe Paid Family Leave Act, which enables families to receive compensationto take off work to care for a sick relative.
The senator choked up when she recalled her husband's death ten years ago and the last month of his life, "which was one of the most precious times of both our lives."
Corzine steadied her.
"That Family Leave Bill will have an untold impact on families for generations to come," Weinberg said. 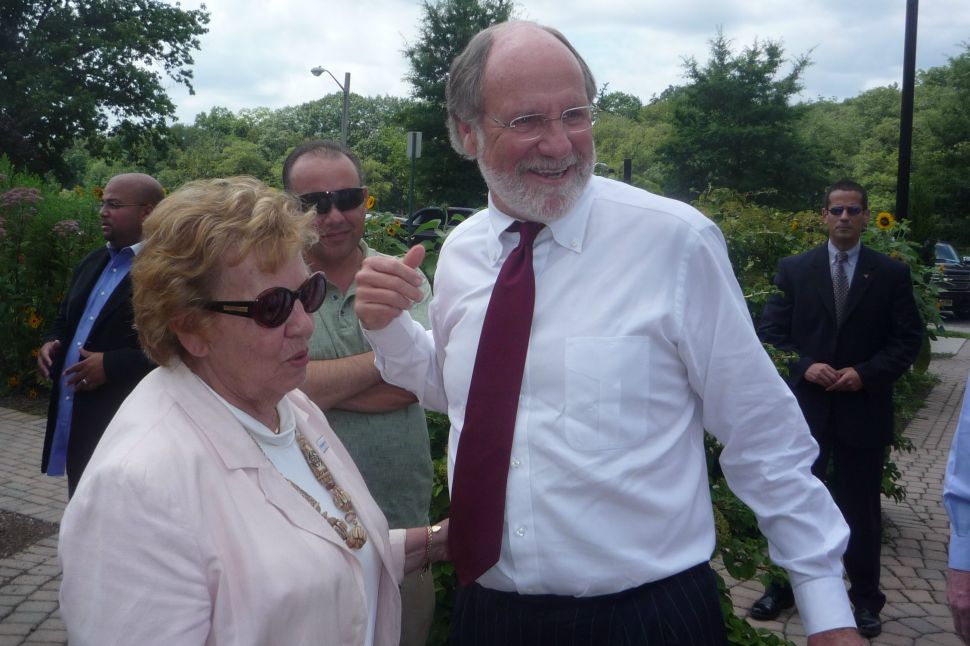