Depending on who you talk to out there, the gubernatorial election comes down to either independent strength in the suburbs with proverbial lunch bucket conservative Democrats compelled to cross over to join Republican challenger Christopher Christie, or a show of force by Democrats in the urban areas who, despite feeling less than inspired by Gov. Jon Corzine, are sufficiently roused to battle down the Republican Party.

A 12-year veteran of the legislature who lost his 2007 reelection bid when he ran afoul of the local Democratic Party machine, former Assemblyman Wilfredo Caraballo (D-Newark) said he believes the Republican Party brand is too damaged to sell here in New Jersey.

It's brand versus man.

"The Black and Latino vote will decide this race," argued Caraballo, referring to the 807,558 registered voters from those ethnic groups among the state's 4,702,833 registered voters. "The more the Democratic Party links Christie to the Republican Party, whether people like Chris or not, even if they think he's good guy, if Corzine's campaign hits home that Christie is a Republican, and underscores what that means in 2009, they will have implemented one of the most potent arguments they could use against Christie."

But "politics is cyclical," said Murray, "and the Republican brand definitely deteriorated with the war in Iraq, public perception about the Bush administration's response to Hurricane Katrina, and Republican confusion and disappointment over Bush Republicans spending like Democrats and increasing the debt. Then the recession hits and the number one problem is economic anxiety. All those events conspired over time – in addition to the fact that our former vice president was no plus in New Jersey – and all of a sudden it's very difficult to be a Republican in the northeast. But I think the worm has turned, the world is different now and Jon Corzine is to the Democrats what George Bush was to Republicans.

"We feel buoyed by that and we feel reasonably secure voters know Democrats have been in charge of Trenton, and we need to remind them what that's meant when it comes to pocket book issues," said Murray, who managed Christine Todd Whitman's campaign for governor in 1993.

For Caraballo, when it comes to Latinos, the most compelling case involves President Obama's nomination of Judge Sonia Sotomayor to the U.S. Supreme Court and her confirmation over the objections of 29 Republican senators.

"What is wrong with having a piece of the pie when someone seeking the bench is qualified?" Caraballo said. "If you contrast the Sotomayor story with the GOP becoming a southern party, it doesn't matter whether Christie is a good guy or not, he's a Republican, and that's what the message becomes. Christie has to sell the fact that the GOP up here not the same as the southern party. He has to find a way to keep the Lonegan wing of the party shut up, which is very difficult to do. He almost has to disassociate himself from the Republican Party."

The Democrats last week seized on Christie's phone conversations about politics with Karl Rove, the man who built his reputation as the brain of President George W. Bush. Corzine allies quickly cut an ad broadcasting the Christie-Rove-Bush link.

Notwithstanding Murray's contention that the clock ran down on Corzine, giving Republicans newfound opportunity, Caraballo said he doesn't believe the governor needs old boogiemen to make his best case, as urban worry about the contemporary Republican Party trumps Corzine's negatives, in his opinion.

"I'd stop making it about Bush and make it about the Republican Party," Caraballo insisted. "Just run the sound bite tape on the Sotomayor hearings. Go with some of the fundamentalists and even if people think Chris is a good guy, the fact is he's part of the structure. That's how Corzine wins.

"Corzine wants to win? Show poor people the anger being shown toward Obama for havng the temerity to attack more than one issue at a time," Caraballo added. "Send that message to poor people, who can't afford healthcare. sell that message – not only in Newark but in Salem and Sussex. We're talking healthcare and getting right-wing Republican vitriol in response. You point that out to people, and you can be sure this contest will be fought in the Newarks, the Hudsons, the Camdens, the Patersons and Elizabeths."

"When Jon Corzine ran against Bobby Franks, the issue for voters was how much money is this guy going to to spend to buy a senate seat before it just gets too vulgar," said the GOP consultant. "But now you have an environment where Corzine's name ID is damaged. His campaign manager, Maggie Moran, said the other day on Michael Aron's show, that the first thing you do in a campaign, you try to bring back your base. But you shouldn't have to do that. Now Maggie's bright, but what she should have said is you should not have to worry about bringing back your base.

"Corzine is not pulling Obama numbers," Murray added. "Turnout will be down 15-20 percent. Towns like Willingboro aren't going to be there for Corzine; they know that, and what you see from them is Bush, guns and abortion but all that is overridden by the reality of tough economic times and the perception that Corzine never risen as a public figure. He has no charisma."

"Then you have Christie. He's not a strident right-wing snap-out and he's not a knucklehead. He is, in fact, somewhat of a practiced public figure, hitting with Obama numbers coming down and capable of reaching independent ticket splitters."

Caraballo probably knows better than most the hazards of trying to run off-the-line against the North Ward Democratic Organization, which ran over him two years ago but has since suffered fallout related to that same campaign cycle.

Newark sources say the machine continues to suffer blunt trauma caused by an ongoing investigation into the 2007 campaign mounted by state Sen. Teresa Ruiz (D-Newark), which has already resulted in the indictments of five campaign workers.

Add that to the depletion of party operatives created by last month's federal sting in Hudson County and Christie's chop down earlier this year of Bergen County Democratic Organization Chairman Joe Ferriero, and it starts adding up to a substantially damaged voter delivery system in the Democrats' three biggest counties, two of which – Essex and Hudson – are heavily black and Latino.

Caraballo admits it's a challenge, and notes Christie's formidable campaign efforts to date in which the Republican has walked the streets of Union City and worked old connections in Newark.

"But here is where Corzine has to be smart," said the Democrat, who served in Gov. Jim Florio's cabinet before his election to the Legislature. "There are indeed organized party organizations but there are also lesser organized organizations – people who will look to their own self-interests. Is the chill on those political operatives who aren't behaving well? You bet. But I believe most people are behaving well."

"There's the old guard, but then there are younger folks trying to show that they can be the next generation of leaders inside and outside the power structure, Obama supporters who never had ties to local machines, and those are the people Corzine has to reach,"' Caraballo said. "Chris Christie has to say something like, 'Being a Republican is a good thing for you, and here are reasons why; and Corzine has to say, 'We're Democrats for a reason.'"

Corzine is on the ground in Essex County almost daily.

"Look at the 1991 gubernatorial election," Caraballo said. "Florio lost by 25,000 votes – almost the same number of votes that were absent in Newark compared to most years."

"There's no street movement," said the source. "It's too late."

However, "come September, that's when we get cooking," insisted a Union County Democratic Party operative. "We've been spoiled by rock stars candidacies and the right environment in recent years: Menendez, Corzine's first gubernatorial. We've had some cream puff elections, but we haven't forgotten how to fight." 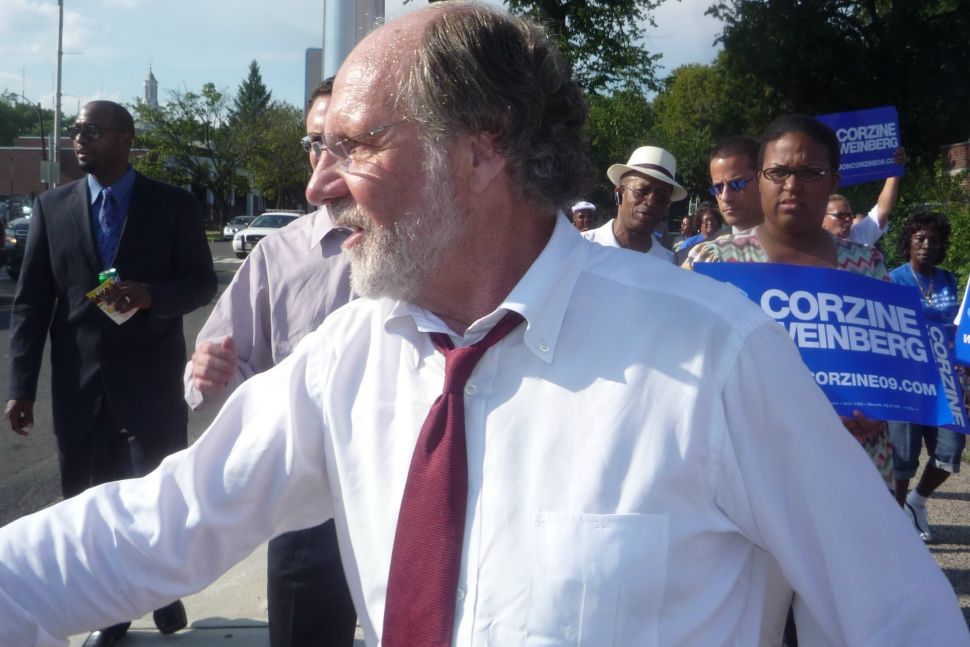