News about GOP gubernatorial candidate Chris Christie's failure to disclose a loan to a former employee and report the income on his federal income tax and fallout from his pre-campaign discussions with Karl Rove have Democrats alert to shifting terrain in the gubernatorial election even if they remain guarded about the outcome.

Ahead by double digits through the bulk of the summer, Republicans say the headlines are inevitable campaign turbulence, and not even close to death spiral spasms.

"We'll continue to work contrasts between Jon Corzine and Chris Christie," said Democratic State Chairman Joseph Cryan, who wouldn't identify this week as the first time in the cycle that Gov. Jon Corzine has appeared to have climbed off the political cold slab, a condition some polls have shown the governor to be in since he and Christie officially started their head-to-head rivalry back in June.

"At this point it's a horse race, but I'm feeling very confident the governor will be successful," said the chair of the Senate Budget Committee and a prospective candidate for lieutenant governor until Corzine picked her colleague, state Sen. Loretta Weinberg (D-Teaneck).

Buono toured Indian-American businesses with Corzine today on Oak Tree Road in Edison in her first campaign appearance with the governor since failing to lock up the LG spot.

Although he acknowledges Democrats have a battle in front of them, Marlboro Mayor Jon Hornik, a popular local figure who serves as chief executive in the second most voter-rich Monmouth County town after Middletown, says he finally feels confident saying he believes Corzine's ads are impacting voters.

"We are still (a long way away) and anything could happen but after a slew of Corzine ads tying Christie to Bush and Rove, maybe votes are starting to move into Corzine's camp," Hornik said. "I think the ads are very effective."

Brigid Harrison, professor of political science at Montclair State University says the Michele Brown story, combined with Rove and Marra are creating openings for the Corzine campaign to do damage.

"All these small incidents aggregate to form a negative impression of Chris Christie, and the reality is we're still waiting for Jon Corzine to start spending his money. It was reported that Corzine has spent $5.5 million versus $545,000 by the Christie campaign. That $5.5 million is a drop in the bucket."

The GOP doesn't think the ugly card will play ultimately, however.

Once a prospect for lieutenant governor on the Christie ticket before the GOP candidate selected Monmouth County Sheriff Kim Guadagno, state Sen. Diane Allen (R-Edgewater Park) thinks the Corzine record makes him inevitably untenable, regardless of what the economy does between now and Election Day and how much he spends to refurbish his political fortunes.

"Chris Christie remains the favorite based on what I hear on the streets," said the senator. "People are fed up with what's going on. They're overtaxed and overburdened, and I hear that from both Republicans and Democrats."

Allen scheduled a fundraiser for Christie for early next month and worried about turnout and contributions owing to the economic downturn.

"I thought in this economy people were going to say 'oh, gosh no, we can't donate,' but as of yesterday, we have pledged contributions of over $100,000," Allen said. "People are really interested."

Like others, Allen interprets the Brown story first reported by NJN News as little more than a Corzine campaign muck job.

"It's sad, the negative campaign the governor's running," said Allen. "There are going to be a lot of little things on both sides. In this case, the guy tried to help a friend. It's not a big deal. Was it a mistake? Yes, he should have been a little more scrupulous."

But the bigger issue for Allen remains what she sees as Corzine's failed record as governor.

"When he was elected I was hopeful that his business background would be helpful to the state, but I saw during the first budget how he played the same political and stuffed the budget with pork in one night," Allen said.

Assemblyman Declan O'Scanlon (R-Little Silver) is running in a district where two years ago he and his ticket mates, state Sen. Jennifer Beck (R-Red Bank) and Assemblywoman Caroline Casagrande (R-Colts Neck) wrenched two seats away from Democratic incumbents as Beck moved from the Assembly up to the Senate and pulled her running mates with her into the legislature.

Casagrande and O'Scanlon assumed they'd have a dogfight in two years.

O'Scanlon makes it clear he takes nothing for granted and runs as though he's behind, but Chris Christie's top-of-the-ticket presence in the Monmouth County-based district contributes to his underlying sense of security as he pursues reelection.

He reads Christie's negative news week as just part of the ebb and flow, but not foundational.

"I see Chris Christie in a very good position," O'Scanlon said. "I'm a pragmatist. You can't have all the news be rosy, but it says more about Corzine than Christie. If you look at all his (Corzine's) advertising, he's throwing a Hail Mary. The only way to beat Chris Christie is to brainwash people. The way I see it, if this woman had lent money to Chris Christie and he didn't report it, then you have a story. But the average person can picture himself in Chris Christie's position, lending money to help a friend. The only way for Corzine to deflect attention from his record will be to continue to try to scandalize the record of his opponent, yet the bottom line is people are despondent about New Jersey's government."

Warren County GOP Chairman Douglas Steinhardt said he has never seen his party so energized in the five and a half years in which he's served as chairman of this Republican stronghold, and doesn't believe the Brown or Rove stories will stick to Christie with any significance.

"Voters know the State of New Jersey today is in economic and political turmoil, and more people will relate to Chris Christie, a federal prosecutor trying to solve our problems, than to Corzine, a Wall Street banker who caused them," Steinhardt said. "As long as the economy continues to suffer, Corzine will not gain traction, not matter how many negative ads he runs."

Whatever the Corzine campaign's capacities are to sell his four years in office, Harrison said the GOP may run out of room on the economy, which is in part why the Christie bad vibe stories start to become a factor, in her view.

"No question the economy is the most important issue, but there have been enough inklings in the news media that perhaps the economy is actually growing again that the Democrats will be using that message," Harrison added. "If the economy takes another hit and tanks after Labor Day then Corzine is in real trouble but otherwise it works to Corzine's advantage."

Patrick Murray, director of polling at Monmouth University, argues the chief reason why the stories tally against Christie is because of his early declaration in the primary that he, as a candidate, is "different."

"The Michele Brown and Karl Rove stories go to the core of Christie's campaign strategy," said Murray. "His brand is he's not a typical politician and the news violates that. He's willing to overlook i's he needs to dot and t's he needs to cross. He forgets to fill out financial disclosure forms. These are things that undercut his brand. The difficulty for him is he put all his eggs in that basket. Even before last week's news we were seeing that steady drip of his numbers starting to drop." 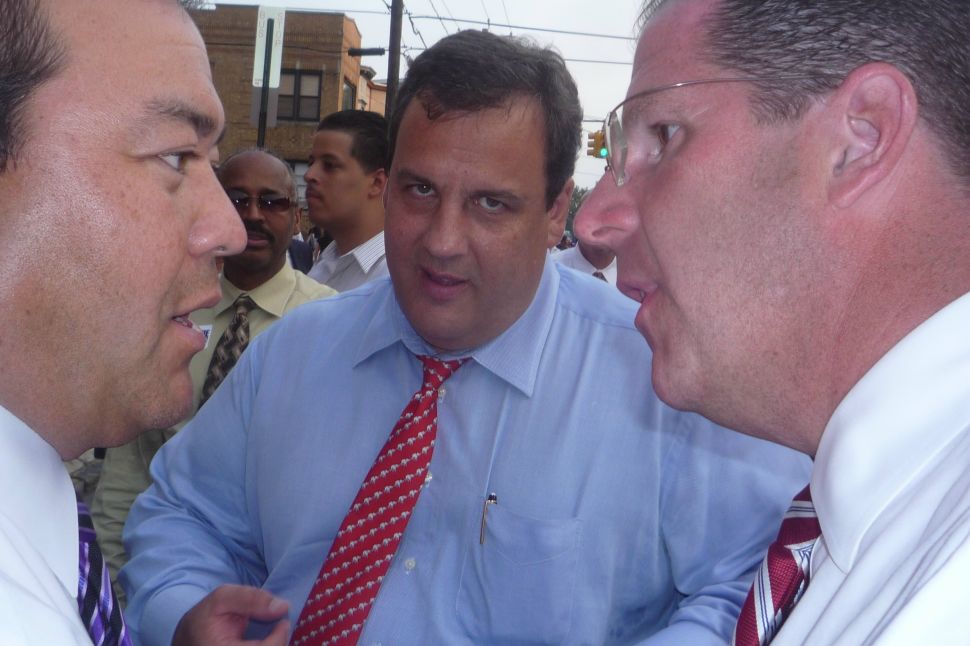