NEWARK – Stunned by an ongoing state investigation into the absentee ballot operations of the North Ward Democratic Organization and up against the reality of a Democratic incumbent governorwho doesn't send pulses racing, Newark operativesarecounting on the GOTVpower ofa ginned-uplabor movement here – as elsewhere.

"What the union effort does is supplement what's there on the ground," said Assemblyman Thomas Giblin (D-Montclair), president of the Essex-West Hudson Central Labor Council.

"The resurgence of the Democratic Party in New Jersey is a direct consequence of theunpaid union effort, with different labor organizationscarving up the city (Newark) and taking different assignments by ward to get a lot of mundane, nitty-gritty jobs done," Giblin added.

To date, the gubernatorial ground game has looked grim for Democrats in Newark, where party members outnumber Republicans, 64,822 to 3,413, but where a state Attorney General's Office investigation into state Sen. Teresa Ruiz's (D-Newark) 2007 senate campaign – run by the city's most powerful political operation – has so far resulted in five indictments and unnerved political street people.

Other parts of the city aren't exactly feeliing a Gov. Jon Corzine vibe.

"It's dead," a South WardDemocratic Party operative speaking on condition of anonymity said three weeks ago. "There's no street movement."

Telephone pole signs tacked in recent days depicting Christie's facedoubled up with that of former President George W. Bush and the caption: "Shared Values, Same Results,"in the vicinity of where Christie worked as U.S. Attorney at the Pete Rodino Federal Building, show some early, soft-spot intent.

That, coupled with the governor's stepped-up schedule in Newark and the environs,have laid the groundwork for the organizational push from labor over the final two months of the campaign.

"We had a big turnout for Corzine at a South Ward back-to-school event this weekend, andI sensethe campaign'sstarting to gain a groundswell," saidPhil Alagia,Corzine's statewide political director, who officially started his job two weeks ago."People are canvassing well ahead of where we were with our operation four years ago. We're significantly more engaged. Today, four years ago,I was on my honeymoon. Weweren't really engaging this early."

Post Labor Day,the unions will kick in their strength.

"We estimate that ourlabor voteis 1.2 million statewide- that's the number we've targeted for ourselves," said Charles Wowkanech, president of the New Jersey AFL-CIO. "We're going to run our labor program to make sure our members and their family members get out to vote. I'm taking the governorto Philadelphia today to meet with the leadership of Philly unions. We were in New York last week doing the same thing. We want to make sure they're doing our program -mail, robocalls, walks,and a few new things this year."

Wowkanech anticipates the participation of 10,000-15,000 labor volunteers before it's all over on Nov. 3rd.

The presence in the gubernatorial contest of independent candidate Chris Daggett, warring with Christiefor independent and suburban voters,has urban operatives especially confidentin the base voteslabor can muster for Corzine.

"Labor's going to be what puts Jon Corzine over the top," said Essex County Democratic Party operative Lionel Leach. "It's that important pieceto all of this, and next week you're going to see laboroperating in15 out of 20 counties."

Observing experts don't discount the import of labor in an election like this.

"We can expect this to bea very close election, and therefore the candidate with the best field operation is the candidate most likely to win," said Ben Dworkin, director of the Rebovich Institutefor New Jersey politics at Rider University. "Unions are always part of the Corzine strategy. There was a time when there was tension between Corzine and the unions – mostly the public sector unions – but it appears thatChris Christiehad to go so far to the right in his battle with Steve Lonegan inthe Republican Primary that he chased the unions back to Corzine."

Republicans who have observed -or in the case of state Sen. Kevin O'Toole (R-Cedar Grove), facilitated – Christie's efforts to harvesttrypically Democratic Party votes from either uninspired local elected officials, clergy members and/or community activists, say labor was a given from the start for Corzine.

"Of course labor's ginned up," said O'Toole. "But the point is that's all Corzine has. That's virtually the only group left. The fact that Christie is finding other targets of opportunity in Democratic territoryshows Corzine's weakness in what should be his base."

Sources say NewarkCity Council Vice PresidentLuis Quintana, for one, continues to keep the Christie-Corzinerace in crisis, and has not formally made an endorsement.

But one of the Democratic Party operatives who earlier this summer expressed worry about the lack of urgency hesaw in theCorzine camp, who left the Obama rally at the PNC Arts Center more worried about the absence of nuts and bolts activity than inspired by the President's oratorical power chords,today said the operation's changed.

"He's starting to turm the corner," Charles Williams said of the governor."He's visible and attentive. We're doing the pre-GOTV now and looking good. But the unions are going to be huge for us. When laborers see they have a job at the end of the day and realizeCorzine may have cost them a week or two weeks in furloughs as opposed to their jobs, man, I think most would rather take a furlough as opposed to a layoff. Christiesaidunder him there would be layoffs, and most people know that wouldn't be theproper thing to do in this economy. Once the unions kick in, itwill be different type of ballgame." 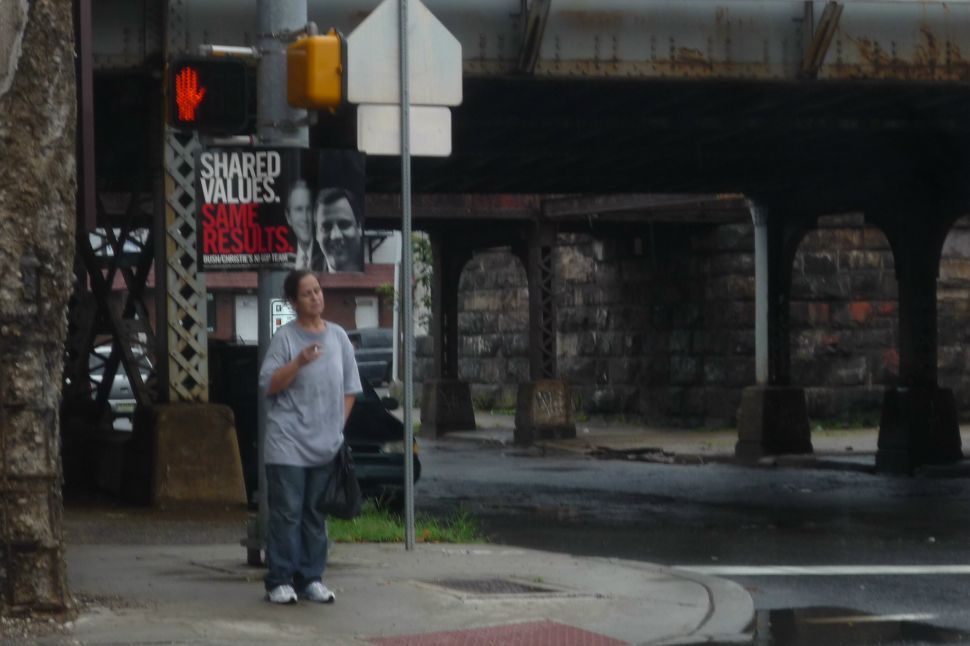