A combustible gubernatorial campaign ignited this week with competing newsflashes that do damage in both camps -just how much damage is creating accelerated intrigue with 82 days until Election Day.

Already trying to put distance on a bombshell from last month in which federal law enforcement officersarrested 29 mostly Democratic politicians and political operatives on corruption charges, the governorsuffered his own headline headaches with news that 10 adult training programs run by the state Department of Human Service's Division of Developmental Disabilities blew $1.4 million.

As uncomfortable as the double impact news is for the Corzine camp, Corzine allies argue that the state comptroller's decision to pull the trigger on his damning report of a Corzine administration department points to the governor's appointment of a good man for the job in Matthew Boxer, whileexperts say the bigger, potentially more damaging story is the Rove narrative.

"A lot of that stuff about the waterfront commision and the comptroller report will fly under the radar," said Patrick Murray, director of polling for Monmouth University."It's not something that Corzine will carry all the blame for.The fact that there'swaste and fraud in state governmentis not new to voters. The Rove side is more dangerous stuff for Chris Christie. People know who Rove is and there is still a Rove-Bush negativity resonance.

"WhileChris Christie canclaim that when he was U.S. Attorney he had conversations with anyone about his political aspirations is one thing, but the fact that it was Rove makes it harder," Murray added."The fact that he was on a loyalitylist and then a potential firing list raises questions. For the Corzine camp this is an easy sell, and for Christie potentially a very deep hole forhim to dig himself out of, mostly because people in New Jersey are tired of partisan politics, andBush and Rove represent the worst in partisan politics."

Even as the Corzine campaign hastens to create ads blending images of Christie and Rove, Republicans are confident the Bush boogiemanfactor has come and gone in New Jersey politics.

But state Sen. Barbara Buono (D-Metuchen) says O'Toole's efforts to tryto runCorzine into the comptrollerstoryline as though this governor is a ham-handed manager, don't tell the whole story, and in fact, won't command much traction in the governor's race, in her view.

"This is not news, this is a systemic problem going back for decades," said the chair of the Senate Budget and Appropriations Committee."The legislature's own auditor has been uncovering many instances where there has been lack of transparency with state contract procurements."

The issue at this point is whether this particular comptroller can follow through and enforce the results of his audit,said Buono, who fought unsuccessfully for an alternativecomptroller bill which would have requiredthe ofifcerto pre-approve contracts under $10 million – so-called small contracts.

"That is the tip of the iceberg," Buono said of Boxer's $1.4 million dredge from the Division of Developmental Disabilities."This is potentially a turning point but the test is whether he folows through with truereforms, which he has the authority toimplmentunder the statute."

"The rampant corruption, fraud, waste and abuse at the Waterfront Commission of New York Harbor is unacceptable," Guadagno said."What is even more unacceptable is that it took an embarrassing report and a personal visit from the New York Inspector General to Governor Corzine to make him realize the extent of the corruption and convince him that New Jersey Commissioner Michael Madonna should be fired.It is yet another example of Governor Corzine's obliviousness when it comes to New Jersey's culture of corruption and consistent failure to proactively engage on ethics – unless negative headlines make it politically convenient."

“It’s now clear that Christie was laying the groundwork for his gubernatorial campaign while he was serving in the U.S. Attorney’s office,” Weinberg said. “His phone calls with Karl Rove and meetings with high profile Republicans to plot his run for governor appear to directly violate the Hatch Act. Given the scope and sustained period of time of these meetings, it’s critical that the U.S. Attorney’s office honor our FOIA requests, so that we know who else in the US Attorney's office knew of and/or participated in this political activity.”

As compelling as the Rove headlines were this week and as much as the state news headlines may create openings for the GOP, O'Toole likened Corzine's political situation to " torture," with other more significant narratives evolving, especially since last month's corruption bust.

"It's Rove today, but next week, it's more Corzine failure," O'Toole said."There's still a larger story out there about the depletion of Democrat infrastructure in Hudson and Essex. People are walking aroundthinking about who'swearing a wire, they'renot talking about jamming the vote out for Corzine. They're talking about survival."

Moreover, "Obama's postives are dropping," said O'Toole, happily noting the Corzine campaign's cornerstoneefforts torun their candidate as a friendly phone call away from the commander-in-chief.

"We're looking at a situation with Obama's healthcare plan meeting resistance and this is coming to a head as Corzine is trying to define himself as an Obama ally," O'Toole said.

But like Murray, Dr. Brigid Harrison, political science professor at Montclair State University, said the Rove storyline has the most snowball effect potential, and consequently chalks the week up as a Corzine win.

"With most polls indicating Corzine holding his own or improving, what we're seeing is a typical closing of the gap where Democrats start surging around Labor Day andthe Rove news in particularwill give the Corzine campaign continuing fodderas they try to secure Freedom of Information Acts(FOIA) aboutChristie'stenure at the U.S. Attorney's Office," Harrison said.

To Corzine's questions about Christie's political planning while he was U.S. Attorney and the context of his conversations with Rove, the Christie camp promptly countered with a YouTube ad stringing together clips of Corzine heaping praise on New Jersey 's former top cop, but Harrison said she doesn't see a contradiction in Corzine now questioning Christie's political motivations, given Rove's testimony this week that he talked to Christie.

"You can on the one hand prosecute white collar crime but at the time it wasn't apparent he hadconversations with Karl Rove," said Harrison."We don't know what he did that was political, andon the public's part there remains a lack of awareness."

O'Toole argued that Corzine has already spent millions trying to blow up Christie, and the best he's been able to do is go from 12 points behind a month ago to nine points back this week in the latest Quinnipiac University poll.

The Democrats can run the ads of Christie's face morphing into Rove's, said the Republican senator; "They've been doing stuff like that all along, and so far, it hasn't penetrated." 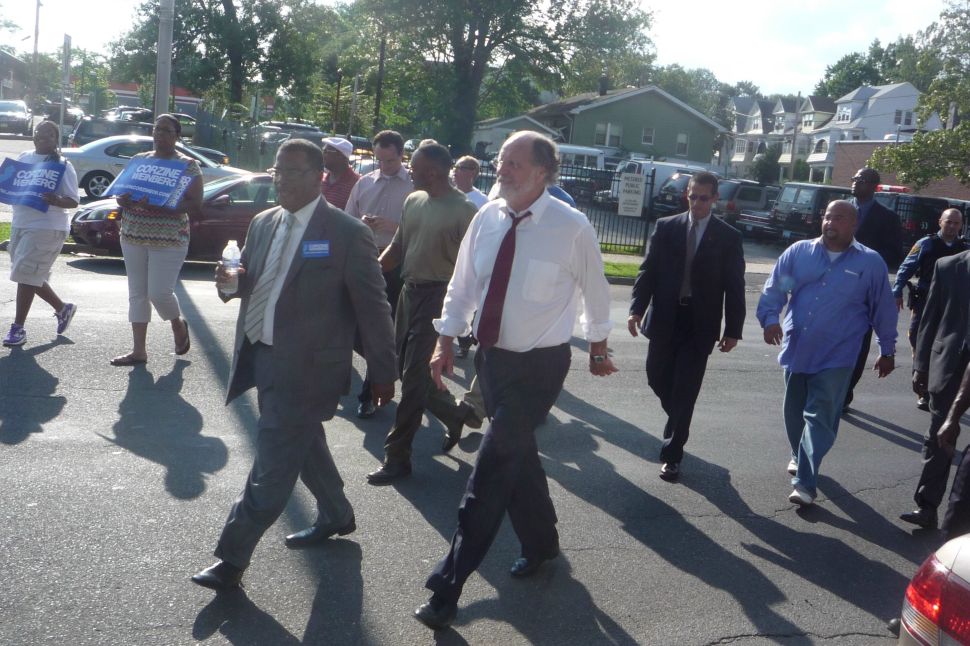