"I've lived my whole life in Rahway and it never looked like this," the smiling barrister said of the 10-year old station and subsequent business buildup, which includes a Soho-style coffee shop, which opened in June.

"Sorry," the governor told a youngwoman sunbathing on the rooftopas he strode past with Mayor James Kennedy andtook a look at the industrial wasteland to the north where the train track snakes toward a heat-hazed New York skyline.

Then theystrolled to the other side of the roof and looked west at the green treetops stretching into the same filmed-over distance.

Moments later, Corzine and Kennedy were backat street level and pushing tables together in the coffee shop to swap shop talk with areashop owners, mutually cowed by the economy but encouraged by bonding around thisbusiness hub.

Part of the big sell here – and Kennedy backed up the governor on this point -is a state tax credit programfor urban transit hubs like this one.

"As it relates to small business," the governor added, "we have a program, Investment Jersey,which offersa $3,000 grant for each incremental new job."

There were inevitable impressed shrugs characteristic of photo ops with powerful men running for office, even those battling nine points behind the opposition. Of course, thisis a solid Democratic town: 7,065 registered D's to 1,708 R's (out of 15,777 total voters), according to Clerk Jean Kuc.

It'sa local issue Republicans hope will keep Democrats in squirm mode as they turn it into a seam line that ultimately wounds Corzine.

The Board of Education suspended Akbar with pay from his elementary schoolteaching joblast week, simultaneously refusingto release details aboutthe suspension.

"Apersonnel matter," is what the board told the Star-Ledgerconcerning the status ofthe government employee.

"Mayor Kennedy has never hesitatedin the past when hecalled on former Republican CouncilmanFrank Janusz to resign over minor andfrivolous allegations that were never proven to be true, yet now (when) it's a Democrat in serious trouble the mayor won't actsaying this week, 'unless a crime has been committed,'" said Cassio.

According to the Ledger, Akbar on June 10th pleaded guilty to disturbing the peace rather than contesting assault charges in a trial. There's more, too, but that's what the School Board won't discuss.

"He has to take care of the issue with the School Board first," Kennedy told PolitickerNJ.com when asked today if Akbar should resign.

A Steve Lonegan supporter in the GOP primary who famously stood in hisRahway driveway to endorse Lonegan on the same day Christie rolled out the endorsement of former Gov. Thomas Kean at the Bernardsville Inn, union carpenter Cassio describes himself as enthusiastically on board the Christie team.

"I like what the plan is," he said."We want to win and we want to kick their butts. I would say 80% of Lonegan's people are on board with Christie. The 20% who are not I have complete respect for. I'm the Republican chairman here, so I can't pick and choose who the gubernatorial candidate is. Having said that, I think Chris Christie is a good candidate."

But maybe the more telling stat was the low voteroutput for Corzine, who earned a total of 580 votes in the primary here against what amounted to token opposition.

In his sitdown with business leaders in the uplifted infrastructue of the old factory burgh, Corzine was sure to hit some buzzwords in an effort to project outward to voters who aren't necessarily rank-and-file Democrats.

For one, in answer to a question about how he might be able to expedite building permits, hegave a self-serving shoutout to rival Chris Daggett, an independent candidate for governor who justyesterday landed the Sierra Club endorsement ahead of a flummoxed Corzine.

"Chris Daggett came in to help find ways to create permit efficiency," the governor told the circle of business leaders, referring to Daggett's chairmanship of a commission to hone the state Department of Environmental Protection (DEP).

"We want to rebuild in places like Rahway as opposed to cornfields," the governor added in what sounded like a shore-up on the heels of yesterday's Sierra Club diss. "A lot of permitting depends on what the community wants in order to go forward."

Then he gave a nod to his onetime rival for the U.S. Senate seat, Bob Franks, a Republican who Corzineinvoked as ateam player inassisting New Jersey's pharmaceutical industry development. 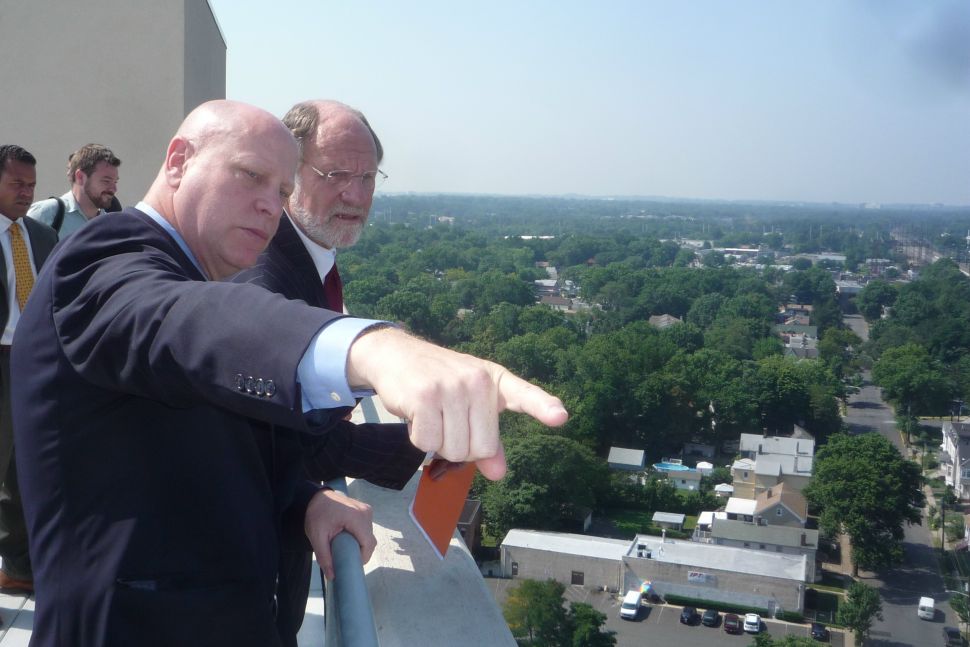