EAST BRUNSWICK -Sheriff Kim Guadagno, Republican candidate for lieutenant governor,works the crowd the same way she did two years ago when she ran for Monmouth County Sheriff and squeaked out a win over popular Belmar Police Chief Jack Hill.

She touches a lot of hands. The shakes are firm, friendly. Keep in mind, this isn't Monmouth County.

Twelve days after she joined the Christie campaign in the number two slot,she's here tonight to gnawat the edges of this sprawling target of opportunity called Middlesex County.

"No comparison," he adds.

Sensingdiminished opposition spiritsthis year with Gov. Jon Corzine breaking a sweat if failing to breakout of a slump,and Assemblyman Joe Vas staring at corruption charges in the 19th Legislative District and his replacement, South Amboy Mayor John O'Leary, also apparently flailing, alot of GOP party allies pour into the breach between booths, where rubber frogs fly through the air with the drop of a mallet and the giant ferris wheel, astandard at the Middlesex County fair, spins high above Cranbury Road.

"It's not enemy territory,"insists Guadagno ofMiddlesex, which Barack Obama sealed last year by a60 to 38.5% margin.

"There are noparties when it comes to Chris Christie and Kim Guadagno," says the candidate."The situation with the economy -Monmouth County, Middlesex County, all over New Jersey – is so bad that we don't have time to dabble in conservative or liberal. We don't have time to dabble in Republican or Democrat. We have to do what's right for the people of the State of New Jersey no matter what their party is."

She meets the warm handshake of Gloria DeMatteo of East Brunswick, who fell out of GOP ranksfor a while then came back to stand at attention for Christie and Guadagno.

"He's got a good track record going after white collar criminals who are robbing us blind – you know, like the bust we had in North Jersey just last week," says DeMatteo.

McBlue doesn't vote, for one.

If it otherwise has the feel of a Guadagno diss it appears accidental, butironically,the robotis a frontman for the Middlesex County Improvement Authority. Hecrows a programmed message aboutthe authority'svirtues, providingan invitation for local Republicans to grumble about whatthey can only identify as aDemocratic Party patronage dumping ground.

But they don't let much get them down.

"I don't have any doubt about the ticket at this point," says Gary Holsten, a retired East Brunswick Police Department lieutenant and a candidate for council in Milltown, referring to Christie-Guadagno. "I'm looking ahead to once they get in there, and the corruption they're going to expose from the inside. Next time – next year, even – it will be easier for Republicans."

"I think there's a big opportunity in the 19th because the other party is doing a lot of things wrong," says Ortega.

He's reminded of Guadagno's 2007 endorsement of 287 (g) as a law enforcement tool to combat the influx of undocumented workers.

"That's something I wouldn't want to comment on until I had the opportunity to talk to Sheriff Guadagno," says Ortega. "I am a member of the Latino Leadership Alliance of New Jersey and that is a concern but I want to make sure I understand her position."

Martin Perez,president of the alliance,worries about Guadagno's 287 (g) record, and remembers that Guadagno made the issue "a cornerstone" of her 2007 campaign for sheriff.

"He should sit down with me," Guadagnosays of Perez. "Go back and look at the video tape and you will find that we said if you commit a crime in Monmouth County youshould be processed by immigration officials and if and when appropriate be deported. That is entirely consistent with what the Supreme Courtof New Jerseysaid not too long ago, maybe last week; that you can increase the amount of bail on somebodyat the risk of flight."

If Latinos are an emergent force in Middlesex County politics so are Indian Americans, who routinely call MiddlesexIndia's U.S. capital.

Alert to the demographics, Middlesex County Republican Chairman Joe Leois fieldingtwo Indian candidates this year – one, Peter Kothari of Woodbridge in the 19th District and the other,Salim Nathoo of Piscataway in the 17th.

"The excitement for us this year starts with the top of the ticket," says Leo, sitting in acrammed – and oversized – GOP tent as Guadagno continues to mix.

"He'll have no trouble getting reelected," Assemblyman Sam Thompson (R-Old Bridge) says of the Republican chairman, who today officially learned ofConservates with Attitude blogger Michael Illions' intention to run for the county party chairmanship next year. "If Mr. Illions' (who supported movement conservative Steve Lonegan in the GOP primary) attitude toward the Chris Christie candidacy is any indication of his standing in the Middlesex County party, Joe will be chairman again if he wants it."

Farther up the grassy trail, a small booth barely ekes out atent cornerand inside,two small Corzinesignsare tacked well back of the entrance. One of themoccupies a wall behind a "Lautenbergfor U.S. Senate" sign.

"Freeholder Ron Rios stopped by earlier," says one of the volunteers.

To call the mood here taciturn might be overkill, but on this night at least,the majority party's tenthardly radiates karmic bliss.

"It's much smaller than usual and there's no one there,"gloats Katz with a grin as he hustles after the crowd that trails Guadagno. 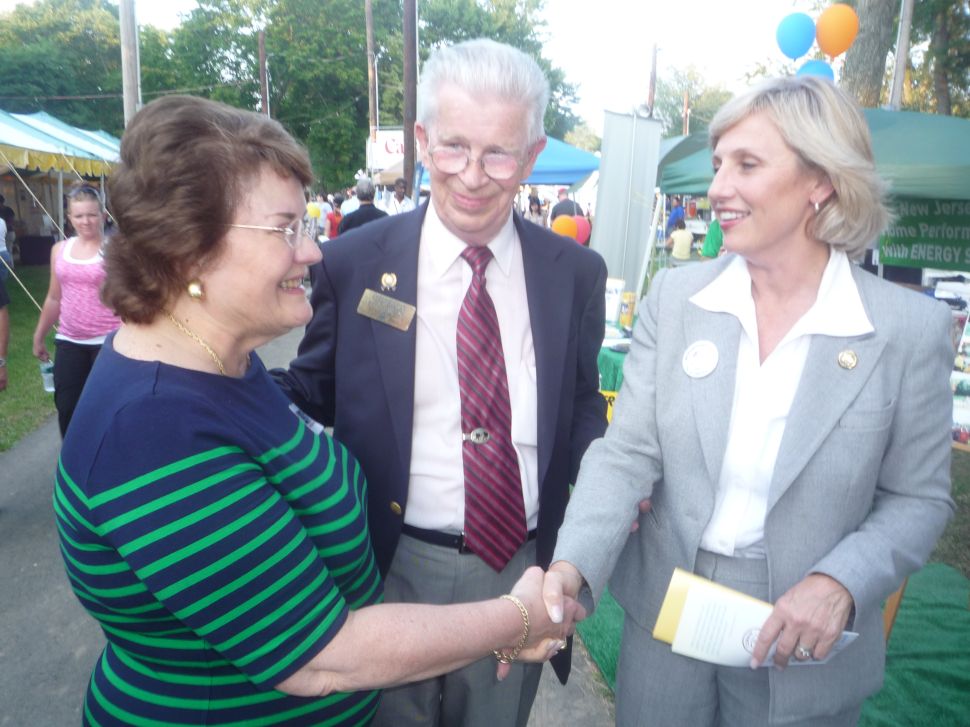