Paterson Mayor Jose "Joey" Torres wants a thirdterm in office and believes he can turn back the challenges of Council President Jeffrey Jones and whoever else tries to knock him out next year.

"Obviously, I'm running," Torres told PolitickerNJ.com. "I want to do everything I can to reelect this governor this year, but after November I'll put my own campaign hat back on."

To today's news that Ward 6 Councilman Andre Sayegh is mulling a run for mayor, Torres said, "We live in a democracy and whoever wants to run can run. That is the process.

"The thing about Andre isAndre wants to be president and everyone knows that," the mayor added."This is about how fast he can climb up the ladder. Idon't know the answer to that question.I dont know how fast he can climb. I just hope he doesn't burn himself out, because as you know, this business is beyond telling jokes and kissing babies. Andre – withjust a year on the council – isnot prepared to be mayor. He's still(wet) behind the ears."

Up for reelection himself as an at-large councilman, Jones has repeatedly slammed Torres for being Paterson's big development mayor, and Torres welcomes the characterization.

"Over the past sevenyears, we have had$800 million of new developmentin the city," said Torres."That's what you do. You build your town. These guys – they don't know how to do it. Leadership is not a popularity game. With Andre, if he runs, it's more of an exploratory thing since he's not up for reelection this year, but if Jeff wants to lose his seat on the council, so be it."

While Jonespublicly considersbacking GOP gubernatorial candidate and former U.S. Attorney Chris Christie, Torres said he is a proud backer of Gov. Jon Corzine and sees his service as strongly linked with this governor.

"I have acted publicly as a surrogate for the governorbefore and I will be there again in this campaign," said the mayor. "Thegovernor is doing a wonderful job and has been a great partner for Paterson. Look at how much progress we've maintained under difficult times. Look at the budget choices this governor has made and how they positively impact our city. Seventy-two percentof our residents qualify for the tax rebate program. Crime is the lowest in this city since 1965 – that's the FBI index. There are three new schools being built in this city right now, thanks to the partnershipbetween the Statehouse and the City of Paterson.

Rumors that At-Large Councilman Rigo Rodriguez will forego running his own at-large race next year to back Jones for mayor, thereby creating a powerful African American/Dominican American political alliance, don't deter the mayor, he insists.

He's running for reelection regardless of whatever deals the other players cut.

"I want one more term," Torres said. "And as I've said before, this would be my last term. In the meantime, whoever wants to face me, can face me. The more the merrier." 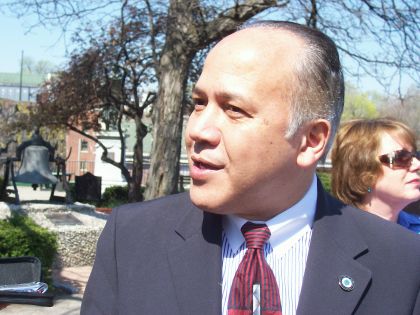