Of those four men, Torres and Jones are definitely running.

Sayegh appears close to getting in the race, while Rodriguez, who's at-large council seat is up this year, appears least likely to challenge Torres.

"No comment yet," Rodriguez said about next year's already unfolding contest.

One candidate and one prospective candidate for mayor leftthe swearing-in ceremony together:Jones and Sayegh.

Atthis event attended by both Gov. Jon Corzine and his challenger, GOP candidate Chris Christie,Jonescalled out to the former U.S. Attorney, who strode across the stage out of earshot.

Not a big Corzine fan, the council president hasleft open the possibility that he could back Christie over the incumbent Democratic governor, but this morning he seemed to be leaning more toward Corzine than Christie.

Without outright flipping the switch on an endorsement, "Jon Corzine is a Democrat," Jonessaid. "Iam a Democrat."

Still,he made clear he sees more similarities between Corzine and Christie than anything – not a bad thing, in this particular case.

"By seeing the two gentlemen there talking similarly,I think everybody has to see we have to be very clear about looking for qualified individuals," said Jones, referring to Corzine ad Christie's mutual embrace of Valdes, the nation's first Dominican American lead prosecutor, which Jones celebrated.

He denied he's hammering out a deal with Rodriguez for the at-large councilman's support, an alliance that would make Jones – with an African American and Dominican base of support – the likely favorite in a showdown with Torres for mayor next year.

"Ihave made no deals," said Jones. "We'll talk, we'll leave the conversation open. Ilike CouncilmanRodriguez;I like all my council colleagues. They all bring something to the table."

For his part, Sayegh said he was happy to be part of history with Valdes the Dominican breaking a glass ceiling.

As for the presence of the two gubernatorial candidates, "Iwish they'd be that cordial on the campaign trail," said the councilman, who described himself as a Corzine supporter.

Of the candidates and prospects, only incumbent Torres has placed himself squarely and enthusiastically behind Corzine's reelection. 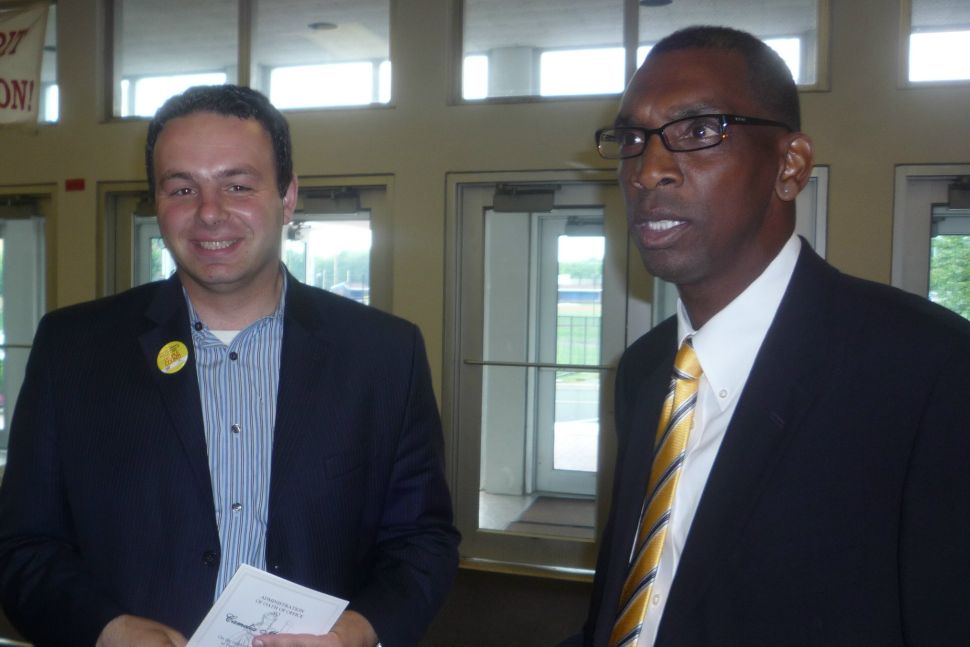