WOODBRIDGE – Saddled with a subpoena to nowhere – at least to date – during his 2006 U.S. Senate bid by the office of then-U.S. Attorney Chris Christie, U.S. Sen. Robert Menendez (D-Hoboken) has lived with the open-ended question mark of that probe ever since.

Now Christie is running for governor and Menendez allies say the senator has a personal stake in reelecting Gov. Jon Corzine.

Going back to January of 2006, Christie's name appeared on a federal Attorney General's list of U.S. Attorneysslated for firing, then came off the list afterinformation leaked in the middle of a contentiousU.S. Senate campaign that Christie was probing Menendez.

"To be very honest with you,I think more needs to be done," Menendeztold PolitickerNJ.com."I think the agreement entered into by the House Judiciary Committee with Mr. Rove's attorneys were limiting in nature.I understand that there's an investigation going on by the Justice Department andI believe that investigation needs to be vigorous andI also believe that in light of the information that's come out that maybe the Senate Judiciary Committee should be looking at a continuation of what that information reveals."

Menendez said he has not had any discussions with the U.S. Attorney's Office – not personally – regarding the status of his case and whether the federal probe is officially dead.

"Ithink it's incumbent on theU.S.Attorney's Office to come to come to a conclusion, particularly when it involves a public official, and to let that conclusion be made public," the senator said. "That's been my position for over four years.

"Because the most important thing that every American – we just had a debate about a Supreme Court Justice, andI recite what it saysabove the mantleas you enterthe Supreme Court – the most important thing is 'Equal Justice under Law.' That means whether you are Democrat or a Republicanor an independent, you are not going to be prosecuted because of the nature of your affiliations. That's been put into question by the information that's come out."

In addition to the old story with Christie's U.S. Attorney's Office, there are several other factors converging here for Menendez that makes Corzine's reelection campaign against none other than GOP nominee Christie that much moreof a crucible for the veteran Hudson County product.

"Christie almost derailedBob's career," said a Democratic Party insider, who spoke oncondition of anonymity. "Bob takes this personally. And he won't forgetwhat Corzine did for him. It was Corzine who named Menendez as the U.S. Senator."

Behind the scenes, Menendez has complained loudly about Corzine '09 structure, message and passion. He's beenhands-on and in Corzine's face onseveral occasions.

Then there's other federal activity on Menendez's home turf, as late last month, the U.S. Attorney's Office zapped 29 elected officials and political operatives with corruption charges. The bulk of them came out of the Democratic Party political machinery of Menendez's own county, leaving party members to ponder bitterly the depletion of GOTV infrastructure in the lead up to Corzine v. Christie.

"First of all, the one thing thatI think everybody's missed – it's the people of Hudson Countywho take their involvement seriously in this and take seriously the importance of electing their representatives," Menendez said."Iam sure the citizens ofHudson County will come out in a robust way. Various entities – political as well as civic – will bring out a robust vote andI am convinced that robust vote will be for Gov. Corzine overwhelmingly."

Max Pizarro is a PolitickerNJ.com Reporter and can be reached via email at max@politicsnj.com. 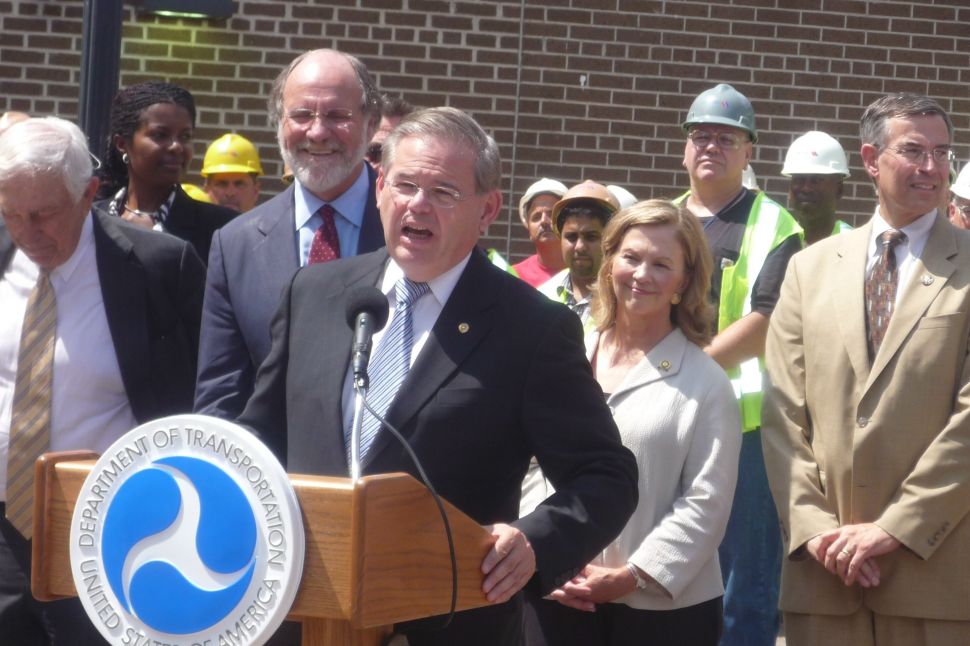