First Assistant U.S. Attorney Michele Brown, who found herself at the center of the contest for governor over a $46,000 loan Republican gubernatorial nominee Chris Christie gave her when he still headed up the office, has resigned, the Star-Ledger reports.

Brown said she did not want to "become a distraction."

"I am extraordinarily proud of all the work we have done and all the good we have accomplished on behalf of the people of this state," Brown wrote in her resignation letter. "I also know how important it is that we continue to pursue our mission, and I do not want to become a distraction from the critically important work we do."

Brown was prosecutor in the office since 1991, predating Christie by a decade. After Christie was appointed to head the office up, she became close friends with him and his wife, Mary Pat. She was promoted to the No. 2 spot by Christie shortly before he resigned in December, 2008.

In October, 2007, Christie loaned Brown $46,000 by taking out a mortgage on her house, and she continues to pay him back in monthly installments. That revelation cost Christie political points as the Cozine campaign seized on it and Christie's failure to disclose it to point to conflicts of interest and weaken him on ethical issues.

Christie told reporters today that he would not ask Brown to pay the loan off early.

Acting U.S. Attorney Ralph Marra — who has also found himself brought up in the gubernatorial campaign because of a reported internal investigation into whether comments he made at the "Corruption Thursday" press conference could have helped Christie's campaign –said that he accepted the resgination regretfully.

“It is with great regret today that I accepted the resignation of Michele Brown as an Assistant U.S. Attorney. Michele dedicated and distinguished herself fully to the honorable cause of justice as a federal prosecutor in New Jersey. I and her colleagues here will miss her greatly.” 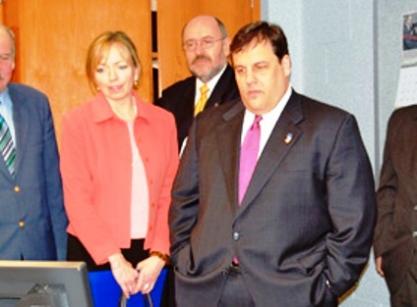