To Union City diehards like Henry Munker, Corzine's presence as a Democratic incumbent governorat the annual National Night Out street festival in a city where registered Democrats outnumber Republicans around 14,800 to 1,400 was less of an eye-openerthan Christie's hour-longstride through with Stack.

"Never," was Munker's blunt response when asked when he last saw a Republican candidate for governor make the trek into Union City in search of votes.

"I heard you had a vistor here," Corzine told Stack after the two men shook hands.

The pair proceeded to reconnoiter the same crowd-packed street Stack had just traversed with Christie, stopping every few steps to pose for pictures and huddle with well-wishers.

When they reached the boxing ring in the middle of New York Avenue, where twowelterweights by the looks of them were sitting in their corners and waiting for the bell, Munker stepped on the bottom rope, ducked a shoulder under the toprope and straightened.

Corzine and Stack climbedonto the apron and upinto the ring, where Stack seized the microphone and happily introduced Corzine.

"We're not going to box," said Corzinewith a playful nod to Stack.A crowd of women pressed up against the edge of the ring whooped loud enough to raise the ears of a bulldogcrouched at ringside.

As Christie had before him, Corzine gathered his own pied piper following as he walked, including volunteers who earlier had tried to present a sign-waving counter show of force to Christie'simprobable troop build-up. Assemblyman Ruben Ramos (D-Hoboken), Assemblywoman Caridad Rodriguez (D-Union City) and other Democrats joined the Corzine crowd.

The one figure in common throughoutboth the Christie and Corzine walks was Stack.

"In the end, I'm a Democrat,"said Stack as Corzine reached one end of the festival, walked a block east and jumped in his waiting SUV. "But I won't make an endorsement until the end of August." 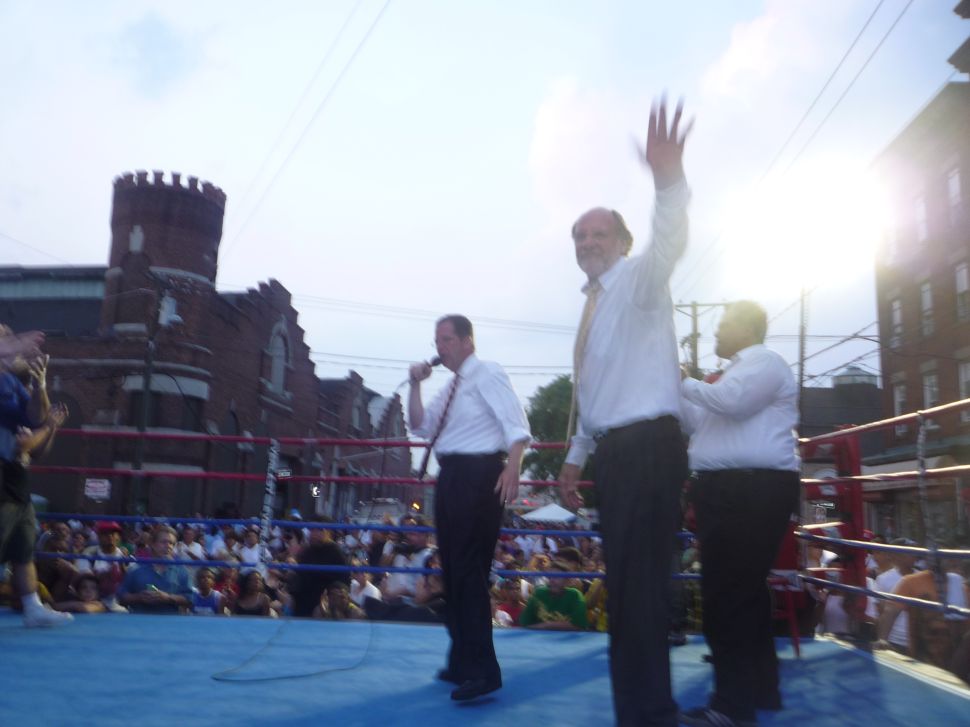