"I just need time," said the 6 ft. 5 O'Leary, 54, sitting in the City Hall conference room here on South Broadway a few blocks away from the Raritan Bay and the waterfront he began rebuilding over two decades ago.

"I can take you on a walk right now and you'll see people giving me the thumbs-up sign and honking their horns at me and encouraging me to run – 100 people have reached out to me telling me to run -but I need time," headded. "Time is on my side when it comes to vetting this thing out."

The bulk ofthe Democrat'sproblem as a candidate derived from a state AttorneyGeneral's investigationof O'Leary's insurance work in addition to an anonymously authored and disseminated 82-page document which targets the veteran mayor's insurance business – the public insurance work he does and has done in the district and in Middlesex County – and an alleged no-show job at the Housing Authority held by his brother.

"It's taken on a life of its own," O'Leary said of thecharges swirling around him and his 23-year political career in this traditionally Polish and Irish residential stronghold with a budget of $13.2 million. "People are out there perpetuating anonymous documents and letters with malicious intent, that I don't have the resources right now to fight. People tell me, 'Jack, you should have a shredder.' Look, I'm not that kind of a guy. I don't own a shredder. I don't want a shredder."

As for the AG's Office, "All they did was come here and ask if I had any insurance work in Perth Amboy," O'Leary said.

This afternoon he was in the process of sending a letter to Middlesex County Democratic Organization Chairman Joe Spicuzzo to formally exit the race when he broke for a conversation with PolitickerNJ.com.

District 19 sources say a lawsuit against South Amboy andO'Leary concerning the development of the Old Memorial Medical Center has also especially absorbedthe mayor'stime; and they also speculate that political enemies ofO'Leary's connected to the hospital troubles are helping to drive the insurance business storyline.

Eager to move up the district totem pole at least since his challenge for the senate seat a decade ago and a convention loss to state Sen. Joe Vitale (D-Woodbridge),O'Leary has continually been hampered by the political realitythat South Amboy, pop. 8,000 -is the smallest town in the 19th District and lacks clout against Woodbridgefor one, but also Perth Amboy, Sayreville and Carteret, which are all stronger power projection platforms.

"I make $8,000 per year for this job – adollar per person and I don't have a city car, expense accounty or city credit card," said the mayor, who two years ago won reelection to his fifth term with 68% of the vote. "You look at our development on the waterfront – it's 300 acres total. We started with public purpose – a middle school, high school, ball parks and public library. Then we partnered with Middlesex County and Sayreville to build a waterfront park."

The most recent development piece along John T. O'Leary Blvd. was a 550-unit residential complex, which faces the Alfred Driscoll Bridge to the west and Perth Amboy and the Outerbridge Crossing to the northeast on the other side of the Raritan Bay.The McKormack Aggregates factory still grinds away on the far side of a dock and cattail meadow, part of a one-time robust waterfront that died in the 1950s after a power plant blow-up, leaving garbage barges and seagulls standing on abandoned dock posts, andegrets picking in the muck ofa rippled-in summer tide on mudflats under rusted manufacturing fixtures.

"That opportunity only comes around once every 30 or 40 years, in some cases," he said. "My thought was I have to step it up for my town. I had a simple issue: when are we going to wake up and be competitive?"

He won his party's nominationon March 18thto run as Assemblyman John Wisniewski's (D-Sayreville) running mate, but once details about O'Leary's public sector insurance work started surfacing and sticking in headlines, including the fact that O'Leary was on the payroll for the company that had Perth Amboy's insurance contract under Vas, party members counseled him to back down and clear his name.

"I do mostly public sector insurance work because I understand it," O'Leary told PolitickerNJ.com. "I can tell you about union contracts, interest arbitration, health benefit contracts and public employee relations. Why not use my expertise to help my business? If that's wrong, then I'm wrong."

The council rejected him, but "They probably ended up doing what I proposed," O'Leary insisted.

Still, party leadersworried aboutthe South Amboy product, a former copand police officer's son who got into insurance in the 1980s,wadinginto a 19th District contest which had Wisniewski feeling unsettling parallels to the 1991 tidal wave that upended Democratic control of the Legislature.

Already put in the position of trying to explain Vas residue to constituents, Wisniewski wanted O'Leary out ofthe race,and privately told him to take a knee, even as Spicuzzo made public statements about a possible replacement for O'Leary: Superior Court Judge Mathias Rodriguez of Perth Amboy.

Then, despite what O'Leary said was hisgentleman's agreement earlier this summer with Wisniewski that he'd announce his departure from the contest in mid-August, the assemblyman in the wake of last month's Corruption Thursday publicly told O'Leary it was time for him to reconsider his candidacy.

That irked O'Leary, who had hoped he would be able to step down with the storylinethat he made the choice on his own.

He's also sorry he won't be able to advance his blue collar jobs platform in Trenton.

"The State of New Jersey is no longer competitive," said the ex-Assembly candidate. "Our region here has lost 50,000 to 60,000 manufacturing jobs over thecourse of the last 30 years. We've got two intermodal ports and we're not competitive. The problems are property taxes, utility costs and insurance costs. We're wheeling in electrical from Ohio and Pennsylvania. People need to start talking about that.I'm a little out of step with the platform of the party. I sound like a Republican. But my whole point is if you create jobs, that creates ratables, which pay for the programs that are near and dear to Democrats, like healthcare and education."

Although stung by the intra-party politics, which he says in part forced him out of the race, O'Leary intends to voteDemocratic on Nov. 3rd.

"I think Democrats give the state the best chance for recovery," said the mayor.

"I received a call from Mayor O'Leary a short time ago," Spicuzzo told PolitickerNJ.com late in the day. "I told him that whenever he resolves his issues he certainly will continue to have a place in the Democratic Party."

"I thanked him for handling this like a gentleman," said O'Leary.

As early as Thursday, the party chairmansaid he wouldset the date for a special convention in which Rodriduez, who retired from his judgeship last week, is expected to compete.

Having officially hung up his robes on Friday, Rodriguezappeared at the Dominican-American festival yesterday in his hometown of Perth Amboy,and spoke like a candidate in this district where well over one fifth of the voting population is Latino.

In spite of all the party upheaval, Democrats runthe 19th by a margin of 2-1, and Republicans Richard Piatkowski of Perth Amboy and Peter Kothari of Woodbridge remain long shots. 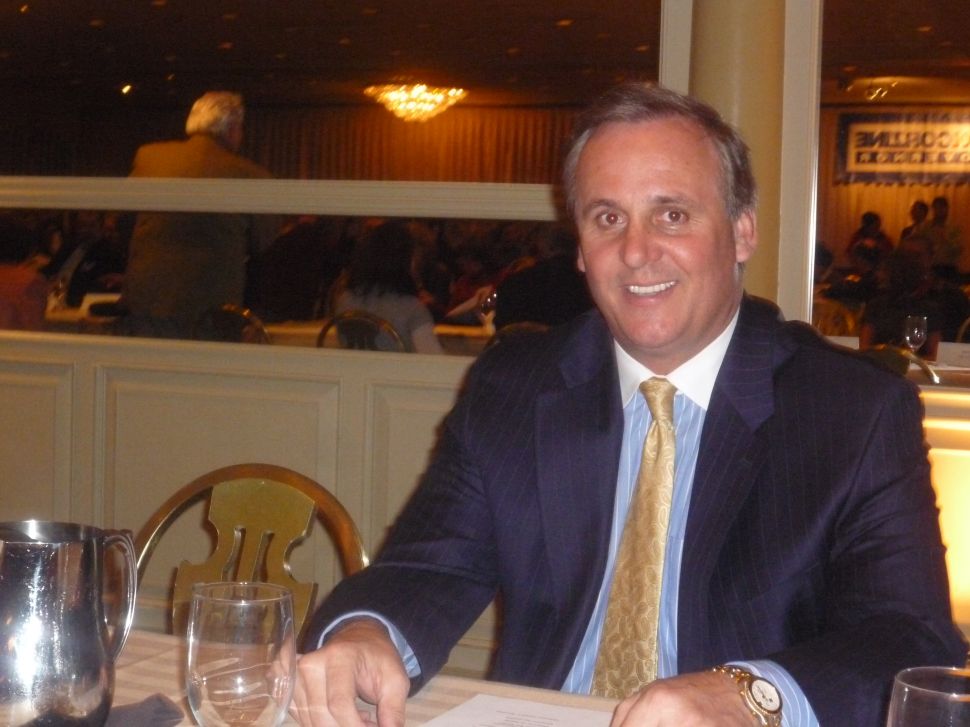