EDISON – It was a parade march that kept coming, and for a brief time Monmouth County Sheriff Kim Guadagno walked at the head of it with some other dignitaries, before shecircled back to the "Chris Christie" float, jumped aboard, and waved atop that perch as she rolled eastward on Oak Tree Road through the same crowd.

"You're double-dipping!" someone cried across the roil of Indian flag wavingup and down the street and the Republican candidate for lieutenant governor laughed in return and rolled onward.

Right behind her in this marchhonoring India's 63rd year of independence from Great Britainrolled the float of Peter Kothari,overhung with signs proclaiming him a"fearless leader who can deliver change that we can believe in" – and one half of the Republican ticket in the 19th District, a mosh of Middlesex towns anchored by Kothari's hometown of Woodbridge.

Kothari's doubled back himself a million times on this road that leadshim again and againto 1990, when the real estate agent moved into his new office on Oak Tree in 1990 and somebody promptly smashed out the windows.

When he went to the police department to complain, he says they shrugged in his face and said: "Call the insurance company."

Kotharidid that – but he also reached back to his student organizing days in India to become more political.

Adisillusioned Democrat who changed his party affiliationin the aftermath of what he callsJim McGreevey'slocal machine damage done to Woodbridge, the 62-year old Kothari believes he has a shot here against Assemblyman John Wisniewski (D-Sayreville) andSouth Amboy Mayor John O'Leary,who's running forthe seat Assemblyman Joe Vas (D-Perth Amboy) will vacate at the end of this year as he wades into a public corruption trial.

Facing his own troubles in his hometown of South Amboy, O'Leary may not survive the week asWisniewski's running mate, a storyline that simply adds to the image of aparty here that, however powerful, is experiencingserious turbulence.

Notwithstanding the presence of Assemblyman Upendra Chivukula (D-Franklin Twp.), who led the parade with Edison Mayor Jun Choi and Councilwoman Toni Ricigliano (who defeated Choi in his Junereelection bid for mayor),Democrats offered little high-level visibility here this afternoon at this high energy event, where thousands lined the street. Four doleful marchers held upright a banner with Gov. Jon Corzine's faceon it, trudging in the exhuast fumes of Kothari and Guadagno's paper mache and red-white-and-blue construction paperclad chariots.

Kothari (who's running with Richard Piatkowski of Perth Amboy)reads it as symbolic.

"What I saw there today was total enthusiasm for (GOP gubernatorial nominee) Chris Christie," said the LD 19challenger."I believe at this point that no one can stop the march by Republicans toward victory in November. This last corruption bust has cemented the win for Chris Christie, I believe. At last year's parade, you had mostly Democrats. But between my organizing and Chris Christie's candidacy, it was like a 360 degree turn for Republicans this year.

"Indian Amerians have views as business people and as people who care about education, ,that are very close to the Republican Party platform," Kothari added. "In my community by now, most people know what corruption has done to the economy. Everybody knows the no-show jobs are dragging us all down."

However discomfited, voters by and large feel far from impaled, according to Monmouth University/Gannett poll director Patrick Murray, who also points out thatmost people don't distinguish between the destructive and corrupt capacitiesof both parties.

"Only 17% of Garden State residents believe that Democrats are inherently more corrupt than Republicans," Murray said in a poll he released today. "In fact, the vast majority (72%) say that Republicans would probably be just as corrupt if they were able to get into power. This sentiment is held by 89% of Democrats, 73% of independents, and even 50% of Republican residents.

“This doesn’t mean that voters are happy about corruption or even that they believe nothing can be done to stop it," Murray added. "It’s just that their primary concerns are pocket-book issues and they don’t necessarily see reducing corruption as the primary way to address their economic woes.”

Kothari has another more daunting obstacle.

On paper, at least, the Democrats look like they could hit the snooze alarm on the 19th.Just lookat the numbers: 44,041 registered Dems and 10,507 Republicans. Moreveor, out of 103,762 total voters,only around 4,319 are Indian Americans, or at least that's what the numbers showed before Kothari started working the district.

"Those numbers are wrong," he said of the latter bracket. "We have close to 11,000 registeredIndian Americansin the district, and we expect that number to rise by 2,000 before the deadline."

If the Democrats dump O'Leary – or if he walks away by his own volition – the party is likely to swap in Judge Mathias Rodriguez, a move that may dovetail snugly with the fact that Latinos make up a fifth of the registered voters in the 19th District.

Kothari insists he is just now revving his candidacy up into fulllown campaign mode. A firebrand who has fought going back nearly 20 years to secure permits for special events in the Indian community. sources say his campaign events are generally packed, and attended by community membersof both major parties appreciative of his longstanding organizing efforts.Next Saturday, he plans to host his own flag raising ceremony in honor of Indian Independence.

"It's not me asking for O'Leary to step down,"Kothari said. "His own party is asking, and his own running mate is asking. I can't judge him. Honestly, I would prefer him to fight. We don't have to ask him to resign. As for Wisniewski, he said (Assemblyman L. Harvey) Smith talked to him about helpinghim with DOT and DEP permits (in a federal corruption complaint against Smith, a Jersey City legislator), so why didn'tWisniewski call law enforcement?"

For the record, Wisniewski said he never believed that Smith in a brief telephone conversation he had with him was doing anything other than his job as a legislator within the the perameters of the law.

"I will say this," Kothari said,"regardless of who the machine on that side puts up to run against us, we are happy because we believe we are fulfilling our civic duty to run, to stand up for justice, and to choose to do something that every American should choose in this greatest country in the world."

But although he looked good today with Guadagno, and his no-jokegrassroots leadership efforts spill enthusiastically into all these towns here around what for him is the always meaningful Oak Tree Road,all of that maynot be enough to go to war and win againsta woundedmajority party in the "Greatest County in the Land." 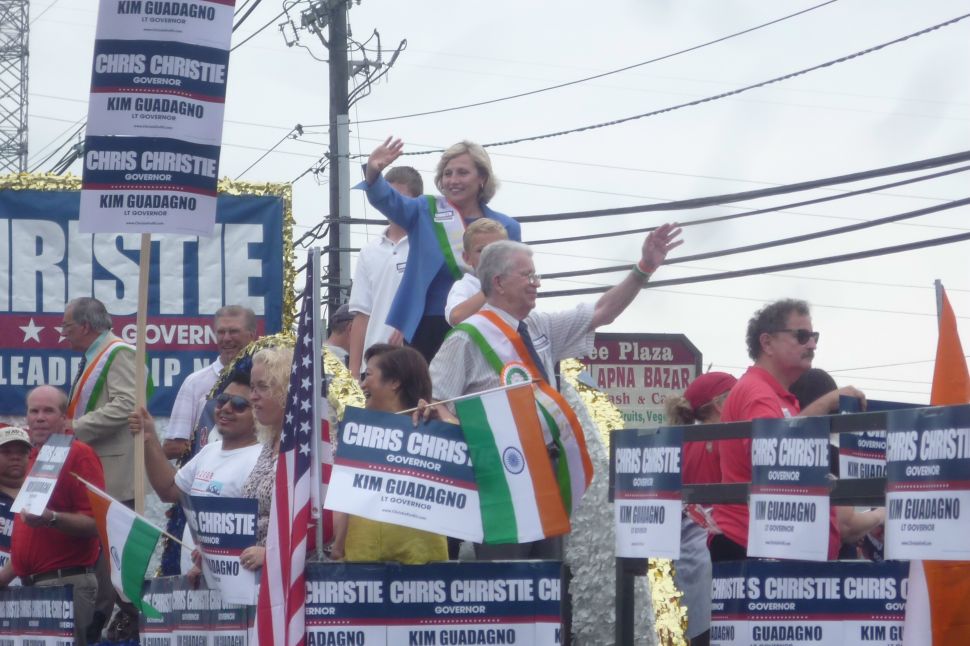