Burlington County Democratic Chairman Rick Perr, caught up in a fundraising scandal, is under intense pressure from South Jersey Democrats to quit his post and is weighing whether to resign today.

“I think Rick needs to make some hard decisions, and he needs to make them today. He needs to do what’s best for the party,” said party activist Chris Fifis, who heads the Lumberton Democrats.

The pressure on Perr came to a head this weekend after the Burlington County Times published emails from Perr and former Burlington County Democratic Treasurer Jeff Meyer with Jack Senechal, the treasurer of the Medford-based New Frontier Committee PAC. The PAC drew scrutiny after it poured money into arrested Hoboken Mayor Peter Cammarano’s campaign earlier this year.

Burlington Democrats are furious because they feel misled by Perr, who had previously denied involvement in running the PAC. Meyer quit earlier this month after his involvement surfaced.

“Think about it, if you were involved and somebody had said that they had nothing to do with this, wouldn’t you be upset?” said Burlington County Democratic Vice-Chair Alice Furia, who will become acting chairwoman if Perr steps down. “But I really can’t say anything about Rick Perr stepping down, stepping up, whatever. You’ll have to Rick Perr about that.”

The New Fronteir PAC donated $15,400 to the Cammarano campaign. Some firms that donated to the PAC worked in Hoboken, including Gluck Walrath, where Perr's wife, Cindy, works as attorney.

Perr took over the party in 2006 and was seen as a rising star in Democratic circles after leading the perennial minority party to win two freeholder seats — positioning them for a shot at control of the board this year — along with the office of the county clerk. He also teaches election law at Rutgers School of Law, Camden.

Update, 10:46am: Furia called back with stronger language against Perr, calling for him to resign.

“I was very sad and disappointed, but I agree with the Republicans’ assessment of who’s to blame, and it’s two individuals: Rick Perr and Jeff Meyer, and it’s time for Rick to resign."

Freeholder Chris Brown has also called on Perr to quit.

“If he doesn’t resign, I think it would reflect negatively on what he’s been saying as a chairman for the last two years about open and honest government, holding people accountable on their actions. He would pretty much commit himself to be a fraud in what he’s purporting to stand for.” 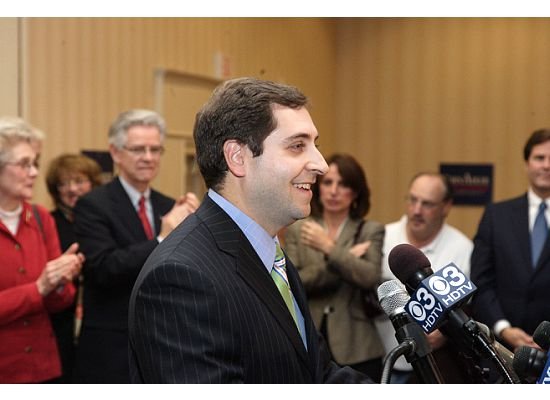