Some Democrats think Assembly Speaker Joseph Roberts (D-Camden) might be interested in moving up to the Senate in January, if Dana Redd wins her race for Mayor of Camden. Roberts has been Speaker for nearly four years, and while he is fully engaged in the campaign to retain the Democratic majority in the lower house, more than a few Democrats sense that he's ready to move on. Redd is an almost certain winner.

Sources say that Louis Greenwald (D-Voorhees), Nellie Pou (D-Paterson), and Sheila Oliver (D-East Orange) are also possible Speaker candidates, although clearly in a third tier category. Even below them on the list are John McKeon (D-West Orange) and Vincent Prieto (D-Secaucus), who fancy themselves as future Speakers, but appear to be just pretenders to the throne. (Prieto's own Assembly seat could be in danger in 2011 if Democrats fail to win the Secaucus mayoral race following the arrest and resignation of Dennis Elwell.)

Part of the race for Speaker will be influenced by the results of the gubernatorial campaign and closely tied to the potential contest for Senate President between incumbent Richard Codey (D-Roseland) and Senate Majority Leader Stephen Sweeney (D-West Deptford).

The conventional wisdom is that Gov. Jon Corzine would back Cryan, who has demonstrated considerably loyalty to the front office since he took over for Watson Coleman as State Chairman in 2006. Cryan, sources say, has done a better job at building relationships within the Democratic caucus that Watson Coleman. The absence of an African American in statewide leadership positions would be a boost for Watson Coleman; the last and only African American to serve as Assembly Speaker was S. Howard Woodson, who left office in 1975. A Corzine loss might help Watson Coleman.

Democrats traditionally seek to have some balance between north and south, and some assurances of a piece of the pie for Essex and Hudson, the two largest delegations for Assembly Democrats. Cryan is considered an honorary member of the Essex delegation – his late father was a popular Assemblyman and Sheriff, and his ties to Essex Democratic leaders runs deep.

Roberts has lots of options, and his re-election as Speaker is secure if he wants it – even if fellow South Jerseyan Sweeney becomes Senate President. If Roberts opts not to succeed Redd (he turned down the Senate seat when Wayne Bryant decides not to seek re-election two years ago), he could do another stint as Speaker and run for the Senate in 2011. Roberts could also seek re-election as Speaker, but leave office before the end of his term — a scenario that has received considerable discussion among Democratic legislators.

A move by Watson Coleman or Cryan could open up additional races for Assembly Majority Leader and for Democratic State Chairman. If Corzine is not re-elected, the contest for Cryan's job could be wide open.

In New Jersey, Assembly Speakers can often come from the unlikeliest of places, and created by a puzzle that has thousands of pieces. After Democrats won control of the Assembly in 2001, the conventional wisdom was that Joseph Doria, a former Speaker who had spent ten years as Minority Leader, would replace Republican Jack Collins. But on Election night, Democrats staged a palace coup and picked Albio Sires (D-West New York), a freshman Assemblyman who had been a Republican just a few years earlier, as the new Speaker. When Sires left in 2006, awaiting a bid for Congress, he was replaced by Roberts, who just six years earlier was so on the outs with Doria that he actually left the Assembly Democratic Caucus and formed his own South Jersey caucus. 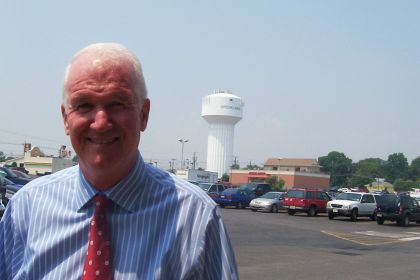