If he decides to run, Torres would be aiming for his third term as mayor.

An ex-Marine and college professor, Jones has served on the city council since 1996 and announced his 2010 citywide candidacy as early as last year.

Assuming Torres runs, theintriguing question is who will be the thirdperson to step forwardto try tomount a credible campaign.

Sixth WardCouncilman Andre Sayegh today told PolitickerNJ.com that he may be the man to find an opening between Torres's Puerto Rican base and Jones's African American base for a play at the affections of the whole city as a new generation unity candidate.

"Iattend every event in the city and at almost every event, peopleencourage me to run," said the 35-year old Sayegh, a native Patersonian and former president of the school board who destroyed his opposition in his 2008 council run in a ward that servesa diverse population in the city.

"These are people from all walks of life who have encouraged me, andI told them in all fairness that it's somethingI would consider," Sayeghsaid of a 2010 mayoral bid."The outpouring is overwhelming, and it's because they see I'm everywhere for everyone."

Of course, there will be considerable jockeying in the coming months.

The rise of the Dominican American Organization of New Jersey means the backing of that organization could prove crucial for a third candidate, and At-Large Councilman Rigo Rodriguez and 5th Ward Councilman Julio Tavarez are battle-tested vote-getters.

As he assesses his opportunities for next year, Sayegh is trying to build an alliance with 2nd Ward Councilman Aslon Goow, formerly a candidate for mayor who controls his northern base among mostly white and Hispanic voters and would balance Sayegh's south Paterson base.

"I anticipate making a final decision in the late fall," Sayegh said. 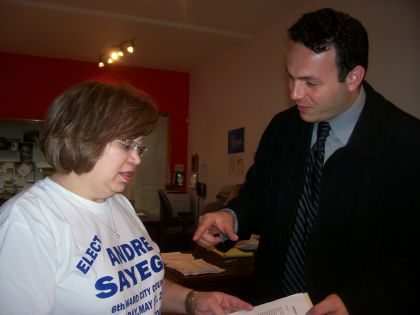