PARSIPPANY – Not to be outdone by other political chieftains who went street level this week with state Sen./Mayor Brian P. Stack, Senate Majority Leader Steve Sweeney (D-Gloucester) gave his blessing to a new community pool in Union City before coming here to GOP gubernatorial candidate Chris Christie's home territory and exhorting Democrats to take the fight to the enemy.

Countering Christie's intrusion into Democratic territory, "We're fighting on Republican turf," Sweeney told a crowd of about 60 Morris County Democrats, some of whom – Diane Weeks of Mendham Twp., for example – describe themselves as Christie's neighbors in this leafy, heavily Republican county.

"This election will be won in the suburban areas – that's where the battle is going to be," said Sweeney, speaking at a picnic in a park next to Lake Parsippany.

A labor pal of Morris County Democratic Committee Chairman Lew Candura's going back 12 years now to his earliest, county level campaigns, Sweeney (who also serves as Gloucester County freeholder director) used his own story as a whiplash on the tables of mostly beleaguered-looking local troops, whose last year's passions for Barack Obama have become this year's dread for the chances of a Democratic incumbent who in mid-summer limps behind Christie by double digits.

Sweeney as a Gloucester County ally of South Jersey Democratic Party leader George Norcross remembers when Republicans controlled 17 of the county's 24 towns, a ratio his party flipped during the iron worker turned politician's time in office.

"It's now 19 towns controlled by Democrats to five for Republicans," Sweeney told the Morris Democrats. "Gloucester County was a Republican county for 300 years. We changed that. It's hand-to-hand combat. It's door-to-door. Now, you know, Jon Corzine is dealing with an economy that wasn't his. But he's on the frontline dealing with this difficult economy. The federal economic recovery program is based on what Corzine did for the state, and by the way, Jon Corzine, never raided the unemployment fund, and he's made sure the vulnerable are well-protected. Disabled. Seniors. My daughter's got Down's syndrome, I feel this personally."

There were some hand claps.

"I think it's helpful," Sweeney told PolitickerNJ.com. "To this point, I see the campaign spending a lot of money but I don't see any real focus. I understand they need to go after Chris. But they also need to talk about things Jon Corzine did. He's not been an unproductive governor."

Notwithstanding Sweeney's identification with Stack – "We're both street guys, and we're both dual office holders; I point to him and tell people, 'That's what a dual office holder can do for a small community'" – the earlier leg of the Senate Majority Leader's northern swing today carried the smack down implications of his ongoing leadership rivalry with Senate President Richard Codey (D-Roseland).

Codey on Tuesday walked with Stack as part of National Night Out, moments after Gov. Corzine walked with the mayor/state senator, who earlier the same evening walked with Christie.

Today was Sweeney's turn to stand on stage with Stack, overlooking Manhattan, where more than 1,000 people turned out for rides, free hot dogs and a dip in the new, state-funded pool.

"I was proud to be there for him," said Sweeney. "You know, you have caretakers. And then you have people like Brian Stack who have the vision to see old buildings or an unused area and turn it all into a wonderful park and recreational facility for the people."

Sweeney today told PolitickerNJ.com that if he challenges Codey he will not try to get to 21 votes by trying to build a coalition with Republicans beyond his own caucus.

He said he needs a majority of Democrats. Period.

"I would not do it without majority Democrat support," Sweeney said.

There are other factors – the future of South Jersey-based Assembly Speaker Joe Roberts (D-Camden), for example. If Roberts retires and a northern assembly person makes a move for Roberts's vacated seat, Sweeney has the added incentive of going after the northern-based Codey in the name of geographic fairness.

"I get along well with Dick Codey," Sweeney said. "But Dick's had 12 years in leadership – Senate Minority leader, and then Senate President. You know, it used to be four years and you move on."

The Candura personal connection went deeper, it seemed, than Sweeney's desire to strategically feel out candidates who might challenge state Sen. Anthony Bucco (R-Boonton) or Sen. Joseph Pennacchio (R-Montville) in 2011.

Afterthe senator'sspeech to the rank and file, bereft of a senator since the last decade ouster of Gordon MacInnes, Candura bucked up the crowd when he said, "Let's have a motion to adopt Sen. Sweeney as our county senator. All in favor?"

"It's unanimous," the chairman announced. 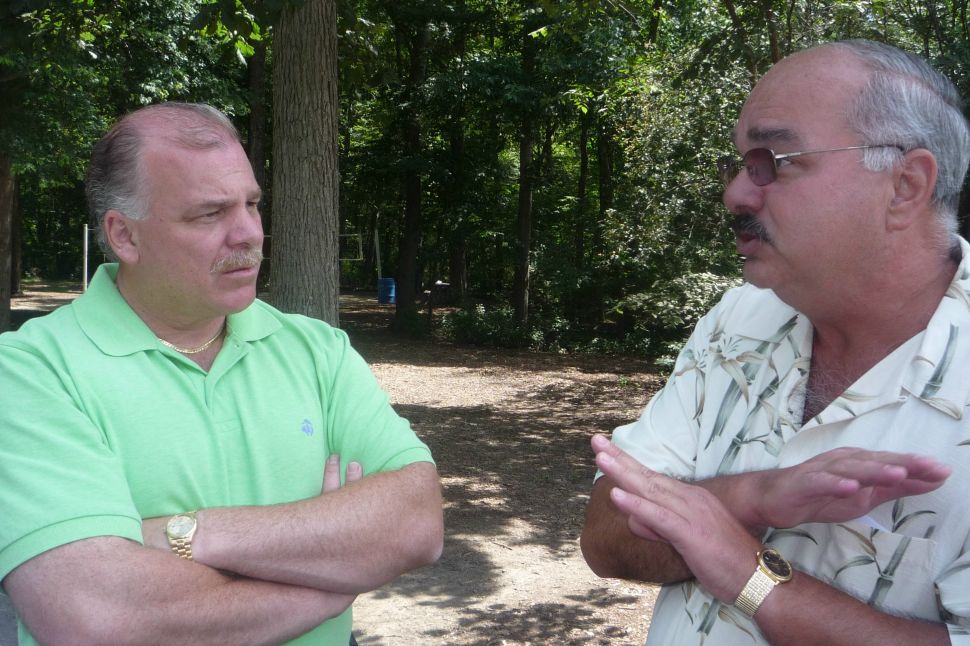