"There are always going to be some knuckleheads out there," said Paterson At-Large Councilman Rigo Rodriguez.

Itgot rough once Weinberg climbed into a carand departed after completing the parade on foot with Assemblywoman Annette Quijano (D-Elizabeth), and Trenton Councilman Manny Segura.

Welcomed by MayorChris Bollwage, politiciansstood onstage in front of City Hall asSegura railed against Christie in front of a crowd sprinkled with organizers waving Corzine/Weinberg signs.

Both he and Christie had also committed to appearances in Jersey City at the Puerto Rican Day Parade, and so surrogates like Segura turned up the volume.

"I think the way he said it, there was a racist element to it," said Segura. "WhatMr. Christiedoesn't understand is Sonia Sotomayor is – to us – a Jackie Robinson figure."

Following the GOP primary and his initial rejection of the judge, Christie advocated for Sotomayor's confirmation, and last Thursday celebrated the ceremonial swearing-in of Passaic County's Camelia Valdes, the first Dominican lead prosecutor in America.

Segura, who hasn't yet reached a final decision about whether he will run for mayor of Trenton next year, also criticizedChristie's running mate, Monmouth County Sheriff Kim Guadagno.

"His running mate – this sheriff – is totallyagainst immigration," said Segura to jeers.

It was difficult to see but one man climbing to his feet afew stepsfrom the Jose Marti monument, big-limbed and bald and shirtless clearly looked to haveabsorbed the worst of whatever happened.

The crowdbroke apartas Elizabeth Police Department SUVs drove onto the grass and sidewalk,and the man, blood streaming from his mouth, staggered away from the area.

Heencountered a cop on the other side of the road, who gave him a face full of mace then twisted his arms behind his backin handcuffs and forced him tohis knees on the curb. Thearresting officer struck the man's midsection before he collapsed, belly down, on the street.

His face was bloody, and after the cops washed out his eyes with bottles of , he started crying. When he tried to sit up, his shorts slid, and there was laughter as the man wailed to the cops for help and struggled in vain with his handcuffed hands to cover himself.

No one helped, until a woman who appeared to be related to him arrived and cleaned his face.

Police pursued a redcar that abruptly left the scene after the fight.

"He had a deal to pay for this other guy's car, and he never paid," a man told an inquiring officer.

The music cranked. Native dancers in grass skirts moved in with drums sounding but for more than a few people who saw the beating up close and faced the ambulance, not the rally stage,when they loaded the handcuffed man aboard, something was gone from the day.

"It happened with Wilda Diaz's campaign in Perth Amboy,"the councilmansaid. "That was really the turning point. You saw Puerto Ricans and Dominicans coming together after being divided for many years to defeat Joe Vas."

A Puerto Rican, Quijano wore a sashdesignating her "godmother" of the Dominican parade.

"I'm proud to be here and proud of the honor," said the freshman assemblywoman, who spoke to PolitickerNJ.com before the fight. 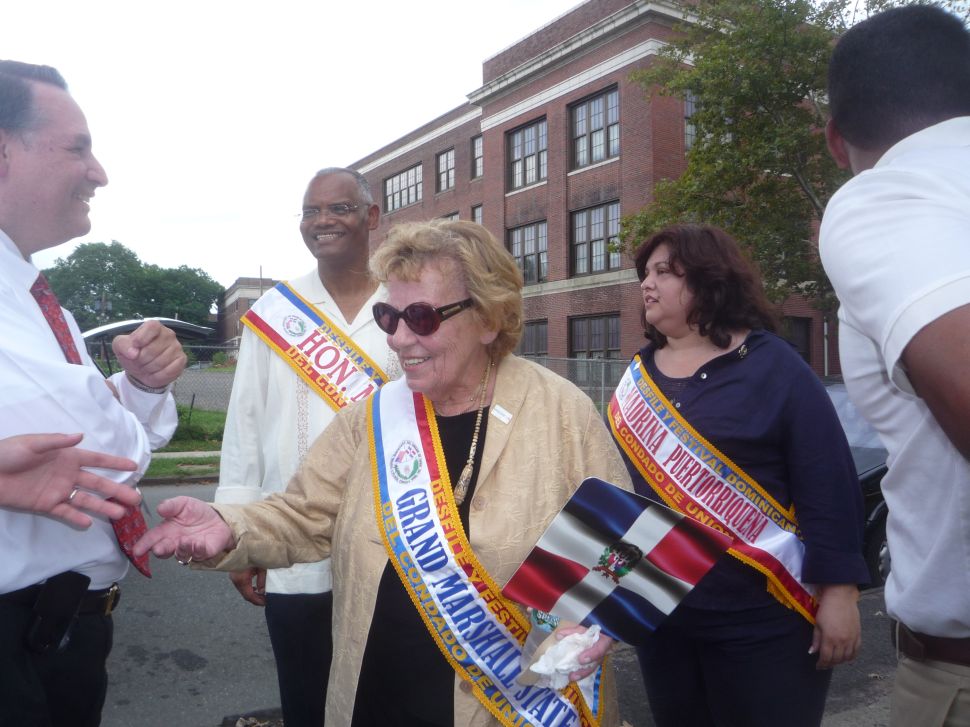