“I know some people in New Jersey think it’s an uphill battle in this state for a Republican,” said Pawlenty. “In 1984, 49 of 50 states voted for Ronald Reagan. One did not. Any guess as to which one that would be?”

That state was, of course, Minnesota. But while Pawlenty’s state may not be as deep blue as New Jersey has been in recent years, he gave off a long list of famous liberals who hail from there: Eugene McCarthy, Hubert Humphrey, Walter Mondale, Paul Wellstone and Al Franken.

“So as people talk about states where it leans a little left – a little to the left of center – I have some experience,” said Pawlenty, who succeeded the independent Jesse Ventura in 2003 and is said to be nursing presidential ambitions for 2012.

Pawlenty, 49, made the remarks during a short speech to about 200 Republican faithful at Bergen County Republican Headquarters after helping Christie raise money at a $500 a head luncheon at the Closter home of businessman Munr Kazmir.

In July, Christie rejected a hypothetical visit from Sarah Palin, saying he wanted to focus on local issues. He did not show up at former Republican Pennsylvania Senator Rick Santorum’s visit to Cape May County last month. But Christie said that Pawlenty is different, since he inherited a dire fiscal situation in Minnesota, which faced a $4.5 billion deficit when he took office.

Christie said he and his wife met Pawlenty at a Republican National Committee event in Wyoming in early August.

“The experience in Minnesota just seemed so analogous to our experience here, that when he offered to come in I thought he’d have something valuable to say,” he said.

Some local politicos recognized that this visit was as much about Pawlenty’s political ambition as Christie’s.

“I think you’ll see any number of named Republicans from around the country coming in,” said state Sen. Gerald Cardinale (R-Demarest). “Nationally Bergen County is important for anyone who has any other kind of ambitions, and this race is important to the Republican Party nationally, so they’re going to support this.”

Cardinale gave an honest assessment of why Pawlenty is preferable to Palin, who Democrats hope to associate with Christie.

“If Karl Marx were alive, do you think Corzine would bring him in even though Corzine agrees with many of Karl Marx’s philosophical bases?” he said. “The practical political reality is anybody who’s running for office, whether they’re Republican, Democrat or anything else, are going to bring to the fray those who would give them the ability to emphasize their message that they want. Pawlenty is reputed to be a very effective Governor in a state that is not 100% Republican – very similar to the situation we have in New Jersey.”

Another way they’re analogous: Christie and Corzine have to contend with independent Christopher Daggett, who’s currently polling at 9%. In both of his gubernatorial campaigns, Pawlenty had to face viable independent challengers who wound up with a significant portion of the vote. And Daggett has hired Minnesota native Bill Hillsman as an advertising consultant.

Although Daggett does not see himself as a spoiler, much of the talk about his candidacy in political circles is whether he’ll take more votes from Christie or Corzine. Pawlenty, for his part, said he didn’t know whether it helped or hurt him.

“That depends on who you listen to. There’s a dispute about that,” he said. “It can cut both ways – sometimes in surprising ways.” 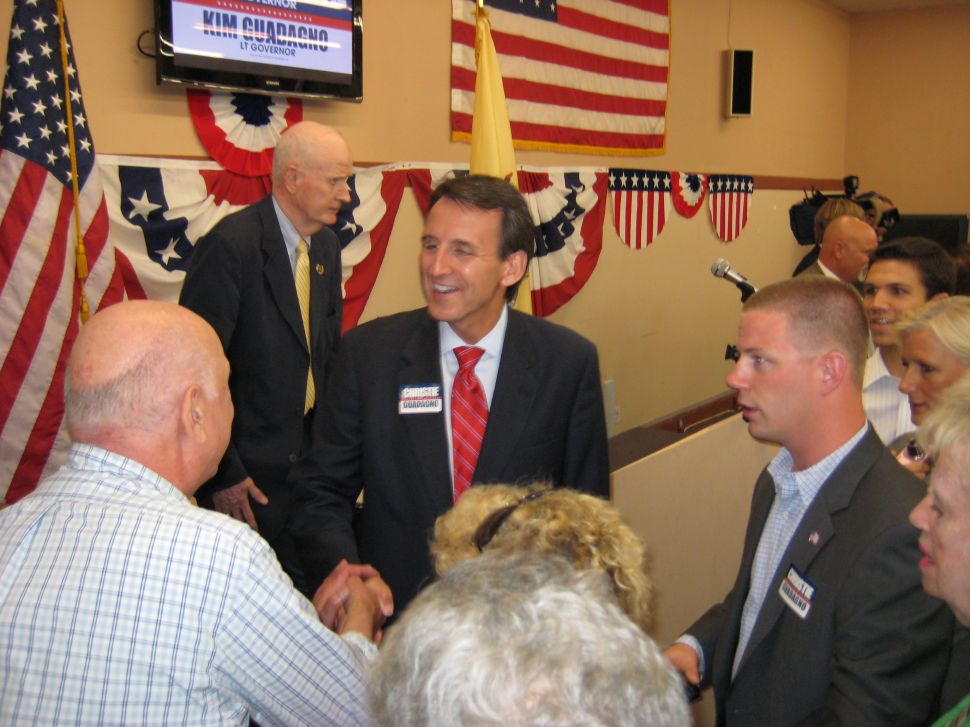