But he still believes Codey will prevail and hold onto his leadership chair against the South Jersey lawmaker whose close ties to South Jersey Democratic Leader George Norcross III worry Rice.

"I'm with Codey," said the veteran senator. "We're together because, agree or disagree, we're about people. You read the papers and you see the headlines. You've got these networks pushing, pushing, pushing – people pushing behind the scenes who aren't elected to anything. Scary. Codey's always had an independence about him. If Sweeney's senate president, no one's going to be able to breathe. Anyone who's honest with themselves knows that. I've been there a long time, and it's starting to stink in Trenton."

Rice said other members of the Legislative Black Caucus who would have a vote in the Codey-Sweeney contest – namely state Sen. Nia Gill (D-Montclair) and state Sen. Sandra Cunningham (D-Jersey City)- personally told him in the past that they are with Codey.

"Codey has been good to our caucus members and in the end I don't see our members divorcing themselves from Codey," Rice said. "There's a big difference between Codey's world and relationships, and Sweeney's world."

Regardingthe potential for Assemblywoman Sheila Oliver (D-East Orange) to play Essex County counterweight in a lower house leadership role to Sweeney in the event the South Jersey lawmaker dethrones Essex County's own Codey,Rice said, "That's a bunch of hogwash. I've been around too long to buy that. The only reason they're throwing her name out there is to mess with Bonnie (Assembly Majority Leader Bonnie Watson Coleman (D-Ewing), who's a short list candidate for speaker)."

"While the mayor's fundraisingout of state with histweeting buddies, tweeting about crime, you see the realities of a police director who's totally frustrated in the Sundancemovie, 'Brick City,'" Rice said. "The impact of that series is negative on the mayor and on the governor. But the fact is, when you consider the other side, (Chris) Christie, who talks about nothing and has no message, Corzine is the best choice, and the best opportunity." 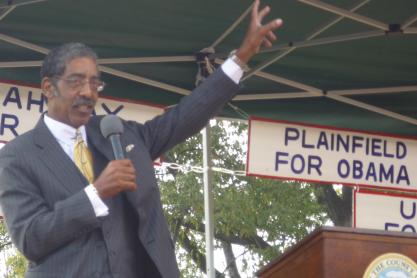