ORANGE – Jittery GOPsources who want Republican gubernatorial candidate Chris Christie to present a different and more specific plan for property tax relief may not get what they want.

That's because Christie says his plan is specific right now, as it is, and doesnot require fine-tuning or what would amount to an 11th-hour overhaul in the face of a Quinnipiac University poll released Wednesday, which shows Christie's lead shrinking to four points over incumbent Democratic Gov.Jon Corzine.

"I've laid out what I've laid out," Christie told reporters atSt. MatthewAME Church following his presentation to members of the Black Ministers Council of New Jersey, the first of the three gubernatorial candidates to appear here. "Jon Corzine and (independent candidate) Chris Daggett want to raise your taxes. I won't. I want to decrease spending and decrease taxes."

Earlier, when he addressed the crowd of about 60 people in the church, Christie promised as governor to spendto the rate of inflation – no more; something that governors from both parties going back to Christie Todd Whitman have not done, he said. During the governorships of Corzine, Gov. Richard Codey and Gov. James McGreevey, New Jerseyans endured 110 tax increases, said the candidate.

"We will resolve not to raise spending above the rate of inflation," said Christie, who charged Corzine with failing to manage a state worker force that has racked upexorbitant overtime pay, inthe candidate'sview.

Shackled to the New Jersey Education Association and state workers' unions, Corzine can't negotiate for taxpayers, saidChristie. Arguing that he doesn't have their support going into Trenton as it is,Christie said hewouldn't feel any compunction about getting more realistic, taxpayer-centered concessions from those groups.

"We can manage this government better," said the former U.S. Attorney, who added that Corzine's friendliness withthe teachers' union also prevents him from backingeducation alternatives like vouchers and charterschools.

Christie projected confidence in the face ofWednesday's Quinnipiac numbers, which show him at 43% to Corzine's 39%, a tighteningbysix pointsfromthe same poll one month ago.

"I'm happy I'm winning," he said. "The governor is still under 40 percent. I don't think they're breaking open any champagne at the Corzine headquarters. The Christie campaign feels very good right now. We wereoutspent 11-1 this summer and despite all his negative campaigning, the governor is still losing."

Eclipsed along with Corzine and Daggett today by the Senate leadership fight between Senate President Richard Codey (D-Roseland) and Senate Majority Leader Steve Sweeney (D-West Deptford), Christie said in response to a question about that Democratic Party contest, "Do you think for a second that I'm getting into that Dick Codey/Steve Sweeney fight? Gallant try." 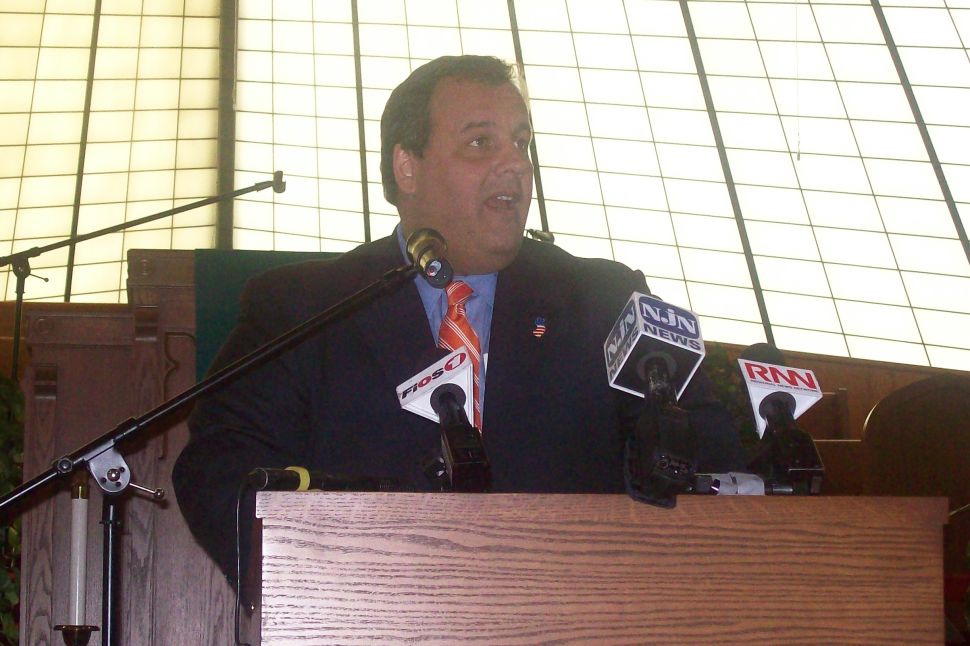