Thesetwo Democratic Party leaderscome from different places, and not justgeographically.

Ironworker Sweeney operates within the structure of the same South Jersey organization developed in part by Roberts and South Jersey Democratic Leader George Norcross III, which numbers18 legislators strong. Roberts's departure at the end of the year places the burden on Sweeney – the next highest ranked South Jersey lawmaker – to wrest control of the upper house from the North Jersey-based Codey.

A insurance broker by trade with35 years of legislative experience, Codey survives because of his ability to embody the solitary lawmaker who keeps his own counsel, who doesn't get bullied, and who relies on public appeal developed during his service as interim governor from 2004-2006 to counter the perception of statewide rule by machine politics.

If Sweeney's status as a dual office holder (he serves as freeholder director of Gloucester County in addition to senator) and machine product weaken his ability to stand convincingly on the Democratic Party's new era pedestal, Codey's image suffers as the former holder of multiple public sector insurance contracts, which made him a bundle of money during the course of his career in public service.

"Codey's worst nightmare," Norcross was heard to proclaim on the day Roberts made his announcement asNorcross observed early round play at the U.S. Open Tennis tournament.

But even as South Jersey confidently offers Norcross' brother Donald as the successor to Roberts and privately exultsin the belief that Sweeney has enough support in his caucus to at last vanquish Codey, the Senate President's allies trust that their champion has too much cunning for Sweeney and Norcross, himself an insurance executive and holder of multiple government contracts.

"Codey's always most dangerous when his back's to the wall," one told PolitickerNJ.com.

"I have the votes," Codey has said in the recent past, "and if it's close, there's always a careful reading of Donald Trump's 'Art of the Deal' to consider."

Although both men have publicly dismissed their budding rivalry as little more than Statehouse gossip, theirintrigues – and the larger dimensions of Codey's troubles with Norcross and the South Jersey Democratic Organization – haverepeatedly bubbled to the surface.

Sweeney famously committed Democratic Party sacrilege when he went after public service sector union workers in 2006, targeting cuts to salaries and benefits totaling 15% and clearly establishing a point of contrastbetween himself andCodey, the unions' longtime apologist and protector.

Codey couldn't believe O'Toole's chutzpah in prevailing on Sweeney ally Madden to craft legislation which in the Senate President's opinion had no other purpose than to blitzkrieg Codey, complete with the furrowed brow presence of Weinberg.

Although they've never been cloakroom chums, Weinberg thought enough of Codey to proclaim, "He holds many progressive views that are consistent with Barack Obama's," when Codey in 2008emerged fromthe John Edwards wilderness to endorse the presidential candidate whom Weinberg had endorsed earlier in the primary process.

Now she was standingbeside Madden and O'Toole.

It infuriated Codey, who generally counted on Weinberg's support, not bill by bill to be sure, where Weinberg's reform efforts generally played havoc with Codey's steady-as-she-goes approach. But the Bergen anti-establishment senator's natural distrustof party machines meant Codey could at least present himself as the alternative to the all-out – and this was a term Codey himself used on occasion -"metastasization of the Norcross cancer" and, in the eyes of someone likeWeinberg, remain confident that she saw his old school independence as the lesser of two evils when it came to South Jersey.

He kept in play for as long as he could, for example, the idea that someone like state Sen. Jim Whelan (D-Atlantic City), like Codey an aging jock and Irishman, could be persuaded to back Codey for the senate presidency. There was that 2007 senate race, after all.

Whelan's handlers dismissed this as "Codey spin," and said Whelan was going to defeat McCullough regardless of what Codey did.

Notwithstanding his kinship with Whelan and playful banter with state Sen. Dana Redd (D-Camden), Codey resigned himself to a South Jersey united front that would vote against him: state Sen. Jeff Van Drew (D-Cape May), Madden, state Sen. Jim Beach (D-Cherry Hill), Redd, Whelan, and of course, Sweeney himself.

Sweeney privately tells people that he has the votes in his caucus, no problem.

If South Jersey runs plays as a well-oiled offensive unit, Roberts wouldn't have retired from the lower house without South Jersey's confidence that Sweeney could succeed him in the lead role in the upper house, insiders argue.

As for his dual-office holding status, "Mypolitical enemiesalways mention that first because they want to make me appear more menacing," said Sweeney, "but the fact is I donate my freeholder salary to charity."

Still, after the six sure votes for Sweeney, there is too much unsettled territory among the remaining 17 Democratic senators, with the likes of state Sen. Nia Gill (D-Montclair), state Sen. Brian Stack (D-Union City), Sarlo and, most notably, Union County power broker Sen. Ray Lesniak (D-Elizabeth), not yet on the public record backing either Sweeney or Codey.

"I'm never locked in – until I'm locked in," said Lesniak, who admitted that Codey is always hard to beat.

"You're looking at a senate president who enjoys great popularity with the public and who served the state admirably as governor," Lesniak said of Codey, who has told Democrats he would like two more years as Senate President.

Lesniak himself wouldn't rule out accepting the seat himself if it added up that way.

If the Democrats can't decide who to support, then the matter goes to the full senate, where Republicans will vote.

Codeybelieves he canprevail here, mostly by alerting his colleagues to the implications of a statewide South Jersey world.

Ultimately, whether Sweeney can summon the votes among Republicans depends mightily on the efforts – and reputation – of his chief GOP advocate, O'Toole.

Kean supporters worry about O'Toole's proximity to that fine political line between Democratic and Republican parties, and don't want to become an unwitting instrument in some kind of Norcross-Adubato design. But some of Codey's allies argue that the main reason O'Toole wants to work with Sweeney rather than Codey is because the Republicans aretired of getting schooled, and Sweeney lacks Codey's killer political instincts and panache for getting his own way.

"People are tired of going in to Dick Codey and havinghim negotiate them down until they have nothing left and he has everything," O'Toole said last year.

But Codey can capitalize on the additional unease of Republicans in South Jersey border counties like Burlington, Monmouth and Ocean, who already feel as though they're on the front lines of a civil war and don't want Norcross and his allies empowered.

For all the shared intrigue and quest for political power, Codey and Sweeney also have in common the impact of illness on immediate family, and a shared legislative motivation to ease the burdens on those facing specific challenges.

Codey's wife has acknowledged battling depression, while Sweeney's daughter has Down's Syndrome. In Trenton, each man has sought to make his mark in both those areas of public concern.

Now in the thick of a gubernatorial election in which their incumbent Democratic governor is running behind Republican challenger Chris Christie, most lawmakers say publicly they won't consider Codey versus Sweeney until after the general election when the governing body reorganizes before the New Year.

But this Codey versus Sweeney/Norcross rivalry has been building, and the sides plotting and shifting, for years. 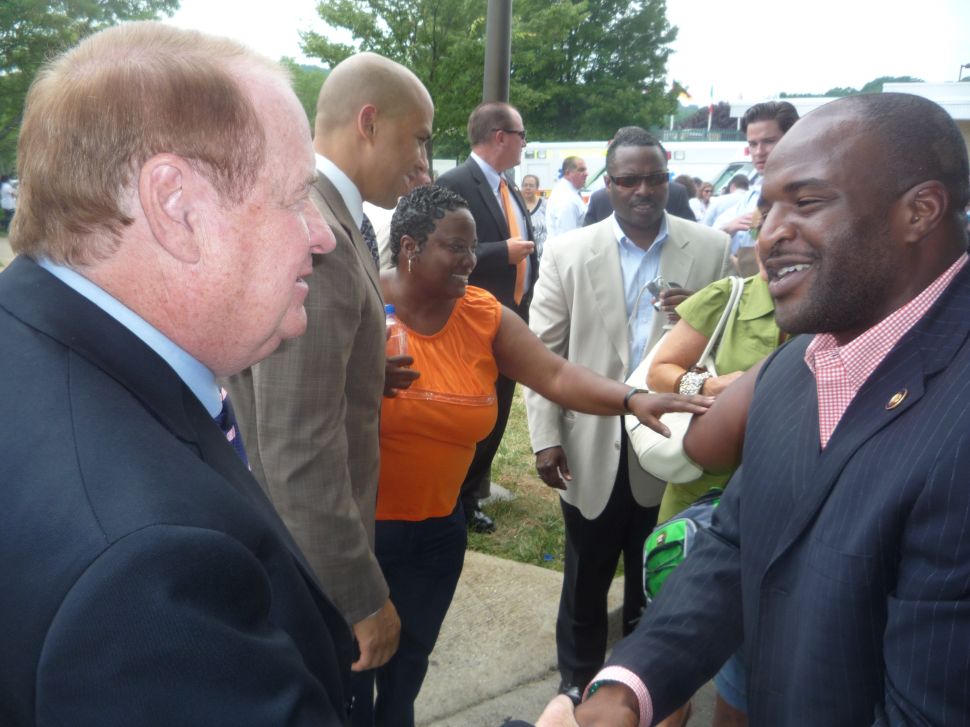