Trying to run up the middle between two main party adversaries blasting each other on driving records, mammograms and Wall Street ties, Independent candidate Chris Daggett today unveiled his property tax relief plan, which includesextending the state's existing 7% sales tax to agreater range of personal, professional and household services while adding what Daggett said would be $3.9 billion in revenue.

Generally regarded as a no-hoper for victory, Daggett, who convened a Trenton press conference to outline the plan,saidrestructuring the state's tax system would translate intoa 25% property tax cut to all New Jersey homeowners to a maximum of $2,500. The plan lowers the corporate income tax from 9.36 to 7 percent and caps municipal, county and school district budgets based on the Consumer Price Index (CPI).

"If a budget exceeds the cap, homeowners in the town will not be eligible for the new property tax credit, a provision that will serve as a hammer to control government spending," said Daggett, who two days before he's scheduled to face Gov. Jon Corzine and Republican Chris Christie in an NJN debate,took credit as the "only candidate in the race to propose a specific property tax reduction plan."

"This is a clear plan to reduce property taxes, whichforces the other two candidates to addressthe issue, and he is the first peron to lay down the gauntlet here" said Murray, who noted the timing in front of the NJN contest."IfCorzine andChristie gang up on Daggett, they might play onone of the things we've seen in our polling, which is that peooplelike to see how these cuts are going to be maderather thanshiftingthe tax from property to sales."

However, Murray said on the upside for Daggett is data from his polling that shows voters responding favorably to straight tax credit.

"Daggett could potentially draw votes away from both candidates," said Murray. "Christie opened the door for Daggett by not talking about it. Because Christie hasn't talked about property taxes, that opened the door for Corzine to talk about mammograms."

Now Daggett – polling at just 5% ina Sept. 13th Monmouth University poll, compared to 47% for Christie and 39% for Corzine – is forcing the issue.

Acknowledging New Jersey's overreliance on property taxes,the independent'sproposal would realign the state’s "four major sources of state and local revenue along the lines of recommendations of academic experts and most influential state organizations. It also provides more stability and balance to a tax system which has changed dramatically as the nation and state have largely shifted from a manufacturing economy to a service-based economy."

The$1.6 billion spent in this year’s budget for property tax relief programs—including homestead rebates, the senior citizen property tax freeze and the income tax write-off for property taxes—would be folded into a property tax credit that would be deducted directly from homeowners’ property tax bills, as proposed by the Legislature’s Property Tax Study Commission three years ago, said Daggett.

"The $3.9 billion inextended sales tax revenue would be combined with the $1.6 billion from existing property relief programs to fund the $4 billion property tax cut, a $620 million reduction in the income tax surcharge, a $750 million drop in corporate income taxes and a permanent source of funding for open space to cut future debt," said the candidate.

"New Jersey’s tax system is broken. Democrats and Republicans keep trying to deal with recurring deficits with one-shot gimmicks and borrowing that puts the state further in debt,’’ he added. "We need new thinking in Trenton to solve our state’s fiscal crisis. Only an independent is capable of changing the system.’’

"The cap also will cut the state’s projected $30 billion pension deficit, which is based on actuarial calculations that assume the continuation of annual salary increases of 4.5 percent to 5.5 percent for public employees; pensions are based upon the three highest years of salary, so if employees retire at lower salary levels, pension costs are reduced," he said. "A key element of the tax overhaul is designed to make New Jersey more competitive with other states by reducing corporate and income tax rates. The plan funds the reduction of the top income tax rate from the current 10.75 percent to 8.97 percent, which drops New Jersey’s top rate from third-highest to seventh-highest in the nation. The 10.25 percent and 8 percent brackets also return to the previous levels of 8.97 percent on income over $500,000 and 6.37 percent over $75,000." 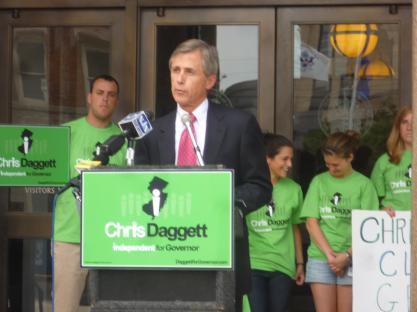