But the GOPtag teamtrying to compete in this 2-1 Democratic-leaning district havereceived little press attention as they run their property tax relief campaign and fail to capture the attention of a depleted press corps focused mainly on the big ticket gubernatorial election.

The Schaer-Scalera campaign is ready to launch their first wave television ads – with former Gov. Richard Codey (D-Roseland) in a starring role,days afterPio Costa and Diorio sat in the living room of Rico Benigno – a Goliath and David juxtaposition 36 days before Nov. 3rd.

"We want to dignifyour pledge to taxpayers – no additional tax burden," said Pio Costa, a businessman who has resided in Nutley since 2002.

"I worked in the private sector and learned sound business practices, but I don't see that in Trenton right now," said Diorio, a member of the Board of Educationand alternate on the Board of Adjustment in his hometown.

Sitting next to each other, the candidates simultaneously signed pledges not to raise taxes.

They don't talk about campaign money – how much they've raised will come out on Oct. 5th, but this same pair came close to beating Schaer and Scalera two years ago. The incumbent Democrats argued in the aftermath of that close election that they didn't really campaign, after all – and now they're armed with big bucks to turn back their Republican rivals.

This time will be different.

But Pio Costa and Diorio also believe the campaign season has changed -in a way that benefits them, not the incumbents.

""The 2007 electorate was not engaged," said Pio Costa. "Voters were not that concerned with what was going on in politics then, but this is a gubernatorial election year. I was sitting in a restaurant the other night with my fiance. Everyone around us was talking about politics."

If Pio Costa and Diorio are eager to highlight their alliance withGOP gubernatorial candidate Chris Christie and highlight their rivals' "aye" votes on Corzine's state budgets, the incumbentsare not eager tohave themselvesseen in campaign literature with Corzine.

"If their campaign is tyingus to Corzine and it's guilt by association, that's politics of the 1920s and 30s," said Scalera-Schaer campaign spokesman Tony Bawidamann."Jon Corzine's numbers are not DickCodey'sor Obama's, but we expect him to win here.In any case, 'We're like Corzine:' that's not a message that solves the state's problems."

Responding to what they say was a wave of no-traction Diorio/Pio Costa press releases lambasting their record, Schaer and Scalera launched a just-in-case counter-offensive consisting of two glossies, singling out Diorio's attendance record on the Board of Adjustment.

"I'm an alternate on the Board of Adjustment," Diorio said with a roll of his eyes. "I'm not required to attend those meetings. Look, voters don't want to hear about that. They're talking about joblessness, real estate taxes, COAH, EnCap and Xanadu."

Benigno, a Democrat who voted for President Barack Obama, who now intends to vote for Christie over Corzine, said, "I was born in this area, this my state and I don't want to move out of my state. What do I want to do in Florida? But I can't afford the taxes. I want to livein New Jersey,and I want to die here.

"In another 25 years," he added with a grin that cracked up Diorio and Pio Costa.

The senior citizen didn't make it under the $75,000 property tax rebate threshold.

"I can't get my widescreen color television this year – I was all set to get it, and I can't afford it now,"Benigno said.

Running out of the Nutley base portion of the 36th District, Pio Costa said he has received positive feedback.

"People asked me, 'You're running against Fred? Then you have my vote,'" saidthe candidate. "His district has lost money to the cites, and people I've talked to know that."

But Scalera as the incumbent Democrat notes his friendship and what he describes as a valued political relationship with Nutley Republicans like Mayor Joanne Cocchiola and Commissioner Mauro Tucci.

"We'vemade attempts to reach out to them (Cocchiola and Tucci) without much reply,"admitted Pio Costa, adding hopefully, "Nutley has changed a bit in two years, since the 2007 election. There are a lot of new, young families in town."

But if the money-messaging factor plays against them right now, the GOP here say they will continue to work the ground, trusting in an up swell from the suburbs of those purveyors of property tax backlash like Benigno to knock out Schaer and Scalera.

"We're playing in the whole district," Diorio said. "I was born in Passaic. What a great town. It was the golden nugget of the area. It's changed, but it's still a vibrant city." 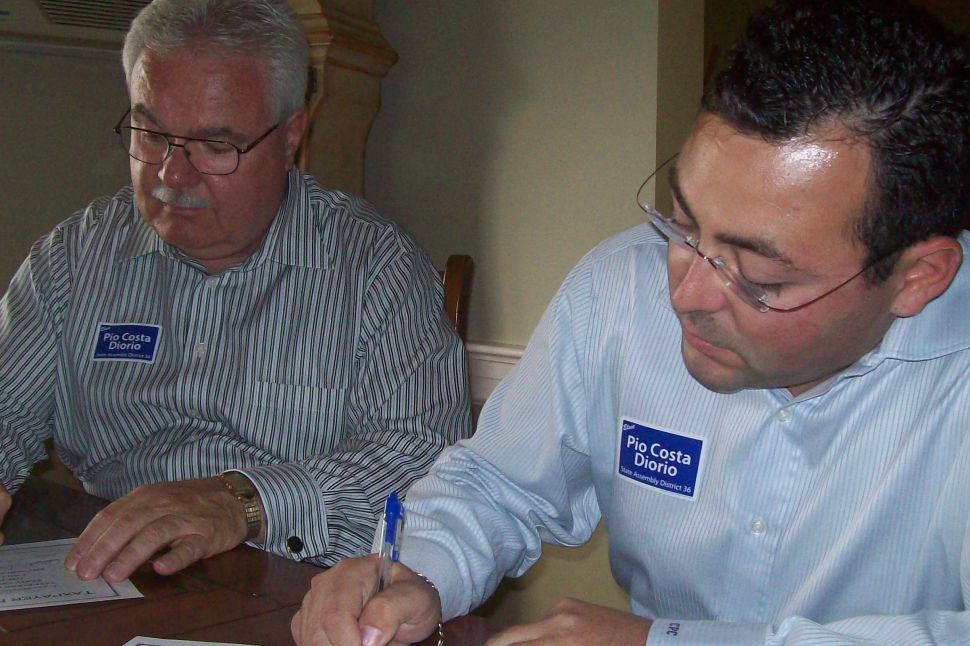