NORTH PLAINFIELD -Marty Marks, former mayor of Scotch Plains and an Assembly candidate in the 22nd Legislative District, has seen polling in Union County that puts that much more spring in the stride of he and his running mate, businessman Bo Vastine, candidates who raised more than $25,000 at a well-attended fundraiserSept. 12that Marks' home.

TheRepublican running matesare challenging longtime incumbent Assemblyman Jerry Green (D-Plainfield) and Green's running mate, former two-time Congressional candidate Assemblywoman Linda Stender (D-Fanwood), in a 2-1 Democratic district where Green and Stender will have more money tofight theirchallengers and who in normal circumstances shouldn't have to break a sweat-but where an intensely contested gubernatorial race at the top-of-the-ticket heartens the GOP opposition.

"People can't afford to live here," the candidate added."Unemployment is at ten percent. It's the economy – and let's face it, the corruption arrests have become an embarrassment."

Marks asserts that most people don't knowwhat an assemblyperson is, let alone who serves them in that capacity, butaverage votersknow the implications of Corzine versus Christie, and "at a certain point in this business, you are caught in the current of what happens above."

"If Linda Stender wants to dwell on abortion and stem cells, she does so at her own peril," said Marks, who anticipates the incumbents' invocation of his own failed 2008 congressional bid, when Marks ran as the pro-lifeconservative in the Republican Primary. "Social issues are important, but what's number one are financial issues."

Over the summer,Republican gubernatorial candidate Chris Christie campaigned with Marks and Vastine in Plainfield, the district's urban core and Green's hometown in what amounted to aGOP barge-through whatDemocratsjealously guard as their home turf.

"Jerry Green showed up and said it's all George Bush's fault, which is yesterday's news," said Marks, who nonetheless with his running mate faces the particular political challenge of getting over Green's Plainfield machine in a year in which incumbent Mayor Sharon Robinson-Briggs is on the Nov. 3rd ballot.

Hitting mostly unaffiliated North Plainfield voters on his doorbell march today, Marks with Vastinehas so far knocked on 2,000 doors and campaigned in nine out of the district's 11 towns – all but the two Middlesex municipalities, in a district that most Republican observers rank, along with Legislative Districts1, 4, and 36, as targets of GOP opportunity this year, where at the very least the GOP has Democrats playing defense. 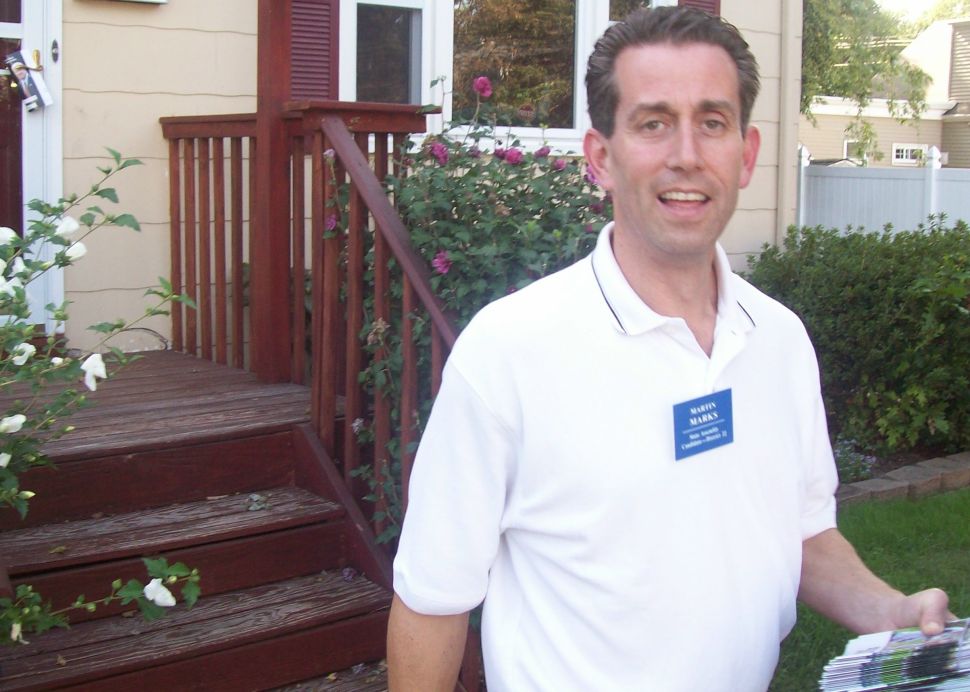