The Democratic-controlled Massachusetts Legislature, thinking John Kerry might win the presidency in 2004, changed state law to take away the power of the governor to fill U.S. Senate vacancies by appointment. They didn't want the Republican governor, Mitt Romney, replacing Kerry in the Senate with a Republican. Now that Democrat Deval Patrick is governor, there's a move to reinstate the power so that a Democrat can fill the late Ted Kennedy's seat on an interim basis.

New Jersey has not elected a Republican to the United States Senate since Clifford Case won his fourth term in 1972. But some Democrats, seeing GOP gubernatorial candidate Christopher Christie enter September with a ten point lead over Democratic Gov. Jon Corzine, have another worry: a GOP governor could send a Republican to the U.S. Senate, if a vacancy were to occur.

Frank Lautenberg will turn 86 in January and still has four years left on his term. No punches should be pulled here: there has been no shortage of Democrats posturing for a Senate seat in the event that Lautenberg does not finish his term, and Christie's healthy poll numbers has forced the realization that the next U.S. Senator from New Jersey could be a Republican.

If Christie wins, Democrats might need to replicate the Massachusetts law as an insurance policy on their Senate seat- and get Corzine to sign it before he leaves office in January. Democrats will especially want to prevent New Jersey's seat from flipping while Robert Menendez is the Democratic Senatorial Campaign Committee chairman.

Just last week, a Star-Ledger editorial endorsed a proposal by a Wisconsin Senator to eliminate all Senate appointments and fill vacancies only by special election. According to the editorial, 20% of American voters may be represented by unelected U.S. Senators in the near future.

If Corzine gets re-elected, clearly there will be no discussion about changing the law.

But Democrats should not assume Lautenberg won't run for re-election in 2014. He didn't exactly enjoy retirement the first time around — close friends say he regretted his decision not to run in 2000 almost instantly — and as long as he's healthy and popular, he could run again.

Political junkies need only remember the story of Theodore Green, a Democratic politician from Rhode Island. Green was 69-years-old when he was elected to the Senate in 1936. Because of his age, it was assumed that he would have a short career in the Senate. But Green went on to serve four terms, retiring in 1960 when he was 93. An entire generation of Rhode Island politicians miscalculated their political careers on the assumption that Green would soon retire. 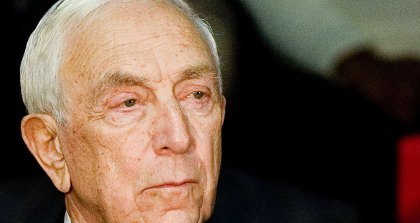