ATLANTIC CITY – Identifying the touchstone values of their party, Democrats bucked one another up here at the Trump Plaza Casino, trying to build feeling for what amounts now to the last 38 days of their campaign effort to maintain control of Drumthwacket and deliver another four years to Gov. Jon Corzine.

"I love you all," Corzine told his supporters ina room packed with party insiders, stirring into his speech humanizing buzz notes – farm boy, soccer coach, parent teacher conference attendee – to offset the image of an aloof leader who landed in Trentonthree and a half years agowithcomparatively little time honed at the street level of New Jersey politics.

Corzine noted his commitment to the vulnerable and poor – his move to enact the country's first economic recovery plan, broaden early childhood education and healthcare, and build new schools.

Echoing Bill Clinton with former Vice President Al Gore in the room, "I still believe in the family values my family taught me back on the family farm," said Corzine, who told the crowd that in his battle with GOP candidate Chris Christie "every value we hold dear is at stake."

"We had eight years of cataclysmic policies that ran our economy into the ditch," Goredrawled of Bush's back-to-back terms, which he identified as the reason for the country's economic downtown. "You can't separate cause from effect."

Chastising Christie for proclaiming that he wouldreject $2 billion in federal stimulus money if he were not convinced the money came without strings attached, a shocked-acting Gore said, "I thought that fellow in South Carolina was the only one who would do that."

The reference was to family values advocate turned flummoxed internationaladulterer Gov. Mark Sanford, good for a laugh line with this crowd, eating dinner while listening to the speech on the sixth floor of the ocean front hotel and casino.

Notoriously cautious in his 2000 "people versus the powerful" presidential campaign, Gore echoed themes from thateffortwiththeedge of someone who doesn't care anymore who he offends, going after the GOP as a party "that pretends to back people but which is really on the side of special interests."

Seekingcontrast, he packaged Wall Street veteran Corzine as someone who understands the economy – but who, as the son of an Illinois teacher, also has built-in reserves of compassion.

Reaching back to 2002, Gore also praised Corzine's "no" vote in the U.S. Senate on the War in Iraq, and what theglobal warming activist cited as Corzine's commitment to renewable energy.

Cryan, who sat on the dais with Corzine, Gore, Weinberg and Pallone, earlier in the evening invoked Gore's Academy Award winning movie on global warming when he said, "I have an 'Inconvenient Truth'' for Chris Christie, and that s you're going to lose on Nov. 3rd."

"Don't ever let Republicans take away what we've built here in New Jersey," Cryan shouted to cheers. "It's not going to happen."

But Christie leads in every public poll. 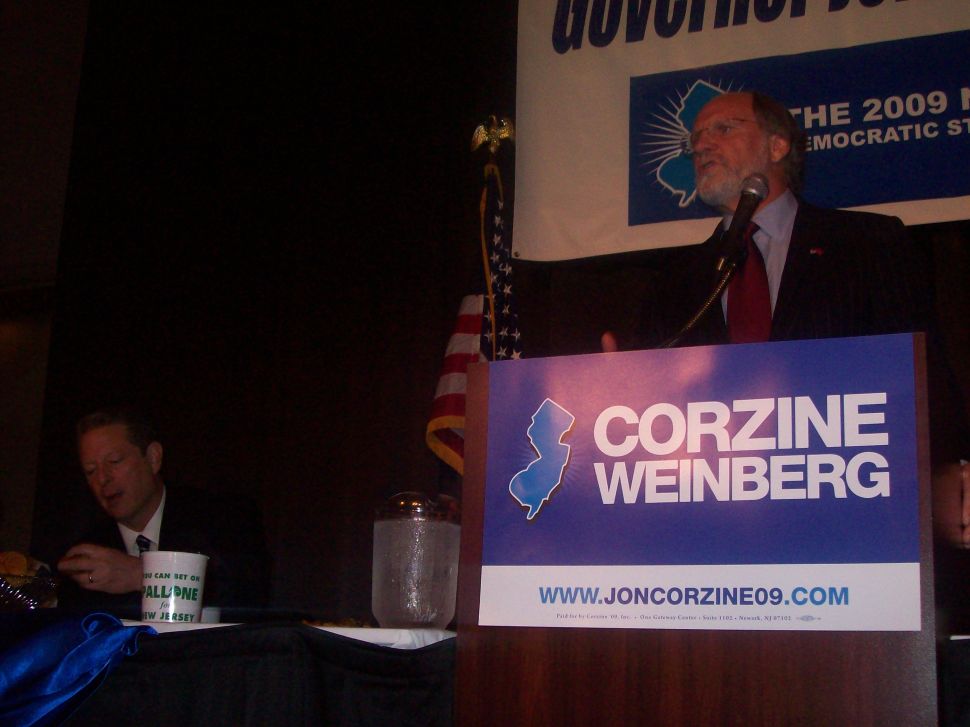