Power and how to wield it is a conversational topic that mighthave farawayassociations in amore quaint setting, but it generally arises with a fiercer kind of immediacy and urgency in a placewhere two ofa town's last three mayors endured the clamp ofhandcuffs- a place,for example,like Hoboken.

Whatever their private agonies about Zimmer and their public ambitions, that many peopletrying to elbow one another out of the way in a play forvoters' attention in a short time-frame election, makes the contest ostensibly Zimmer v. Mason, according to most observers – with the strong edge going to Zimmerearly as the incumbent who has her own built-in, green T-shirted base of support.

But sources say Glatt and Raia intend totalk this week to ascertain whether it would be better for one of the two born-and-raised candidates – traditionally a plus in this parochial Hudson River burgh – to exit the race and back the other in the name of consolidating an alternative to Zimmer and Zimmer's financially-well connected arch-rival Mason, neither of whom has Hoboken roots.

"Iam running to win," the owner of the Hoboken Shop Rite told PolitickerNJ.com."I feel I'm the only candidate who candeal with old and new Hoboken.I'm the only candidate in the race with a businessbackground – I created 200 private sector jobs with Shop Rite, and that helps when clearly the big issues are taxes, open space and affordable housing. Ido this stuff for a living. Other people talk a good game, butthey have helped the town go down.I helped Zimmer get elected. She told meshe wasn't pursuing higher office, andshe's done nothing for her ward. Let's face it, there's more to Hoboken than people riding bikes and walking around with dogs."

If both Glatt and Raia stick, however, born-and-raised bonafideslike Perry Belfiore reluctantlyacknowledge that Zimmershould win.

"If Mason doesn't win 40 percent of new Hoboken she loses because old Hoboken as usual can't get its act together,"Belfiore groaned.

The fact that corporate management consultant Masonintends to spend money on this race to bust up Zimmer's image is already evident.

The ad, designed by former Cammarano strategist Paul Swibiniski, who's now at the controls of Mason's massaging, labels the acting mayor/council president as "dual-job Dawn," and features close-ups of a scared-looking Zimmer defending her decision to retain her command position on the council while simultaneously serving as acting mayor.

A councilwoman from the city's 4th Ward who squared off against Cammarano in the mayor's race as the progressive reformer last May and lost in a June runoff, Zimmerassumed the oath of office this summer after Cammaranoleft amid street clamor demanding his resignation in the face of federal corruption charges.

Mason's opening salvo adflanksthe acting mayor withTammany Hall top hats in an attempt to brand her as the worst example of a public official becoming what she once beheld and loathed – a kind of John V. Kenny, who ran as a reformer candidate against Mayor Frank Hague beforefalling into the gears of his own patronage machine.

"I have to run the risk of not winning the election or possibly losing the forth ward seat,I don't think that's fair for me," the mayor explains in the ad, speaking from city council chambers.

"But what's fair for Hoboken?" the voice over asks in response."As mayor, Zimmer sets the agenda. As council president, she decides it. That's too much power. Tell Zimmer to give up the council seat because holding both jobs is just wrong."

"It crystallizes the issue, although I would have used two faces instead of two hats," said the old Hobokenite. "OnlyDawn's real tight Kool Aid drinkers can rationalize this naked grasp for power, whichwould not be condoned if it were a Belfiore or a Russo trying to serve as both council president and mayor.Her apologists are even having a hard time explaining it away.Remember, a'reformer' is code for someone who wasn't born; andhere we have someone not born here imposing martial law."

"Dawn serving as president and mayor is within the rules of order governing," saidMarsh."Not only is Dawn following the law but she's doing the right thing anddoing a great job given the circumstances."

Zimmer's campaign says it's a non-issuegivenMason's abstension when the vote went before council.

"Beth Mason knows full well that Dawn Zimmer is serving in an Acting Capacity as Mayor for a very limited period of time in a very unusual set of circumstances," said campaign spokesman Sam Briggs."For Mason to attack Zimmer as if she was a conventionaldualofficeholder who was going to have two elected positions for the long-term is a desperate tactic by a candidate grasping at straws to find any rationale to run. We already know from Mason's votes on Church Towers and her sponsorship of the Northwest Redevelopment Zone the last time she ran for Mayor, that she will say or do just about anything to get elected."

Zimmer'sallies further point out that the mayoris only collecting the mayor's $115,000salary, while foregoing her council stipend.

Trying to find that seam line to sneak through and be the man, Raia consigns both Mason and Zimmer to the scrap heap of bad governance and mismanagement.

"Beth Mason doesn't have a prayer," said the perennial candidate for public office."She was with (3rd Ward Councilman and longtime Raia foe, son of former Mayor Anthony Russo, who served time for federal corruption charges) Russo, trying to buy everybody with her money.And Dawn Zimmeris not mayor's material. She's got all these smoke and mirrors issues – dogs and parks. I loved that stuff too, when I was a kid, but we've got real problems here.I don't believe she should beholding two jobs the way she is, holding the town hostage. People say I run too much?The town's in the shape it's in becauseI didn't win. Give me a chance, and you'll see medonate my whole salary. I'm the real guy to dothe job."

To early doubters who say Raia's run to many times and won't put up the dough to be credible in an arena with a big money challenger like Mason, Raia said, "I'm going to spend whatever it takes to win."

If Mason's cannonade sufficiently weakens Zimmer whilesimultaneously back-firing on the attackeras a big money mud-slinger, Raia figures he has hisbest shot to come up the middle between two damaged brands, once again working the "kid from the neighborhood made good" argument.

Glatt figures she has the same shot – with the additional born-and-raised gravitas points created by her backgroundas a retired municipal judge.

Mason has Swibinski, the campaign mastermind behind Cammarano; thecase of Zimmerassuming too much power, particularly as a self-identified reformer;and the belief that her backing of Zimmer in the runoff election with Cammarano provided the energy boost Zimmer needed to competively run the last neck of the contest.

AndZimmer, who's once defeated Mason in the May mayoral,starts withthe political trampolineof the mayor's chair; her base, battle-tested in two citywide campaigns, whichfailed to upend Cammarano by fewer than 200 votes in their runoff; and her dedicated profile as the anti-Cammarano, whom angry voters, along with Gov. Jon Corzine's legal team, ran out of office in the aftermath of his arrest. 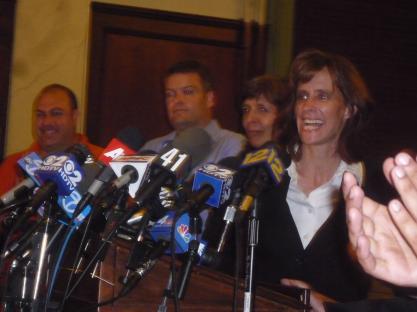