HOBOKEN – Those exhausted by head-to-head Hoboken politics will have to gut out yet another round in the aftermath of Mayor Peter Cammarano's late July fall down, which cleared the way for now-Acting Mayor Dawn Zimmer and 2nd Ward Councilwoman Beth Mason to recharge, resetand redo.

Zimmer hopes the resultof an encounter with Mason will bethe same as last time, when she quickened theMason campaign's May meltdown and earned a berth in the runoff with Cammarano, which she lost by fewer than 200 votes.

Cammarano subsequently exited,resigning the mayor's officeamidfederalbribery charges – and now Mason's back, arguing that she has the best professional profile and public record to delivera real era of reform to Hoboken -anda plan to win this time.

She formallykicked off her campaign tonight at the Brass Rail,chastising Zimmer for losing her way in the thicket of City Hall.

"The current Acting Mayor Dawn Zimmer has decided to serve simultaneously as both Mayor and City Council President," said Mason."This choice has effectively eliminated any separation of powers between the Executive and Legislative branches of our municipal government.

"For my entirecareer, I have felt that dual-office holding is a disturbing violation of democratic principles. The result is too much power in one person’s hands.Anyone who is truly committed to reform must understand that he or she is not above the values that we all share, regardless of circumstances and individual ambitions."

The remark carried a hard edge of payback, as just months ago it was Zimmer putting Mason on the defensive about her reformer credentials, as the 2nd Ward councilwoman assembled a squad of old Hoboken candidates andrepeatedly ran intothe reformer thunder of Zimmer's "new look" team.

Backed by veteranDemocratic Partyoperative Paul Swibinski – who messaged andpackaged Cammarano's winning campaign – Mason saidshe pulled the trigger on a special election after becoming convinced of a way to win.

"NowI have a plan to win," said the management consultant who came to Hoboken 25 years ago and started working as a junior public relations assistant at $14,000 per year."I don't like repeating things, so if I can, I make sure to get them right the second time.I ran forthe 2nd Wardcouncil seat twice and won the second time. You learn from your mistakes and from your professional experience.

Democrats terrified of Gov. Jon Corzine's losing prospects in the Nov. 3rd election are privately exultant about a contest in Hoboken, the governor's hometown,where Democrats outnumber Republicans,12,278 to 2,994. But stung by the Cammarano story, the State Democratic Committee intends to stay out of the mayor's race, sources say, leaving powerful state Sen./Union City MayorBrian Stack to play there if he chooses.

Stack has built a relationship with Zimmer in the weeks since Cammarano's departure. They'd actually already established political contact, according to sources, who sayStack and Zimmer met the same daythe charges came down at a face-to-face they had scheduled prior to the corruption newsflash.

At one time hopeful of Stack's backing that neverarrived in her first run for mayor,Mason, who like Zimmer hasn't publicly endorsed a candidate for governor, said she's all Hoboken, and emphasized that this is a nonpartisan contest.

"Yes, this is a democracy and it's good to have a contest," said the councilwoman, "but the city needs confident professional management and transparent government and that's my expertise and my track record."

Mason offered herself as the only candidate in the race for mayor who voted against the tax increases in the last budget.

Zimmer abstained from voting on the budget.

Zimmer and Mason will not be the only candidates in the race.

Sources say Municipal Court Judge Kimberly Glatt resigned effective Wednesday morning and plans to file to be a candidate for mayor.
Businessman Frank Raia is also expected to file before this afternoon's deadline. 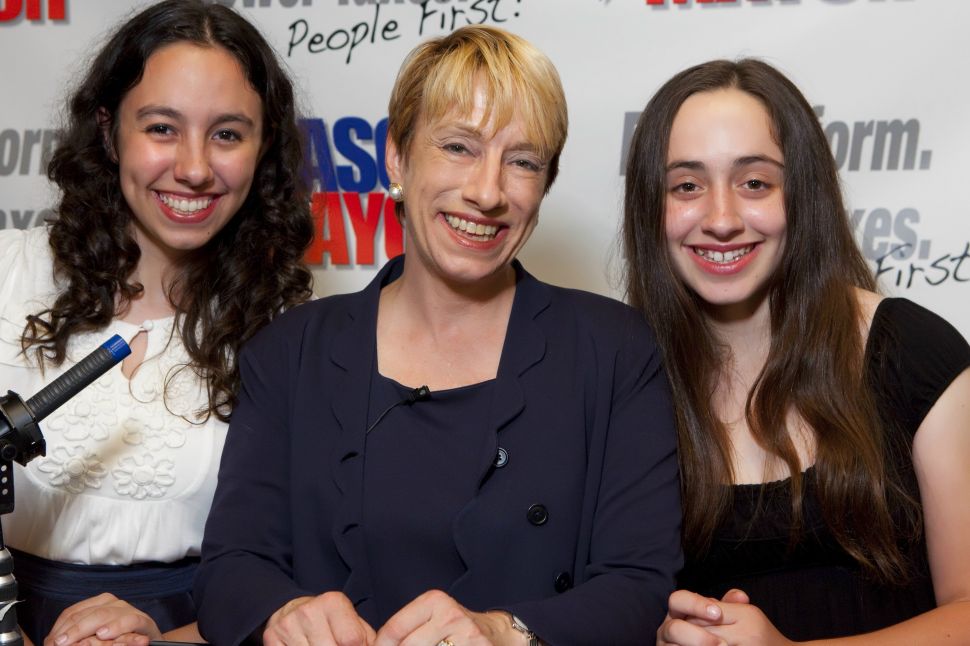