The Middlesex County Democratic State Assembly delegation will back John Wisniewski (D-Sayreville) for Assembly Speaker, potentially giving him an early lead in the race to succeed Joseph Roberts. Joseph Spicuzzo, the Democratic County Chairman, announced the unanimous support of the delegation in a press release issued this evening.

In January, New Jersey will need a new Assembly Speaker who will represent the middle class, the middle ground, as well as the middle of our state," Spicuzzo said. "No one will do a better job of bringing people together for the good of New Jersey than Middlesex County's own Assemblyman John Wisniewski.

Roberts recently announced that he will not seek re-election to the Legislature, where he has served since 1987. Assembly Majority Leader Bonnie Watson Coleman (D-Ewing) has said she will seek the post, and Assemblyman Joseph Cryan (D-Union), the Democratic State Chairman, is considered a leading candidate for Speaker.

The Middlesex base could bring Wisniewski as many as ten votes in his leadership bid, depending upon the outcome of the general election.

Three Democrats who live in Middlesex are likely to win re-election to the Assembly in November: Peter Barnes (D-Edison), Patrick Diegnan (D-South Plainfield), and Joseph Egan (D-New Brunswick). Linda Greenstein (D-Plainsboro) is favored to win re-election, as are Wisniewski and his running mate, former Judge Craig Coughlin in the 19th district.

"He's got my support," Chivukula said.

This could pose a problem for Greenstein, who has been included in some counts as a Watson Coleman supporter. The district she represents with DeAngelo is about half Mercer, where Watson Coleman is from, and half Middlesex. 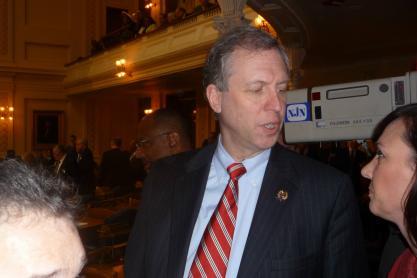