Oliver's chances of becoming Speaker could be boosted by a leadership change in the upper house, where Senate Majority Leader Stephen Sweeney (D-West Deptford) is considering a challenge to Senate President Richard Codey (D-Roseland). It is unlikely that Essex Democrats would get both slots, and more likely that they would if the Senate Presidency goes to South Jersey.

The 57-year-old Oliver is seeking her fourth term in the State Assembly this year. She represents District 34, which includes East Orange, Montclair and Clifton. She is a former Essex County Freeholder and East Orange Board of Education President, and lost her bid for Mayor of East Orange in the 1997 Democratic primary by just 51 votes. She is currently the Assembly Deputy Speaker Pro-Tempore and the Chair of the Assembly Human Services Committee.

Assembly Speaker Joseph Roberts (D-Camden) announced on Wednesday that he would not seek re-election. Roberts has been an Assemblyman since 1987 and the Speaker since 2006. 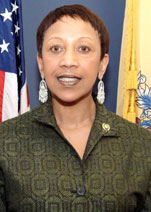