MONTCLAIR – Thursday night was U.S. Rep. Bill Pascrell's (D-Paterson) turn to walk the gauntlet of rage among those anti-Obama forces fearing government-run health care. Given Pascrell's propensity to turn into the old street fighterat the sign of aggression, his allies worried privately that this encounter with right-wing critics objecting to his championing of a public option could turn into a brawl.

But it didn't, as Pascrell combined gut-level anger over the lack of coverage for 77,000 constiuents in the 8th District and 45 million Americans whenever someone challenged him in aprovocative tone, section-by-section quotations from the House health care reform bill,and patriotic invocationto back up his arguments.

"You're going to put all the pizzerias in this district out of business with this bill," a woman told the congressman, suggesting that communisimlurked behind the healthcare legislation.

About 900 people packed the Memorial Theater here on the campus of Montclair State University where the crowd appeared split in half between those supporting the public option as part of the healthcare reform favored by Pascrell and those against it, with the edge going to the Pascrell team over the course ofhis two-and-a-half plus hour performance.

"I'm from Paterson, New Jersey – I believe regardless of where we stand, we respect each other, our neighbors," said Pascrell, who lamented what he described as Republican leaders' unwillingness to work with President Barack Obama on healthcare reform. "I'm asking all of you – not in anger – I'm simply appealing to your senses to respect the opinion of others as well."

The worries poured forth in the question and answer session, in which the congressman obtained written questions pulled out of boxes marked "pro," "con," and "undecided" and called on those who had made the submissions.

Wasn't this the first stage in Obama's plan for a complete takeover by government of healthcare; how wouldn't the proposal bankrupt the country, and wouldn't it burden American citizens by glutting the sytem with the care of undocumented workers; why not tort reform instead of health care reform?

"The fact of the matter isBarack Obama does not want socialized medicine," Pascrell said. "Right now, in this country, 50% of the population is covered by some kind of federal plan. You wouldn't want to stop that, would you?"

He read directly from the bill to deflectthe question about undocumented workers.

"From the legislation out of all three House committees – undocumenteds are in no way, shape or form elligible," Pascrell said.

"You give me tort reform that will bring down premiums and I'm there," he said.

While a crowd in Red Bank that attended U.S. Rep. Frank Pallone's (D-Long Branch) town hall forum contained a cross section of public option supporters, Pascrellleaned on morevocalbacking bucking up his half of the crowd.When a woman said she was embarrassed to admit that the people who cared for her dying parents didn't have health insurance, Pascrell ripped off his jacket amid cheers.

"I lost my mother in April – she was 95," he said, then added – "Too many people who come to my office or write to my office have no insurance. I have no animosity against those who disagree with me, but we're talking about a Congress that ten years ago didn't have the guts to address the issue. We're talking about insurance companies that made commitments to people they didn't fulfill. Insurance companies need to have some skin in the game. We need to have some presence of government in there because private health insurance companies haven't provided healthcare.

"There are a lot of things, in my estimation, that government doesn't do well," Pascrell said. "But there are certain things they do very well and we need to distinguish between the two. Before Medicare, before Social Security, 65-70% of seniorsfaced their final years inpoverty. …Both presidential candidates last year admitted the health care system is broke. Now, I'm committed to fixing it, not making it worse. I've been to Iraq and Afghanistan seven times in the last seven years, and every time I come home, I kiss the ground. This is the greatest country in the world, and we need to raise our commitment and lower our voices to make sure we get health care reform."

Certainly it had looked like it would get ugly early as the congressman pitched his case for the public option, arguing that to do nothing would be catastrophic when insurance premiums are risingsix times faster than wages. He stopped several times as anger welled in the crowd, set his jaw and waited asthe wavepassed before telling his audience that he intended to get to their questions after three stories.

In the age of the Internet, one spoken word story would be painful enough, and now he was urging patience for three even as a lot of people out there in the crowd couldn't wait to get their hands on a microphone.

"Ridiculous," said one man, and left.

Then the first of three speakers rose on the stage and went to the microphone.

When the crowd learned that Wendell Potter was there as a penitent, self-describedformer insurance company chiseler and journalist who learned theerrors of his ways enough to be able to summon a publicapology, the boos rained.

Most of his presentation was subsequently inaudible, and it appeared for a moment that the event would spiral out of Pascrell's reach as shouts of "Who paid you to do this?" angrily rebounded out of the din of outrage and threatened to bury the unknown and soft-spoken commodity Potter.

"Wall Street investors have benefited more than hard-working taxpayers," he tried, engulfed by a chant of "Turbo taxes! Turbo taxes!"

People in Uncle Sam hats and toting signs with red hands on them and the words "Hands off my health care" were starting to feel snookered.

Hishandlers had said the congressman as a former Paramus high school teacher typically can't resist the urge to impart a lesson, but to the most ardent anti-Obama activists this was turning into a four-part lecture, and no one had yet had the opportunity to engage Pascrell.

"What happened to the questions?" was a solitary cry of anguish in the auditorium.

"You work for us, Bill," another man screamed, and then to thecabinet maker, "Get off! Get off!"

At the podium again, Pascrell looked – only briefly – less like a seasoned classroom prothan a study hall stand-in about to take a drubbing from a mob, just before he went on the offensive, getting especially animated when he countered a speaker's point about undocumented workers being elligible for health care.

Asked by a televison newsman after the event if the mood swing in the crowd that went from agitated and angry tonear steadysilence by the end of the two hours was simply indicative of public exhaustion over the whole issue, Pascell said, "I don't think people are exhausted from it, I think they're learning as they go along. They're reading the bill. Some have been egged on by a lot of people, but I love the people of this district. There's anxiety out there. It's not created on another planet."

A regretful "aye" vote on the Iraq War seven years ago who blamed President George W. Bush for screwing up "royally," Pascrell pulled the trigger too on last year's big, controversial banks bailout bill after much public agonizing. This evening, he reiterated in close-quarters interviews his disappointment with comments made by U.S. Sen. Jim DeMint (R-S.C.), who said a wrench in health care would be tantamounttoObama's politicalWaterloo.

"I think that comment says a lot," said Pascrell, who added that he's confident the president would remain solid in his support for the public option despite recent commentsObama made suggesting otherwise.

As for the more bitter exchanges, particulalry those that punctuated the first half of the program, the congressman said discourse is the essence of the country. Moreover, "I was mayor of Paterson. This is a day at the beach for me, believe me." 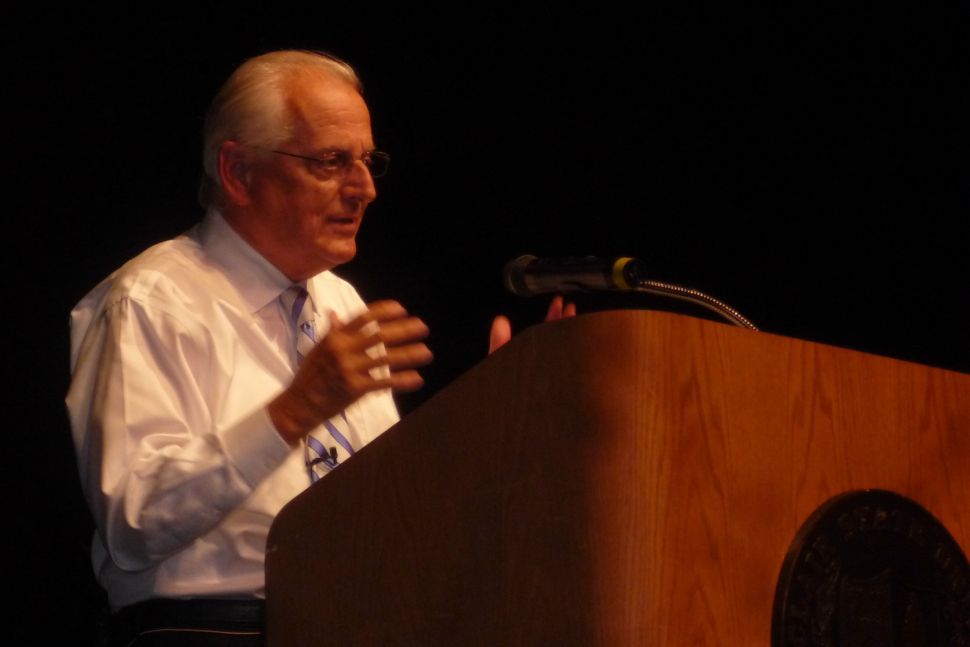