NORTH BERGEN – When Gov. Jon Corzine goes to the front of the packed room at the annual senior picnic in Scheutzen Park, he embraces state Sen./Mayor Nicholas Sacco (D-North Bergen)and thenturns to the crowdandcalls Sacco the "best mayor in the State of New Jersey."

"I love working in North Bergen because he delivers," Corzine shouts.

Although they live just a town apart here in Hudson County – which, of course,Corzine made certain to point out -there'smore than concrete between Hoboken on the Hudson River side of the county with its Lipton Tea view of Manhattan -and North Bergen, which juts above Secaucus and the swamps of North Jersey.

Corzine and Sacco havenever been eyeball to eyeball on issues or shared the same political fiber.

A dual-elected office holder for close to two decades, Sacco came from this world,while Corzine the Wall Street exec. came to it; and whether it was Corzine's attempts to ban that practice – which resulted in legislative leadership grandfathering Sacco and others-or education reform, or even Corzine's allies'decisison to run political communication lines through Jersey City Mayor Jerramiah Healy, leaving county outlanders Sacco and state Sen. Brian P. Stack (D-Union City) bristling in North Hudson, this relationship has mostly been devoid of tender kinship.

Butin a Democratic Party stronghold like this come election time, where the mayors of both Hoboken and Secaucus went down in a summertime corruption bust,North Bergenis critical turf for Corzine, who's in a tough bid for reelection against former U.S. Attorney Chris Christie.

"I love you," he tells the crowd of seniors sitting at round tables under the big chandelier,whoafter finishing sandwichesare drinking soda or beer in plastic cups and waiting for the musictolaunch the dance competition at this event that Sacco sponsors.

Whenhe hands off to Corzine,the governor compliments the veteran mayor/legislator then goes straight to senior issues.

"I don't have to tell you,"he tells the crowd, "you've been through wars, but we're in one of the hardest times in the last 70 years. We've done things to protect you in these times. Anybody in this room who makes up to $80,000 a year, make sure you go apply for your property tax freezes. If you down to City Hall, I'm sure Mayor Sacco will be happy to help you fill out the forms. Check it out."

Corzine works the room after his speech.

"I'm a Democrat," says Sacco as hewatches the governor go table to table before a political operative urgesthe mayorto go and pose for pictures with the candidate.

"I will work hard to reelect Gov. Jon Corzine," says the North Bergen leader."These are difficult times in New Jersey, and he's doing what he can." 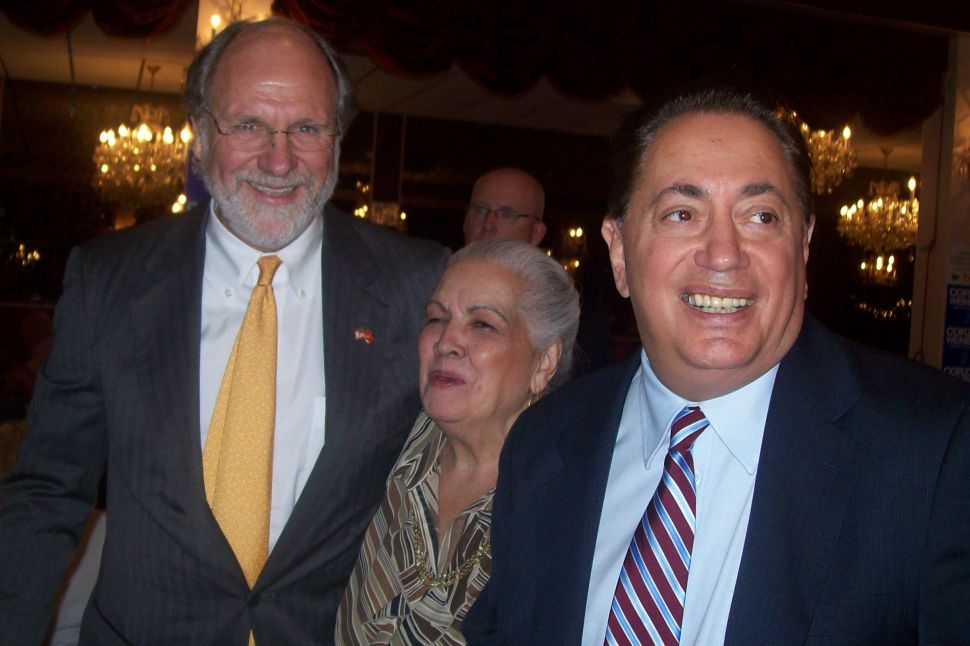