Examining the Spring 2010 Fashion Weekschedule—and how futuristic that date seems; why are we not walking around in plastic spacesuits as Courrèges forecast?—one is struck by how designerly the whole affair has become—not about Cindys and Lindas and Naomis but Doo.Ri and Charlotte Ronson and Tory Burch.

This is partly thanks to idiot shows like Project Runway, of course (now anyone, from Alabama to Antwerp, can make clothes). But a symbolic debt is also owed to the president of the Council of Fashion Designers, a near-universal idol of New York women: Diane von Furstenberg.

A refreshingly unstarched 63, Ms. von Furstenberg, with her memoirs, her bustling civic involvement, her mysterious marriage to mogul Barry Diller, appears to be at the peak of her game. Fashion Week may be technically at Bryant Park, but its heart beats downtown, in the meatpacking district, where West 14th Street has become an international shopping district that arguably surpasses Madison Avenue: Stella McCartney, the complex of Scoop stores, the department store Jeffrey.

Anchoring it all is Ms. von Furstenberg’s headquarters on Washington Street. “Gawgeous,” said a visitor in white Capri pants there on Labor Day, standing outside the DVF store on street level and inspecting a display of belted turtlenecks, boots and beads.

The building is topped by a glass-paned hivelike structure through which guests at the Standard hotel may glimpse the designer doing her yoga postures, like a gawgeous Louise Bourgeois spider. At night, the lower windows of the building glow pink, green, and blue, while tourists from Brooklyn lounge on deck chairs on the cool and verdant High Line park that she and Mr. Diller helped sponsor.

With all the roles that Ms. von Furstenberg plays—mother, grandmother, leader, New York historical figure—her appeal as a designer (not a trendsetter, but someone who makes moderately priced, idiosyncratic things that sell well to upper-middle-class women who’ve graduated from Ann Taylor but don’t feel up to Carolina Herrera) is sometimes overlooked.

“I love it,” said a woman in her 20s in skinny jeans and reptilian shoes who was trying on a white, furry vestlike creation this Labor Day. “Do you have it in a 2?” (There were charms dangling from her blue Chanel quilted purse—maybe we’ve turned the corner on that recession!) A salesgirl wearing a dress printed “Love is Life” and comfortable flats went to fetch the garment.

On the racks were items for fall, half-practical, half-fantastical: silk-lined camouflage corduroy pants for $298; one of those big blanketlike belted cardigans (part acrylic) that everyone wears now instead of jackets, for $365; and a “pom-pom” bag, resembling an oversize Tribble, for $950. At the end of the store hangs the famous Warhol of young Diane in what looks a signature wr*p dress (she has chafed at the constant association with her most famous design), with her arm flung in a display of nonchalance above her head.

It was the dresses, and the sexual independence they signaled, that made Ms. von Furstenberg, the daughter of an Auschwitz survivor and the former wife of a Swiss prince, famous in the 1970s. About 10 years ago, they were revived, and have now entered the realm of classic, despite debates about how truly flattering they are. It seems urban woman cannot give up on the dream that their wardrobe problems might be solved by one frock, even as they fill their closets with versions of the new stuff that will begin hurtling down runways Sept. 10.

“Jen, let me see?” asked a shopper, watching a friend try on a black wrap. “It’s pretty. It looks nice.” Jen adjusted the ruffled neckline a little higher and disappeared happily behind a dotted curtain. Nearby, a woman in her 40s or maybe 50s, her face covered in pancake makeup, was trying on leather-trimmed leggings. Another, younger lady was carrying a New York Review of Books tote as she perused the racks. Downstairs, a daughter lounged on a magenta couch while her mother examined herself in the mirror.

The guest book was a priceless collection of Dear Dianes, including an entry from Ms. von Furstenberg’s granddaughter, Talita, suggesting she try “tank tops with pattern—they would sell quick.”

I got nachas reading about you in The Times last Sunday! I have been enjoying your styles for 33 years!

Please enjoy my money I just spent it all here, L.

“In the middle of a tsunami, we can’t change everything,” glam Diane told designers during a CFDA town meeting last July. “But I would like to make New York Fashion Week the most dynamic in the world.” 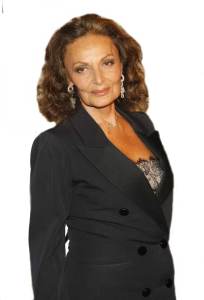