Republican gubernatorial nominee Christopher Christie opened a Newark campaign office and gave a policy speech with few new policy details. Plans for a third televised gubernatorial debate fell through after Governor Corzine refused to participate. Corzine put out a new television ad touting his record. Independent Chris Daggett went up with his first television ad – a funny one, if not entirely original. And a Rasmussen Reports poll showed Christie continuing to lead Corzine by a significant margin (8 points), though by a smaller margin than last time, while James Carville's Democratic poll showed the race remaining close. So who won the week?

For the most part, pundits said, it was a tie – though Daggett gets points for his commercial.

The week was marked by small ups and downs for the two major party candidates. A number of internal and external polls came out, all with Christie once again in the lead, but by slightly smaller margins than in the past. Christie continued his forceful drive into the Democratic base by opening an office in Newark, but the power of that move was muted by remarks from his running mate Kim Guadagno about feeling unsafe in the city.

Corzine's new TV ad touting his record was certainly his camp's best effort so far at explaining why he should be re-elected. However, the ongoing leadership battle among Democratic legislators is hogging some of the media coverage which Corzine wants to keep open for negative news about Christie.

This week also saw independent Chris Daggett unveil his first television ad, which features Christie and Corzine doppelgangers stuck on an escalator. While it's unlikely that this ad will lead to a large infusion of cash or a spike in his poll numbers, it got the best press of any campaign-related story this week. And you've got to admit that it was pretty funny. On that basis, Daggett won the week.

This week was a split decision. Corzine remains down in the polls, but Christie's lead is steadily decreasing (and the eight point Rasmussen lead is within the poll's margin of error). Christie's support appears soft (take away the "leaners" and his edge is only four points). While most challengers would be delighted with a four to eight point lead in the polls, that soft support should cause the Christie campaign concern because those "soft" supporters will be more likely to be swayed by the extraordinary amount of advertising we'll see coming out of the Corzine campaign in the weeks to come. And this is advertising that Christie will not be able to match dollar for dollar because of his acceptance of the public campaign financing option. On the other hand, both candidates are their campaigns were sidetracked — Christie's campaign by the spin on Kim Guadagno's statements about Newark while opening up headquarters there and Corzine's dodging the League of Women Voters debate. So this week's a toss up…

I'd call this week a draw. Christie didn't seem to be damaged by the motorcycle accident story that NJN broke late last Friday, and he dodged a bullet when the Office of Special Counsel decided not to investigate his conversation with Karl Rove. Daggett received some national attention for the "escalator commercial" his campaign released. Finally, for the Corzine camp, the public and the pundits are still digesting the bad economic news released this week (increased unemployment, increased number of people living below poverty and a declining income level relative to other states in the region), which undoubtedly will be used to criticize the governor in the next few weeks.

All in all a quiet week, with a couple of polls that indicate no significant movement in voters' preferences, allowing each side to spin the numbers in a favorable light for their candidate.

With the Q and FDU polls last week, the Christie campaign put away the notion their candidate was damaged by imprudent loans and incompetent driving. But in Obama's televised speech this week, Corzine got needed help in moving aside an unanticipated campaign sandbag: health-care reform, a national issue that has been providing oppositional Republicans with a rallying point and ratings-driven peddlers of self-righteousness with talking points.
If the White House wants to make dramatic change in health insurance the hallmark of a successful presidency, then it can't suffer a series of referenda at the state level on numerous complex and poorly understood proposals. Corzine needs Obama to help solidify his base, not make it nervous.

Both Christie and Corzine began reshaping their campaign messages now that Labor Day has passed. Christie gave his major address in Paramus, which restated much of his previous positions in a new way. Corzine began his positive campaign in the media to educate voters on what he would describe as his major accomplishments. Moving forward, this race will still be hard hitting but I would expect it to revolve around policy issues, rather than personal ones. We saw the beginnings of this over the past week with Corzine challenging Christie on the use of $2 billion in federal stimulus money that was directed towards education.

The polls continue to show Christie holding a lead (obviously a plus for the Republicans), but it does seem to be shrinking from where it used to be (a plus for the Democrats).

The race, as many predicted, is shaping up to be a referendum on Corzine. The question for campaign watchers will be: on what basis are we judging the Governor? Christie wants voters to make a gut decision: are you better off now than you were 4 years ago? If no, then vote for someone new. Corzine understand that it will be a referendum on his first term, but he wants the debate to be about specifics – who has the better plan to lead the state out of the Great Recession? If the debate is about specifics, then – like the Byrne/Bateman race in 1977 – the unpopular incumbent Democrat might get a second look from the voters. 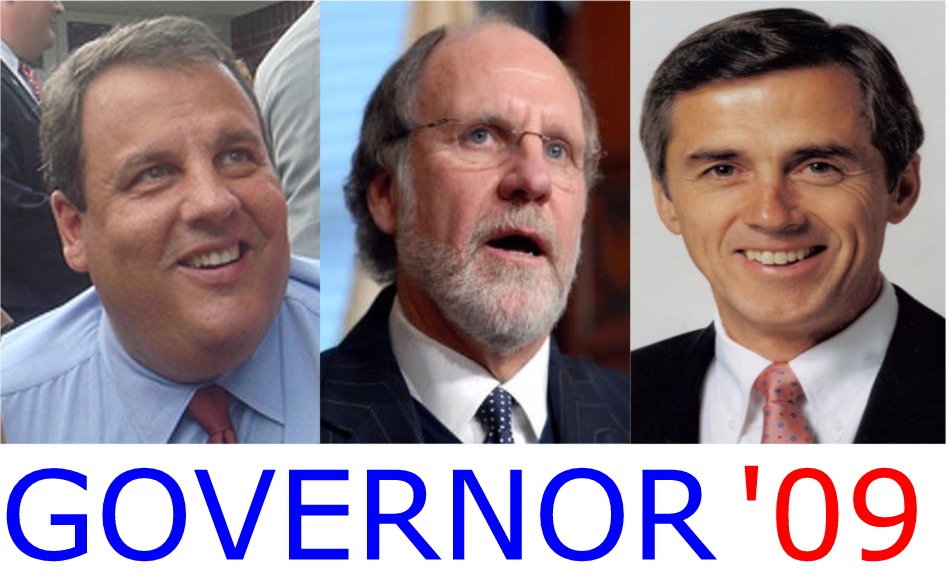